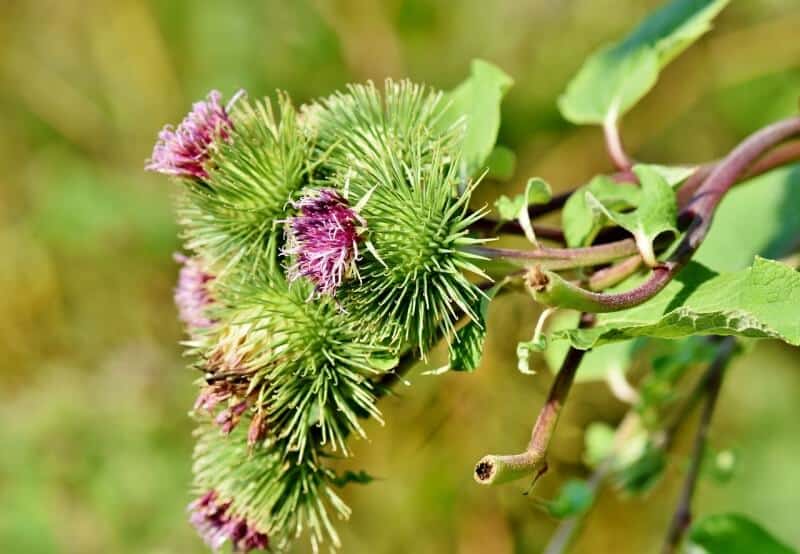 If you’re looking to improve your health and enjoy a tasty meal at the same time, look no further than your own backyard. Burdock is a common herb that many people have growing wild on their properties. It can be quite annoying to encounter when you are walking in the woods, as it has small hooking burs that can latch onto your pants or socks.

Annoyances aside, we’re willing to overlook a lot if a plant serves an important role. And burdock does, performing a vital role in the ecosystem.

But you’re probably wondering…is it edible?

However, this flowering biennial has some pretty powerful nutritional qualities. It’s also quite tasty when cooked correctly. If you have burdock growing nearby, don’t mow it down quite yet – consider all of these reasons to snack on burdock after your next walk in the woods.

Although many people scorn burdock as a simple backyard annoyance, if you’re a homesteader, you may have wondered from time to time whether this unique plant is edible.

While you’ll want to be careful harvesting it, as the burrs can be prickly and there are look-alike plants that are actulaly toxic, burdock is more than edible – it is good for you.

It also tastes great when prepared correctly. Burdock has multiple medicinal purposes, making it a must-have item in your homestead medicine cabinet. Since it is found just about everywhere and has a unique taste that lends itself well to many dishes, it is also not only edible, but a prized kitchen staple.

A unique plant found in most areas of North America, burdock is in the same family as thistles, daisies, dandelions, and chicory. There are more than three different kinds of burdock on this continent, including varieties that are imported and those that edible.

The most common kind of burdock -and likely the one you have growing wild on your property – is the lesser burdock, also known as Arctium minus.

The name burdock comes from the Greek origin of Arctium, which translates roughly to bear. This is in regards to the brown burrs that appear on the plant. Burdock grows to about two feet in length and produces lean white roots.

This plant grows from knee to shoulder height and can be found in every state except Florida. While other types of burdock like wooly burdock and great burdock can also be found, it is quite easy to tell these species apart. Great burdock grows much taller- up to nine feet tall – while woolly burdock has fleecy-looking flower heads.

Burdock grows in sun or partial shade, and in any kind of soil with adequate draining. If you’re looking to get rid of burdock, it can be quite a challenge, as it grows a loose taproot. You can find burdock growing just about anywhere, including in disturbed soil, underneath bird feeders, roadsides, barns, or fence lines.

Where is Burdock Found?

Despite being found throughout most of North America, burdock is not native to this continent. It was found originally in portions of northern Asia and Europe but now is found to an almost invasive extent in the United States. It grows prolifically, establishing itself just about anywhere it can set hold.

In the United States, this plant is viewed mostly as a weed. However, many Asian and European cultures propagate the plant as an important source of food and medicine.

Luckily, this plant has powerful properties as a holistic medicine. While burdock is considered a weed by many, it has so many benefits that you should avoid destroying it the next time you find it growing on your property.

What are the Health Benefits of Burdock?

Burdock has a number of health benefits that should not be overlooked. For example, this plant has extensive antibacterial and antifungal properties. It also has powerful anti-cancer properties that rival those of broccoli and cabbage. It’s also a diuretic.

Burdock has a number of important nutrients and amino acids, including:

Burdock is a powerful vector for important antioxidants. It is highly effective at protecting cells in the body from damage and can reduce the overall inflammation your body has. It is high in a number of notable antioxidants including phenolic acid, quercetin, and luteolin.

This plant can also help to remove toxins from the bloodstream, improving your circulation and reducing your risk of cancer. Some people even suggest that burdock can be an aphrodisiac, a suggestion that is supported by laboratory research on rats as well as anecdotal tales.

Burdock can help treat skin issues, too. You don’t have to eat it but can instead apply the root topically to resolve problems like psoriasis, acne, and eczema. In some cases, it can even help alleviate burns on your body.

Burdock was used by Native Americans to treat health problems ranging from venereal disease to rheumatism – even to treat kidney stones and scurvy! Burdock is commonly consumed as a tea to help calm irritated mucous membranes and relieve the common cold.

Are There Any Risks Associated with Eating Burdock?

There has been little formal research on the success of burdock as a medicinal treatment, so as a result, there is also little information about any potential side effects that eating burdock may have. Children, the elderly, and pregnant women are specifically cautioned to avoid eating burdock due to this lack of information.

Other than that, burdock is considered to be safe to eat. You need to be careful about harvesting it, however, as the plant closely resembles the belladonna nightshade plant. This plant is toxic and the two often grow side-by-side.

Remember too that burdock is a natural diuretic, so you should not consume it if you are already dehydrated. If you have allergies to daisies or chrysanthemums you should also avoid burdock, as the allergens are linked.

Can I Grow Burdock?

It is easy to grow burdock at home. Because this plant is a biennial, it won’t do much during its first-year of growth – besides produce delicious roots, that is.

During the first year, the plant is expending all of its energy on gathering energy. This energy is stored in the roots of the plant throughout the cold winter months, which is then used to fuel spring growth. As a result, the roots should only be gathered from first-year rosettes, as most nutritional value will be gone after that.

While you harvest burdock in the first fall or second spring, it grows quickly before this. There usually is plenty of root material to harvest even after just a few months of growth. Keep in mind that although burdock is easy to grow, it is easiest to harvest before it has put on a lot of growth. Burdock can be difficult to dig up once the roots are mature.

Planting your own burdock in established beds of loose garden soil can help make this chore a bit easier. Burdock grows just fine in compacted soil, but cultivating it yourself in ideal conditions will make harvesting much easier.

How is Burdock Prepared?

Most people consume the roots of the burdock plant, but you can also extract or distill the oil from the plant. In fact, burdock oil is often consumed by people who choose to take a burdock supplement.

To harvest burdock, wait until the fall. Because the plant produces such a hefty taproot, it may be helpful to loosen it first. You can eat first-year roots raw, or you can slow roast them for a few hours to give them a sweeter taste. Older roots should be boiled for twenty minutes before cooking. You can also eat the stems, leaves, and leaf stems of this plant.

To harvest burdock, be very careful. The roots go way underground and the tips of the roots are very fragile. Unfortunately, these are also the best parts of the plant to eat.

Try not to pull too hard or be reckless with your shovel. Instead, look for places where there are multiple plants growing in close proximity. Dig a two-foot-deep hole near the plants and then use your hands to gently pry the roots sideways out of the hole.

Once you’ve dug your roots, you can chop off the top few inches that are rough and dark in color. Throw these out and only eat the tender parts of the root. Peel them with a vegetable peeler. After that, you can grate or chop your burdock to be used in cooking.

Looking for culinary inspiration? Burdock is edible in its many forms but tastes best in stir-fries. You can also make burdock vinegar, which is a great substitute for over-the-counter medications like Pepto Bismol when your stomach is upset. You can also make a burdock tincture to help with sore throats and other inflammatory conditions.

You can even eat the stalk of a burdock plant, although this requires a quick boil. The taste is rather bland and quite tough, but if you cook it for long enough, it can become tender enough to use in stir-fries or soups.

The flowers, too, of the burdock plant can be eaten, but it can be difficult to harvest these, since each flower is surrounded by razor-sharp thistles.

A final (and more unique!) recipe for burdock is candied burdock stems. To make this, all you need to do is cut a flower stalk when the flowers are forming. You can remove the rind and slice up the stalk before boiling the pieces in water. You then add sugar and lemon zest to make a delicious dessert – and one that has a whole host of health benefits to boot!

Annoying weed or healing herb? You be the judge. Burdock grows just about anywhere with minimal help from gardeners, and while it can easily be viewed as a nuisance, it’s time to reframe your mindset. Consider harvesting this delicious plant – we guarantee you’ll probably never run out!

Whether you decide to consume this root or to pass it up in favor of another (perhaps less shiny) herb, know that there is no danger associated with eating any part of this plant. While overconsumption should be avoided that’s true of any herb, and of course, you should always consult your medical professional before trying it.

Other than that, if you’re ready to try this healing herb, get your spade ready – you have some digging to do!

This is not medical advice. The author, website owner, website and/or the company behind it shall not be held liable for any side effects, injury or death as a result of applying the advice in this article.

3 thoughts on “Is Burdock Edible?”