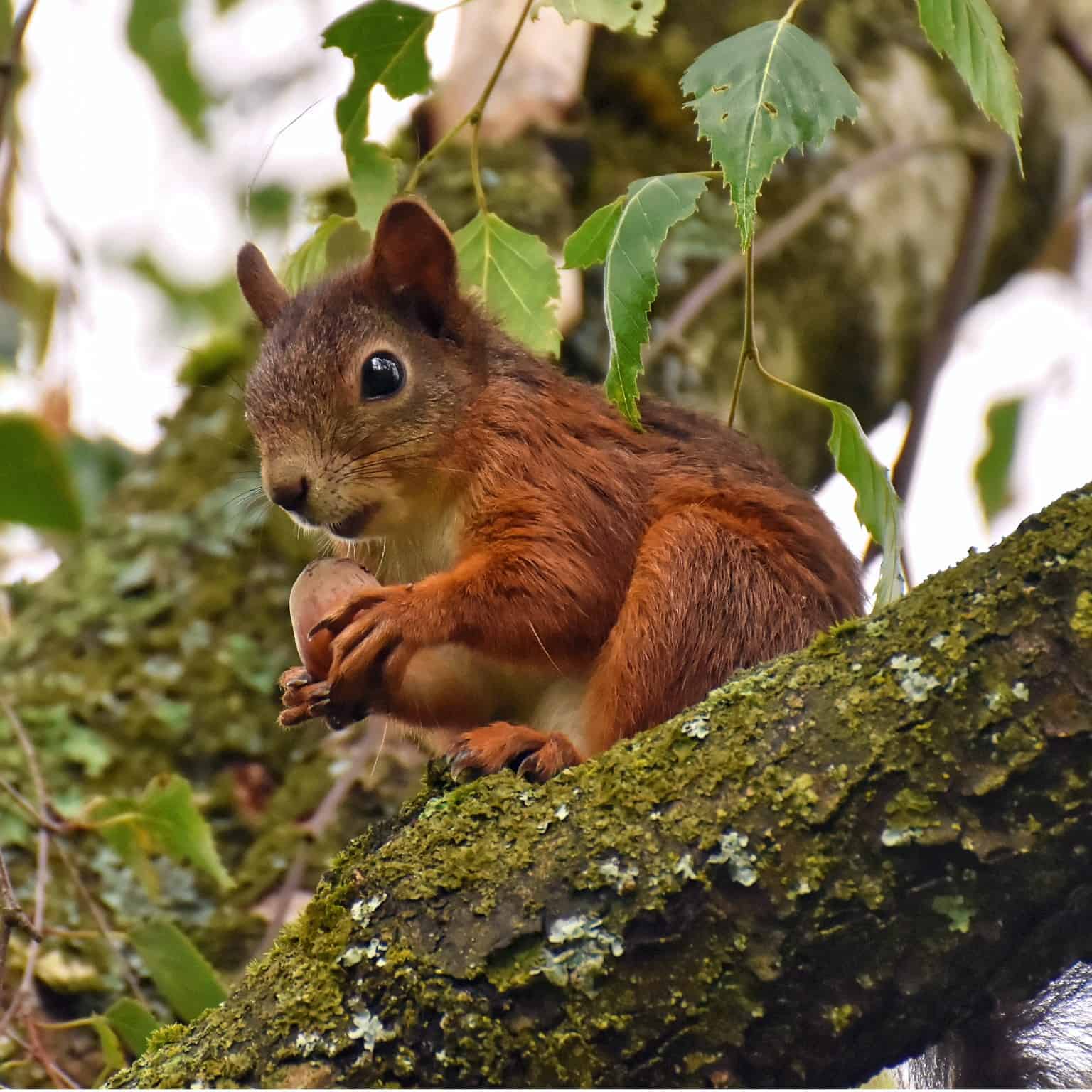 Depending on where you live and what you do, squirrels are either a quaint and cute instance of backyard wildlife or an irrepressible menace that deserves no mercy.

If you have ever had squirrels take up residence in your attic or raid your prized garden you might fall into the latter camp. Sometimes there are no two ways about it, you need squirrels gone.

But it would be better if you could get rid of them without killing them. This is where, some say, a common bar of Irish Spring comes in.

It is said that Irish Spring can actually keep squirrels away from your plants and out of your house. Is it possible? Does Irish Spring actually repel squirrels?

Yes, it can. Squirrels have very sensitive noses and the scent of Irish Spring is unpleasant to them. This can make them avoid areas where the soap is present, such as strategic locations around your property.

I know it sounds downright weird, but it is true. If you want to give it a try, just head to your local grocery store or your own bathroom if you use it and grab a couple of bars of Irish Spring.

It turns out that Irish Spring has a fairly distinguished history when it comes to using as a sort of folk remedy for aggravating animals. I’ll tell you everything else you need to know in the rest of this article.

Yes, it sure will. The fragrance of Irish Spring actually repels many mammals, including squirrels. This is a trick that has been known for a while by old-timers who live in areas with high squirrel populations.

If you have ever had the misfortune of having squirrels nibble away at the fruits and veggies in your garden, you know already that they are tough to discourage and such expert climbers that virtually nothing keeps them out for long. Irish Spring seems to keep them at a distance, at least for a while.

Now, Irish Spring is not a cure-all when it comes to keeping animals away, including squirrels. It has its own shortcomings and limitations, which we will talk about, and it does not do anything whatsoever against insects and arthropods as is sometimes reported.

But for a cheap, safe, and readily available solution, it works pretty darn well.

Why Does Irish Spring Keep Squirrels at Bay?

We know that Irish Spring does, in fact, keep squirrels at a distance. Or at least it keeps some squirrels away. But the jury is still out on exactly why this is.

The most readily understood reason is that the scent, or fragrance, of Irish Spring is simply intolerable to squirrels. They have very sensitive noses and the strong scent of Irish Spring, which is appealing to us, is just too much for them.

There are other possible explanations as well, ones that go beyond a merely disagreeable scent.

For one, some suspect that squirrels, as prey animals, are just highly wary of any significant change in their environment and in particular those near food sources.

A change might mean danger or a predator, and caution is the rule of the day when basically everything can kill and eat you.

The other explanation is that squirrels have associated the smell of soap with the presence of humans.

Whether you mean any harm or not, most animals rightly fear people, and any odor that is a tip-off to nearby humans may send even the boldest squirrel scurrying for cover.

Whatever the reason, we know for sure that Irish Spring does repel some squirrels and drives them away from areas where it is used. It is an effective tool to have in your arsenal against these furry little pests.

Will Irish Spring Harm Squirrels in Any Way?

No. The fragrance of Irish Spring is not harmful to squirrels. They aren’t getting a whiff of harmful vapors or anything like that. They simply don’t like the smell, so they stay away.

Will Irish Spring Harm Squirrels if they Eat it?

Possibly. It seems unthinkable that any animal would willfully eat something as gross tasting as soap, but you have to remember that we are dealing with squirrels here, rodents. Rodents might eat or at least chew all kinds of things, and not for reasons of nutrition necessarily.

So why would a squirrel try to eat a bar of Irish Spring? Mostly, they would do it out of instinct: the incisors of all rodents (including squirrels) grow continuously throughout their life.

If they don’t gnaw on things their teeth will grow too long and eventually impede their ability to eat. This is why squirrels as well as other rodents will chew on all kinds of things, possibly including soap.

Another thing: The squirrel’s sense of smell is very refined, and it might be smelling some ingredient in the soap that it identifies as food, or at least edible.

Sounds crazy, sure, but rodents will eat all kinds of things, including rubber and wiring insulation so soap is not out of the question.

Hopefully, the squirrel would quickly quit the idea up after tasting the soap, but it’s not impossible that it would eat a quantity of it.

What happens then? Theoretically, if a squirrel ate enough Irish Spring soap it could conceivably die.

Ingesting soap can cause all kinds of problems in animals, including dehydration, electrolyte imbalance, and intestinal blockage.

But we have no reports (at least none that I could find) of any animal actually dying from eating Irish Spring.

How to Use Irish Spring to Repel Squirrels

So, we know that Irish Spring works to repel squirrels. So what do we do with it, how do we use it? This is simplicity in itself.

If you want to keep squirrels away from a particular area, like your bird feeder or a specific plant, just put a bar of Irish Spring soap near it. Place it close enough so that the squirrel can smell it when it approaches the feeder.

You can also hang it from a mesh sack or other cloth bag to better position it.

That way works well enough, but you will get the best results by maximizing the scent produced by the soap, and to do that you’ll need to cut the soap into small cubes or even grate or whittle it into flakes.

Then you can spread it around the area you want to protect, using as much or as little as you need. You can also put the small pieces into a bag the same as a whole bar for even better results.

Now, the most important thing to keep in mind about all of this is that the soap only works as long as the fragrance lasts.

There isn’t anything in the soap that will last indefinitely and continue to repel squirrels. Once the fragrance wears off the soap is useless for this purpose.

So, you’ll need to replenish the soap periodically, especially if you live in an area with a lot of rain or your soap is exposed to direct sunlight. For best results, put out fresh soap every week or two.

Squirrels May Climb Over Your Perimeter

Lastly, don’t think for a second that just because you put out your Irish Spring that squirrels cannot get on your property or to your plants. Not quite.

These tree rats are excellent climbers and can scale almost any vertical surface, regularly jumping from branch to branch and path to path with masterful ease.

If they want to get on your property or around your soapy perimeter they will find a way, so don’t think that putting out soap is a foolproof solution to all of your squirrel problems.

It is a good addition to your arsenal in the fight against these pesky little creatures, but you will need to remain diligent to protect your plants.

"Hi! I'm Kendra. I'm a wife, mother, and homesteader. I love everything that has to do with simple living. I'm a canning instructor, an avid gardener, and a constant learner of old-fashioned skills. Here is where I share it all. Welcome to the adventure!"
Bantam Chickens: Everything You Need to Know
Do Emus Lay Eggs? If so, How Many?
Watch Out for These Homesteading Accidents (Plus the Homesteader's DIY First Aid Kit)
Are Bison Dangerous? What to do if You Are Attacked
How I Feed The Pig