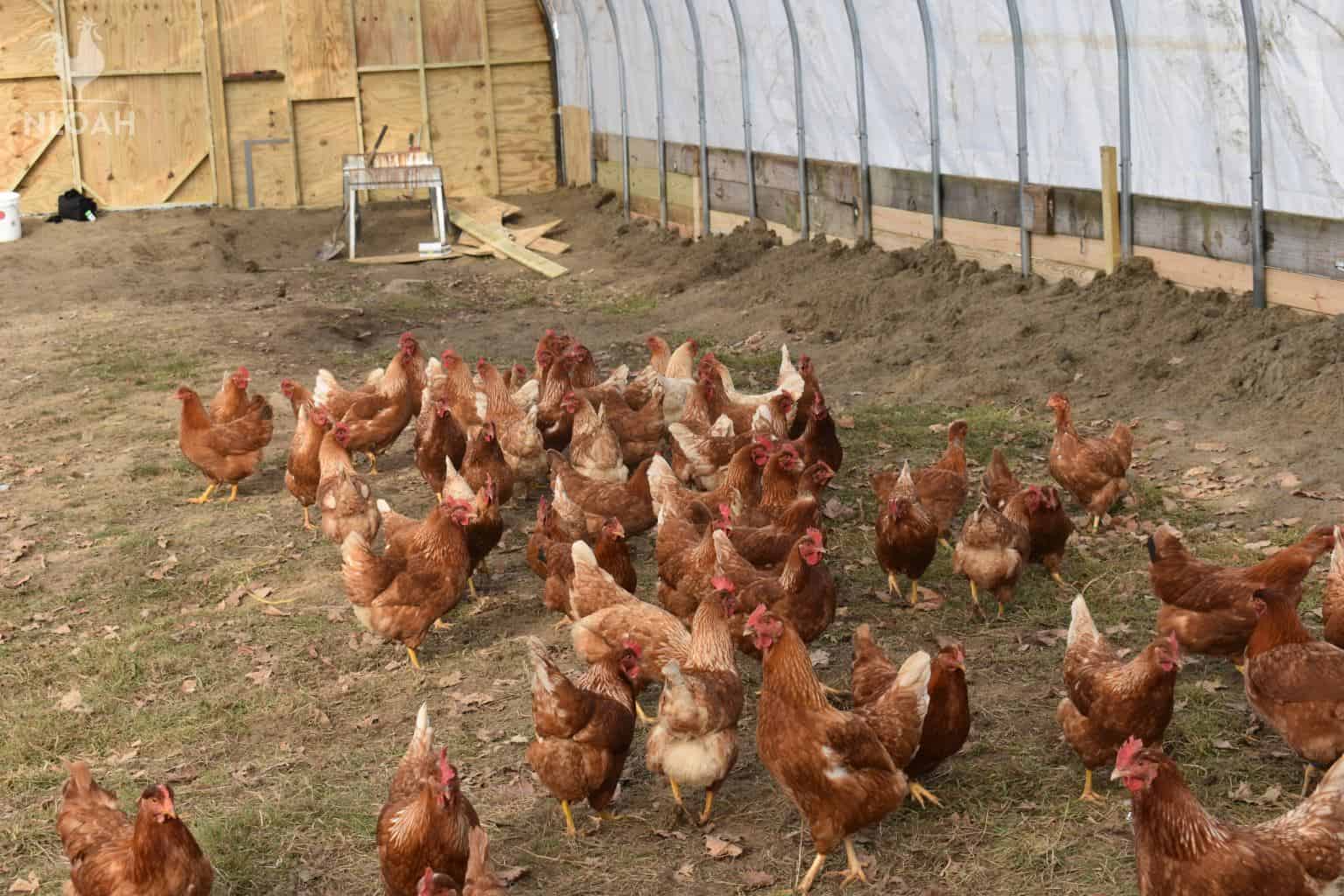 Chickens are domestic birds that rarely get the attention they deserve compared to their more glamorous, wild counterparts.

But chickens are actually pretty interesting creatures! Chickens don’t just sit around laying eggs or crowing all day; these varied, beautiful “yard birds” have plenty of personality and there is a lot to learn about them.

If you have chickens of your own you already know they are full of surprises, but there are definitely a few things you don’t know.

In this article we are bringing you a list of 9 interesting chicken facts that are sure to intrigue you.

Though they spend most of their time on land, chickens are actually fairly proficient swimmers.

Their buoyant feathers help them to float, and they use their legs to paddle through the water like a duck, though the lack of webbing means they aren’t as fast.

Most chickens usually only take to the water by accident or when they’re trying to escape from something – usually a predator.

However, some have been known to go for a swim just for fun. Chickens typically avoid deep water as their feathers can become waterlogged and make it difficult for them to get back to shore.

But if they find themselves in over their heads, they’ll start paddling and flapping their wings in an effort to make it back to dry land.

Now, just because they can swim does not mean they want to; most chickens would prefer to stay on solid ground.

Chickens generally don’t like being on the water and will try to hop out before they get soggy. That being said, these birds are individuals, and some show enthusiasm for taking a dip.

So the next time you see a chicken heading toward the pond or pool, don’t be surprised if it goes for a quick swim.

2. Chickens May go out in the Rain

This is because they are naturally quite waterproof, at least in a gentle rain. Chickens have feathers that are designed to keep them warm and dry, even in wet weather.

The feathers lay flat against their body, which keeps moisture from seeping through, and the waterproof oils produced by a chicken’s preen gland help to repel water.

Of course, chickens don’t like being soaked any more than we do. They will usually seek shelter during a downpour and will only venture back out when the rain has slowed to a light shower.

But don’t be surprised if you notice your flock coming and going as usual the next time a shower is rolling through.

3. Chickens usually Turn In around Sunset

Chickens, contrary to internet speculation and folklore, don’t have a bedtime that is associated with cycles of the moon, the weather, or any other esoteric conventions. Instead, they go to bed when you’d expect them to: when it gets dark!

Chickens don’t like to be out after sundown. This is because they are prey animals and are vulnerable to predators in the dark.

Chickens will usually head into their coop or roosting area as soon as the sun starts to set, and they’ll perch on a high spot until morning.

You’ll notice chickens start to feel insecure when they can’t see what’s going on in the environment around them, and they like to be off the ground when it is dark.

During this time, they will often doze or sleep and will wake up around sunup to start the process over again.

They are not affected by daylight savings time or any other arbitrary human conventions; if the sun is up, your chickens will be up and active, and vice versa.

4. A Chicken can Remember around 100 Faces

Chickens are often thought of as simple or even stupid creatures, but the truth is that they are quite intelligent.

More than you might think! Studies have shown that chickens are capable of remembering up to 100 distinct faces, both human and animal!

They can distinguish between members of their own flock and chickens that are new or unknown to them.

They also remember humans for good or ill; you already know that your chickens recognize you and are happy to see you, whereas they might be standoffish to strangers or people who hurt them.

This ability to remember faces is likely an evolutionary adaptation that helps chickens to avoid predators and identify potential mates.

Their intelligence extends beyond recognition, too: Chickens also have a surprisingly good sense of direction.

They can find their way home from up to a mile away, using a variety of cues such as the position of the sun and the landscape surrounding their coop.

So the next time you see a chicken scratching around in the dirt, take a moment to appreciate the intellect behind the beak!

5. Chickens are the Most Plentiful Bird in the World

Chickens are the most populous bird in the world by a huge margin! As of 2022, there were an estimated 25 billion chickens on the planet.

That’s more than three times the population of humans! It’s a good thing they don’t have thumbs or we would likely be extinct by now. Chickens are found all over the Earth, everywhere except Antarctica.

How did the globe wind up with so many chickens!? It is because chickens play an important role in so many civilizations around the world.

In addition to being a source of food, they are also used for their feathers, which are used to make a variety of products, including clothing and insulation.

Chickens are also popular pets, and they have even been known to form close bonds with humans. They are even revered and respected in some cultures.

Considering that chickens have been domesticated for at least 8,000 years, and likely much longer, this supports their widespread prevalence.

It’s no wonder that chickens claim the title of “the world’s most common bird.”

6. A Laying Hen needs 4 Pounds of Feed to lay a Dozen Eggs

Everyone knows that a healthy chicken will lay lots of eggs. Like, a lot of eggs, but did you ever stop to wonder how much food a chicken needs to produce the carton of eggs that other people buy at the grocery store? Turns out, we have an answer for that.

According to the National Chicken Council, a laying hen needs around four pounds of feed in order to lay a dozen eggs. That’s not too bad when you think about it.

In fact, the return on investment (at least, for us humans) is quite good! A dozen eggs can cost anywhere from $0.30 to $0.70 a piece, depending on where you live, the type of egg, and what time of year it is.

An average, laying hen will eat around $0.15 of feed a day, or around $0.60 cents a day if you feed them the primo organic stuff.

Of course, this doesn’t take into account the other costs associated with keeping chickens, such as housing, medical care, and water, but even so, it is an affordable and sustainable way to get premium, fresh eggs daily!

Getting into the gross territory, but you have to know about this stuff if you are going to raise your own flock, you know! Chickens, as it turns out, don’t pee.

Or at least, they don’t pee in the way that mammals do. This is because chickens lack a bladder.

Instead, they excrete nitrogenous wastes in the form of uric acid, which is a white, semisolid substance.

This uric acid is then voided through the body along with solid waste, i.e. chicken poop. Sometimes you can actually see these crystals on the surface of the pellets your chickens leave behind.

On that note, you should know that chickens don’t have much control over when they poop; it just kind of happens whenever their digestive system feels the need to move things along.

So if it seems like they just poop as they go with no rhyme or reason, that’s because they are.

Hey, we already broke the ice about chickens peeing, so there is no need to stop there.

One of the great mysteries (and arguments) in chicken enthusiast groups around the country is whether or not chickens actually fart. Well, do they?

Yes, yes they do. Chickens, like all animals with digestive systems, produce methane gas as a byproduct of their digestion. This methane is then released through what we would call “flatus” or … a fart.

Now, the jury is still out on whether you can hear it or not; most seem to think that chickens are exclusively the “silent but deadly” type of wind-breakers, while others swear on everything that they have indeed heard their chickens fart.

The search for knowledge continues, but one thing is certain: you can smell it! In fact, some chickens seem to pass hideous gas when on certain diets, and you’ll know because their coop will take on a nasty reek!

9. Chickens have their Own Daily Agenda

Most people who are unfamiliar with chickens seem to think they are simple critters, waking up to eat and then lay eggs (or cock-a-doodle-doo) all day.

But this isn’t true. Chickens are creatures with sophisticated habits and follow a pretty regimented daily routine.

They typically wake up at sunrise and spend the day pecking around for food, taking dust baths, sunbathing, and socializing.

Yes, chickens like to socialize. They have friends (and enemies), like to play, interact with caretakers, and more. You might say that chicken “society” is pretty hierarchical, with a clear pecking order that must be followed.

Chickens are also very active during the day and can walk up to three miles just looking for something good to eat! This is one of the reasons why it is so important to have plenty of space for your chickens to roam; they are active and need room to explore and forage.

1 thought on “9 Interesting Facts about Chickens”