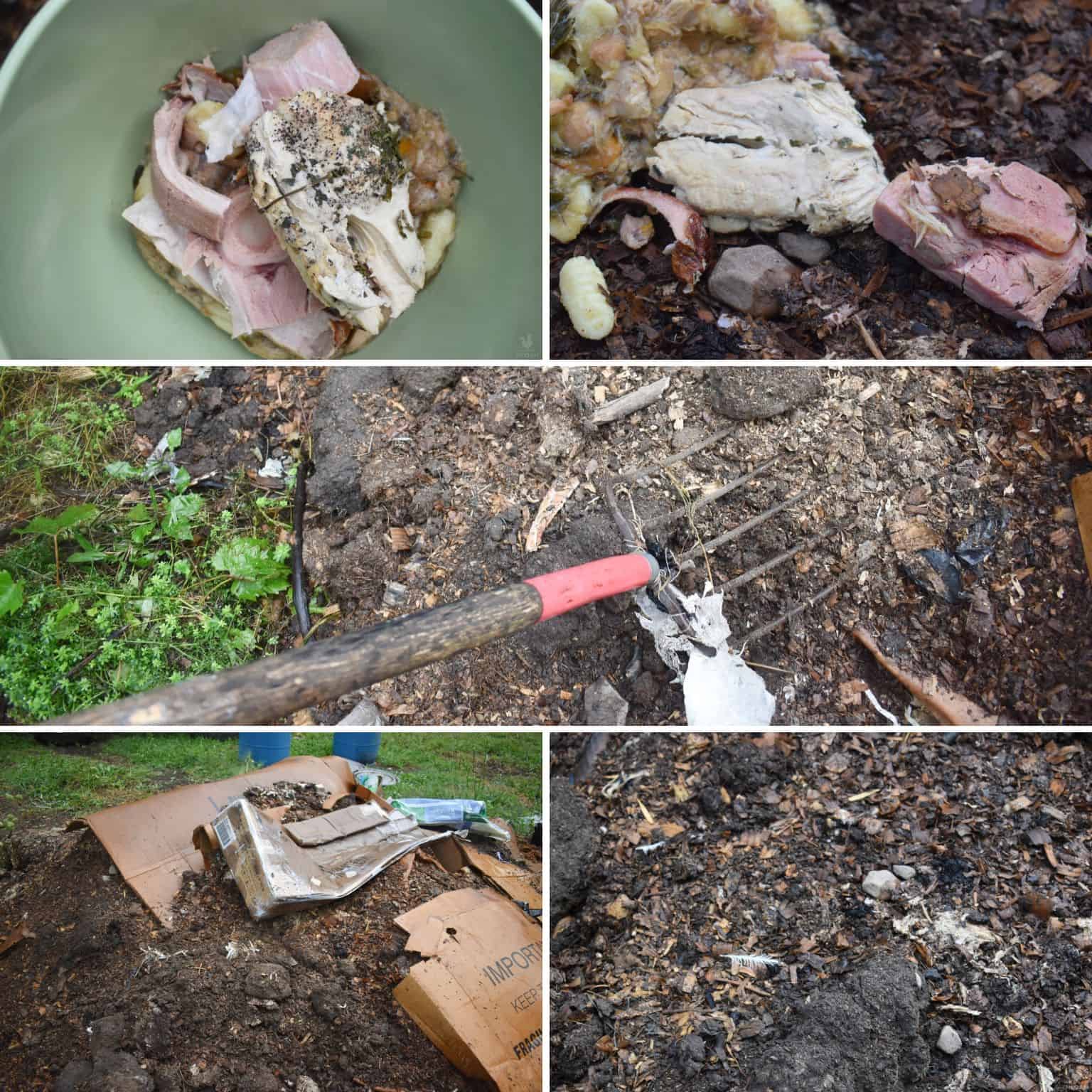 If you’re like most people, you probably don’t give much thought to what happens to your leftover meat scraps.

But if you’re composting, it’s important to know that meat can’t just go in with the rest of the compost. At least, not without paying attention to some general tips for doing it safely and correctly.

You see, meat doesn’t break down quite as easily or as quickly as other types of food, like vegetables and coffee grounds.

Therefore, you’ll need to take a few extra steps to make sure your scraps are breaking down the way they should.

Here’s how to compost meat scraps safely and effectively.

Can Meat Scraps Be Composted?

For gardeners and environmentalists, composting is a great way to reduce waste and create a nutrient-rich soil amendment for their plants.

But not all organic matter is created equal, and there are some items that should be avoided when composting.

Meat scraps, for example, can attract vermin and cause offensive odors. In addition, meat contains high levels of nitrogen, which can throw off the balance of a compost pile.

If you do choose to compost meat scraps, it’s important to take precautions to prevent pests and keep odors under control.

The best way to do this is to bury the meat scraps in the center of the pile, where they will be less likely to attract attention.

You should also mix in other types of organic matter, such as leaves and garden waste, to help offset the high nitrogen content.

By following the simple guidelines in this post, you can compost meat scraps safely and effectively.

How to Compost Meat Scraps

You might think that meat scraps are too dirty or smelly to compost, but if you follow a few simple guidelines, they can make great fertilizer for your garden.

Start With a Large Pile

First of all, it’s important to start with a large pile. A pile that is at least 3x3x3 will generate enough heat to kill harmful bacteria.

In the picture above, you can see that we have some other materials we’re adding to the compost pile at the same time as the meat, like cardboard.

Chop or shred the meat into small pieces before adding it to the bin. This will help it to break down more quickly and will also reduce the risk of attracting vertebrate pests.

In the pictures I’ve included in this post, you’ll see that the meat as well as some other ingredients like the cardboard are not chopped or shredded. Doesn’t this go against conventional wisdom?

It does. However, our compost pile is quite massive. Being a working farm with a large amount of compostable waste, we have a pile that vastly exceeds the size recommendations listed above.

Everything breaks down so quickly (the compost pile will put out massive plumes of steam, even during the coldest days of winter) that we don’t have to worry about chopping or shredding.

For household compost, though, definitely make sure you chop or shred.

You may want to make sure that your compost bin is securely covered. This will help to deter animals from getting into the bin and will also help to prevent any odors from escaping.

Add some carbon-rich materials such as leaves or straw to the bin when adding meat scraps. This will help to balance out the high nitrogen content of the meat and will also absorb any odors.

The key is to keep the scraps well-covered and to bury them deep in the compost pile so that animals can’t get to them.

You can also add a layer of dry leaves or straw on top of the meat scraps to help absorb any odors.

Put Them in the Center

One simple way to compost meat scraps safely is to put them in the center of the compost pile. This helps to contain the odor and keep scavengers away.

Only Do This With Hot Composting Methods

If you’re going to compost meat scraps, it’s important to only do so with hot composting methods.

Hot composting is a process that reaches temperatures of 130 to 150 degrees Fahrenheit, which is high enough to kill harmful bacteria. This is in contrast to cold composting, which doesn’t reach these temperatures.

Make Sure the Pile is in Full Sun

The pile should be in full sun, since the heat will help to speed up the decomposition process.

Stir and Turn the Pile Regularly

Make sure to turn the pile regularly, as this will help to aerate the meat and hasten its decomposition.

While there are many different composting methods, one option that may be especially well-suited for meat scraps is a specialized countertop composting system.

Lomi is one example of such a system. It uses electric power to grind and mix food waste, resulting in a finished compost product in as little as 24 hours.

Because Lomi grinds the food waste into small pieces, it is less likely to attract pests and animals than other composting methods. In addition, the enclosed nature of the system helps to minimize odors.

Bokashi composting is a type of fermentation that breaks down meat quickly and effectively. And compost digesters are devices that use enzymes to break down organic matter.

Both of these methods are great for composting meat scraps. And they’re both relatively easy to set up and use.

Consider the Location to Avoid Attracting Pests – and to Avoid Smells

Meat can be a great addition to your compost pile, but it’s important to take some precautions to avoid attracting pests and creating unpleasant smells.

First, consider the location of your compost pile. If you live in an area with a lot of wildlife, it’s best to keep the compost pile enclosed so that animals can’t get to it.

Second, make sure to chop up the meat into small pieces before adding it to the compost so that it will decompose more quickly.

Finally, add plenty of other organic matter to the compost pile, such as leaves and grass clippings, to help absorb any odors.

When you spread the finished compost on your garden beds, be sure to do so in a thin layer. This will help to prevent the spread of bacteria while still providing nutrients for your plants.

You may want to test the compost for bacteria prior to using it in your garden – or to play it super safe, only use the compost on plants you don’t intend to eat, like flowers.

What About Composting Other Animal Products?

Composting is a great way to reduce waste and add nutrients to your garden soil, but not all materials are suitable for composting.

Animal products like meat, dairy, and eggs can attract pests, produce strong odors, and take a long time to break down.

Bones are also not good for compost, as they are too dense and will not decompose properly.

So what can you do with these items? One option is to bury them in your garden, away from any plants. This will help to keep pests away and allow the natural process of decomposition to occur.

Another option is to find a local composting facility that accepts these types of materials. By composting responsibly, you can help to reduce your impact on the environment and promote healthy plant growth.

So what are the pros and cons of composting meat scraps?

On the plus side, meat scraps are a great source of nitrogen, which is essential for plant growth. They also break down quickly, so you won’t have to wait long to add them to your garden.

Composting is a process that breaks down organic matter, such as food scraps and yard waste, into a rich soil amendment.

Unlike other methods of disposal, such as landfills or incineration, composting doesn’t create pollution or release greenhouse gasses. It also gets rid of food scraps without taking up extra space in landfills.

On the downside, however, meat scraps can attract rats and other animals. If not managed properly, flies and rodents can become a problem.

They can also create an unpleasant smell if not managed properly.

One more concern is that bacteria from the meat can contaminate other food scraps in the compost pile and cause illness.

So what’s the verdict?

Composting meat scraps can be a great way to improve your garden, but it’s important to be aware of the potential drawbacks. Weigh the pros and cons carefully before deciding whether or not to add meat scraps to your compost pile.

If you’re looking for an easy way to start composting meat scraps, these tips will help get you started. Remember, the key is to keep your pile moist and aerated.

Add a layer of brown material like leaves or straw to help with moisture and air circulation.

And finally, have patience – it may take a few months for your pile to break down completely. Once it does, you can use the compost in your garden or yard to improve soil health and fertility.

Have you tried composting meat scraps? What tips would you add?

Why should you not compost meat?

When meat decomposes, it releases harmful bacteria into the soil. This bacteria can then be absorbed by plants, contaminating them and making them unsafe to eat.

In addition, meat-based compost can attract animals, such as rats and raccoons, which can spread diseases.

What can I do with raw meat scraps?

Besides composting, one other option is to grind them up and use them as hamburger meat. Just add some seasoning and breadcrumbs, and you’ve got yourself some delicious burgers.

Or, if you’re feeling adventurous, you could use the scraps to make your own sausage. Just mix the meat with some spices and stuff it into casings.

Who knows, maybe you’ll come up with the next best thing since Spam!

Can cooked meat be composted?

While some people may be hesitant to add cooked meat to their compost pile, there are a number of good reasons to do so.

First of all, cooked meat is a great source of nitrogen. This is an essential nutrient for plants, and it can help to accelerate the composting process.

Additionally, cooked meat is less likely to attract animals than raw meat. This can help to keep your compost pile safe from unwanted critters.

Again, you’ll want to follow the same tips for composting meat as described above, since cooked meat can still pose many of the other same concerns.

Can you compost chicken?

Chicken is a particularly good choice for composting because it breaks down relatively quickly and contains a lot of nutrients that can benefit plants. That said, you’ll want to still make sure you’re following the advice from above.

It turns out that compost worms will happily eat meat, but it’s not recommended to put meat in a compost bin for a few reasons.

First, the meat will start to rot and smell bad, attracting flies and other pests.

Second, the rotting meat can create an imbalance in the compost bin, making it difficult for the worms to break down other materials.