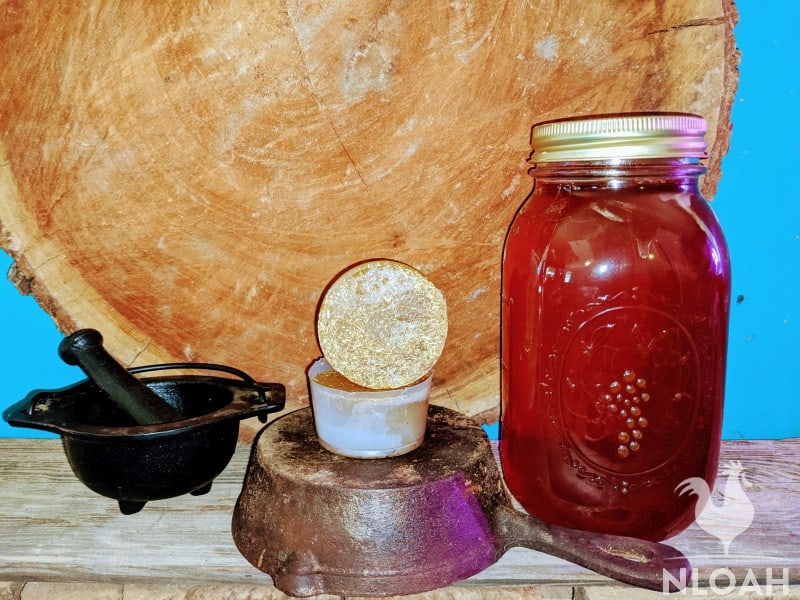 Honey and chamomile are two of the most popular additives to natural soap bars. Combining the two is to make, and the melt and pour soap base creates both a pleasing scent and feel when used.

The use of honey in soaps infuses it with humectant compounds that help combat and prevent acne, as well as smooth and moisturize the skin.

Honey’s antioxidant and antimicrobial properties may offer enhanced healing to any minor wounds or insect bites on the hands and body.

The honey used in soap also commonly increases the lather of the bar, making a nice amount of sudsy bubbles when used, as well.

Chamomile also produces a soothing response on the skin.

Use raw honey when adding it to a soap base.

Processed honey or something else purchased from a grocery store without fully reading the label that is only “kind of” honey will not work as well, or possibly not provide the anticipated possible soothing effect.

If you do not grow chamomile or have herb flowers on hand that you can dry, sachets of chamomile tea will work just fine.

Can Honey Be Added to Melt and Pour Soap Bases?

The short answer is a resounding “yes.” But, melt and pour soap bases, whether they are of a glycerin, goat’s milk, oatmeal, or shea butter variety, can tend to become too soft and create “glycerin dew” if large amounts of honey are added.

As long as you do not add in more than up to 1 teaspoon of honey per pound of melt and pour soap base, the bar should turn out just fine. This same rule applies anytime you add any variety of oil or butter into a melt and pour recipe.

Remember, you can always learn from a recipe and add in more honey next time, but once you have stirred in too big of a dollop, there is not sifting it back out.

How Well Does a Honey Based Soap Lather?

If you use 1 teaspoon of honey per pound of soap base (especially with a glycerin soap base) the bar should create an extremely creamy and dense lather.

It is the additional honey in the recipe that weighs down the soap bubbles, and makes the lather feel and look more creamy.

When less honey is used, less than half a teaspoon for example, the soap will be a lighter shade and should produce a lather that is more “fluffy” – which definitely still has a pleasing effect on the skin. 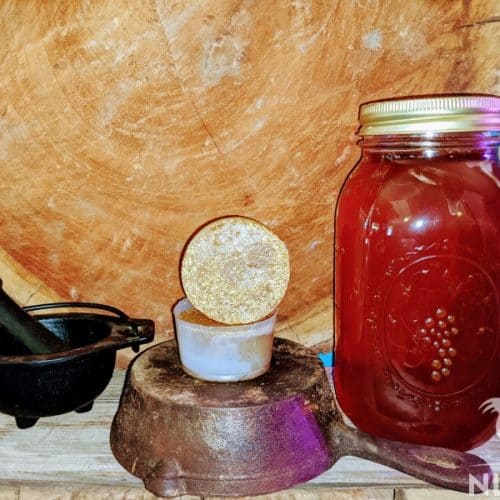 Once this portion of the melt and pour soap bar has hardened, you can mix the honey in with more chunks of the MP soap base and pour it directly on top of the portion containing the chamomile.

Then, follow the rest of the curing and removal steps outlined above to complete the honey and chamomile soap making process.

When made and stored correctly in a cool dry place, the honey and chamomile soap should retain its color, scent, and solid texture for about 12 months.

"Hi! I'm Kendra. I'm a wife, mother, and homesteader. I love everything that has to do with simple living. I'm a canning instructor, an avid gardener, and a constant learner of old-fashioned skills. Here is where I share it all. Welcome to the adventure!"
5 DIY Natural Mold Cleaner Recipes That Work
How to Easily Clean a Cast Iron Skillet
DIY Baking Soda Carpet Freshener
DIY Glass and Window Cleaner
DIY Natural Disinfectant Wipes