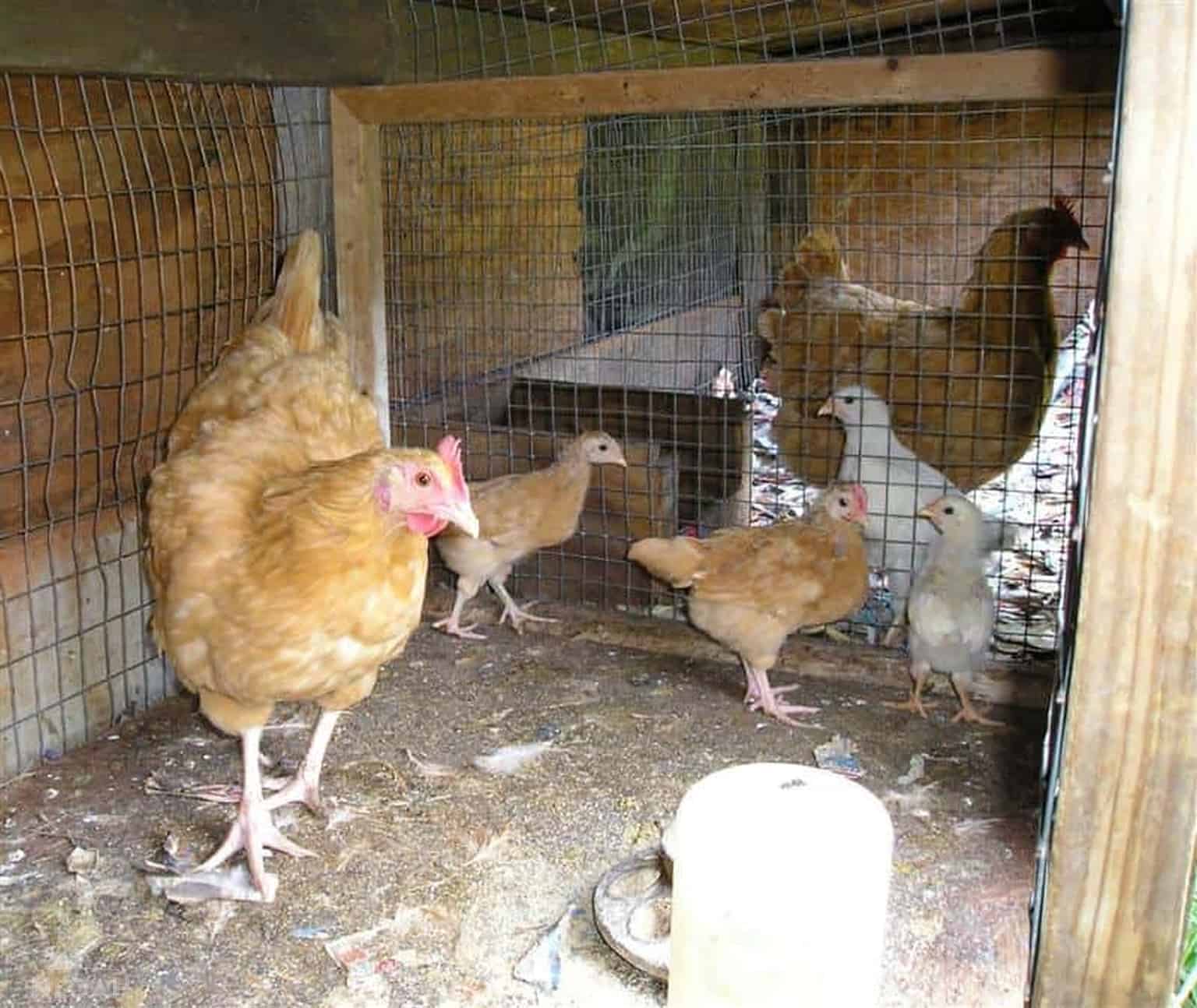 It’s happening! The chicks are hatching!! Sunday night we went out to check on everybody one last time, and Jerry heard the sound of a chick peeping coming from under mama hen.

The next morning we went out to see, and sure enough a fuzzy, yellow little chick peaked out from under the hen’s wing.

I was worried that they were still in the chicken coop with all the other chickens. We really should have moved her and the nest before they started hatching.

A broody hen needs to be separated from the rest of the flock so that she can have her own food and water supply, and to protect her new chicks from becoming victims of deadly bullying from the other hens.

I’d waited too long to move her, afraid that she might refuse to finish the job once in an unfamiliar place. But now that they were hatching, I was really afraid to move her.

We decided to clean out our largest rabbit cage, make a nesting box in there for her with fresh grass clippings, and move her and the nest to the safer brooder.

Carefully, we got everything situated. And thankfully, although annoyed, she fluffed herself up and went right back to sitting on the clutch of warm eggs. The little chick buried itself once more into her warmth.

I really, really wanted to let her free range with the chicks, so that she could teach them to scratch and find food. But I just couldn’t find a way to do this safely. We don’t have the materials to make a chicken tractor (a moveable coop), which would have been the perfect solution.

I’ve been doing some reading on what to expect now.

The hen will keep the chicks warm, so no need for a heat lamp. The chicks will be nourished for three days by the yolk sack they’d absorbed, and then they will need food.

I’ll have to buy a bag of chick starter feed. I plan on getting the unmedicated kind, and letting the mama hen eat that as well since it’d be hard to have them eat different things separately.

I think after three days the hen will leave the nest and take the hatched chicks to look for food. She’ll cluck to show them where it is, and teach them how to peck and drink.

Since the other hens were laying in the same nest with the broody hen for several days, there are sure to be eggs still waiting to hatch when this hen leaves the nest. If they don’t get continuous warmth, they’ll die.

Fortunately, two more of our hens have gone broody! (I’ve been stealing their eggs though, so they aren’t sitting on any.) I expect to have to put another broody hen on the abandoned nest to finish hatching. *Hopefully* this will work. It’s the plan, anyways.

From what I understand, the hen will teach and care for her chicks for six weeks, and then she’ll be ready to return to the flock.

The chicks, however, will need to stay separated until they are almost full grown. Otherwise, the older hens will peck them and might even kill them.

If you remember, she was sitting on 17 eggs. I shouldn’t have let her accumulate that many. A dozen probably would have been a much better number. We’ll see, though. I’m crossing my fingers that she has a good hatch rate.

Only one has hatched since Sunday evening (two days) though… I’m really hoping the others start hatching soon. Like as in tomorrow!!

The kids and I have enjoyed watching the little chick exploring its new world. The poor mama hen probably didn’t find it as humorous as we did when the chick kept pecking her in the eye though. Ouch!

It’ll be fun watching nature take its course. This is definitely much easier than incubating them ourselves!

I’d love to know what your experience has been hatching naturally!