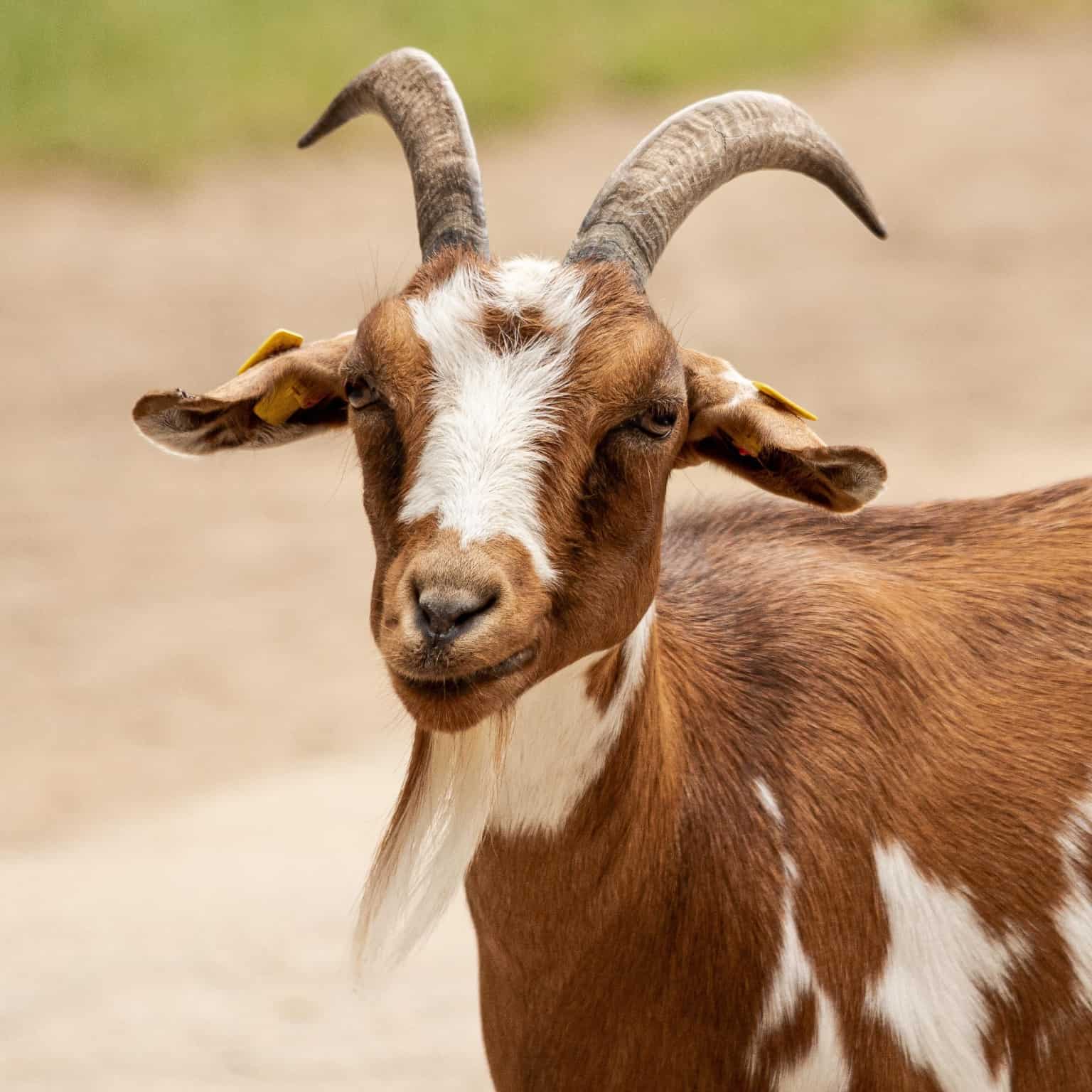 It is one of the most dreaded things that every goat owner fears: bloat. Bloat is a dangerous condition that can affect goats of all ages where the rumen becomes bloated with trapped gas from the digestion of food.

This can happen for a variety of reasons, but in most cases, if the affected goat is unable to expel the trapped gas it will eventually die painfully from asphyxiation.

Bloat is a deadly serious condition, one that can strike with very little warning. If you want to save your goat you’ll need to act fast and know what to do.

In this article, we’ll cover what bloat is, the difference between common kinds of bloat, and ways to deal with it before your goat gives up the ghost.

We’ll also discuss how to prevent bloat so you hopefully won’t need this info ever again. Roll up your sleeves and let’s get to it.

Bloat, known more properly as ruminal tympani, is a condition that affects goats and other ruminant animals. It happens when the animal’s rumen, the largest of the four stomach chambers, becomes bloated with gas generated by the fermentation and digestion of food.

Normally released by belching, when the gas is trapped it can cause the rumen to expand and twist, painfully putting pressure on the diaphragm and making it difficult or impossible for the goat to breathe.

If left untreated, bloat will eventually kill the goat through asphyxiation or the rupturing of the rumen. In all cases, it is agonizing for the affected animal.

Symptoms of bloat include an enlarged, taut abdomen (especially firm near the spine), a lack of appetite, anxiety, restlessness, kicking at the belly, and eventually recumbency (lying down and being unable to stand up again).

If you see these symptoms in your goat it is important to act quickly as time is of the essence.

The Different Types and Causes of Bloat in Goats

There are three main types of bloat:

Each type has its own set of causes, but may require different treatments.

Frothy bloat is the most common type of bloat and is caused by the ingestion of too much lush, green pasture, or legume foliage like alfalfa. These plants are high in protein which is broken down into amino acids during digestion.

One of these amino acids, lysine, is converted into gas which builds up and causes the rumen to expand.

There is some evidence that frothy bloat can also be caused by drinking milk from goats that have been recently injected with hormones like estrogen or oxytocin.

Free-gas bloat is less common but just as deadly as frothy bloat. It happens when there is an accumulation of gas in the intestine that isn’t expelled through belching or flatulence.

This can be caused by a blockage in the intestine, a sudden change in diet, drinking dirty water, or eating too much grain.

Abomasal bloat only affects kids and is caused by an accumulation of gas in the abomasum, the fourth stomach chamber which isn’t fully developed in young goats.

This is often caused by an overgrowth of bacteria, and is commonly associated with feeding kids milk replacement instead of their mother’s milk. It can also sometimes be caused by parasites like coccidia or worms.

Now that you know what kinds of bloat can affect your goats, time to learn how to deal with it.

The following methods are all viable treatments for bloat that you can administer yourself.

All can release the gas, providing goats fast relief and curing them of the issue. This is serious business: left untreated, bloat can easily kill a goat.

However, as always it is a good idea to call your vet at once if you suspect you are in over your head or if your intervention is unsuccessful.

A vet might be forced to make an incision directly in the rumen to vent the gasses in a hurry if other methods prove unsuccessful. Not something for the faint-hearted!

For free-gas bloat that is not too severe (yet) simply massaging the upper left side of the goat’s abdomen can help.

This will help to move the gas around and break up any pockets or blockages, allowing it to be expelled via normal belching.

Be gentle, as a severe case might be aggravated even by a gentle touch, but assuming your goat can still stand you should not worry too much.

This technique is not always successful in cases of severe free-gas bloat, and rarely helps at all with frothy bloat, but it is definitely the first thing you should try if you notice early signs of either type.

Walk it off! Another method that can help with free-gas bloat is walking the goat around. This also helps to move the gas around and break up any blockages, hopefully allowing it to be expelled.

Since goats might give up and lay down at the first sensation of discomfort, the bloat might get worse.

If the goat is too bloated or in too much pain to walk skip this method entirely and move on to more serious measures.

The stomach tube, literally insertion of a tube through the goat’s mouth and into the first chamber of the stomach, is your secret weapon for curing free-gas bloat and is helpful in curing frothy bloat.

Since it is so useful and versatile you will definitely want to learn how to handle one. These implements are freely available online, from vet supply stores, and at some well-equipped farm and livestock suppliers.

By inserting the tube into the trapped pocket of gas (in the case of free gas bloat) it provides an exit for it.

This releases some of the pressure on the stomach and if it does not solve the issue entirely makes it easier for the goat to burp and expel the rest of the gas.

In the case of frothy bloat, though the tube does not remove the foam which is the source of the issue it does allow the safe administration of other cures on the list. More on that in just a bit.

Now, the insertion of a stomach tube is a tricky thing. The goat is already in pain or extremely uncomfortable, and you are shoving a tube down its throat.

This is not a time for gentle coaxing, the goat must be restrained. There are various ways to do this but you will need help with this one.

This is a classic quick remedy for bloat. Simply mix 1 tablespoon of baking soda into some warm water and offer it to the goat. A large dropper or baster may be helpful.

The baking soda will help to break down the foam causing the frothy bloat and release any gasses trapped in case of free-gas bloat.

Depending on the severity of the bloat and the goat’s condition, they might be of the mind to drink or not. If they don’t, do not force the solution down their throat!

This can easily result in the aspiration of the baking soda and major problems in the aftermath.

If the goat just won’t drink, administration of the baking soda through stomach tubing is still an option as described above.

For dealing with frothy bloat, the first step is getting the stomach tube in place. The next step is to administer some mineral oil.

This will help to disrupt the foam and make it easier for the trapped gas to pass. Give 1-2 ounces of mineral oil to an adult goat.

Again, never, ever attempt to force the goat to drink the mineral oil or otherwise force it down its throat without the stomach tube in place. If the mineral oil gets into the goat’s lungs you are going to have major problems.

Poloxalene is a surfactant that can be used to “drench” frothy bloat in the same manner as baking soda or mineral oil.

Administered through the stomach tube or fed orally (before bloat gets too bad) it is highly effective, most especially if given successfully prior to symptoms progressing.

Best of all, this stuff is available without a prescription, though it is significantly more expensive than mineral oil or baking soda and water solution.

Commonly encountered as the active ingredient in over-the-counter bloat remedies, if you want a proven solution for frothy bloat this is a good one to keep handy.

How to Prevent Bloat in Goats

You know the old aphorism: an ounce of prevention is worth a pound of cure. That is double-true when it comes to bloat!

Some shepherds see bloat as a sort of mysterious blight that strikes without rhyme or reason. But in reality, it almost always occurs due to accidents, mismanagement, or lack of information.

The following procedures and tips will help you make bloat a thing of the past for your herd.

A sudden change in diet, such as introducing new feed or hay, can cause bloat.

Goats are creatures of habit and they need time to slowly adjust to new foods. Sudden changes can lead to digestive upset and bloat.

Both of these foods contain high levels of sugars which can contribute to serious frothy bloat.

This can occur from fresh, live pasturage or as hay. They should be introduced slowly, as above, and fed in strict moderation.

Letting unaccustomed goats into an area with abundant alfalfa, unbeknownst to you, can spell certain death if they eat it to their heart’s content.

A sudden influx of grain can also lead to frothy bloat. Be sure to slowly introduce grain into the diet and never let goats gorge themselves on it.

Believe it or not, consuming wet grass can also cause bloat. If the area where your goats graze is particularly wet, try to keep them off of it until it has had a chance to dry out some.

A single large meal can be hard for a goat’s stomach to digest and can contribute to bloat.

It is better to feed several smaller meals throughout the day. This will also help reduce the likelihood of grain overload.

6. Be Mindful of Chunky Foods

Firm, “chunky” produce that goats enjoy like apples, carrots, and similar items can physically block or impede gas from escaping the digestive tract. If serving these items to goats, make sure they are cut up small!

Beat Bloat and Save Your Goats

Bloat is a serious condition that can kill your goats if not treated quickly and effectively.

Prevention is the best way to avoid this from happening, but knowing what to do when bloat does occur can mean the difference between life and death for your herd.

The tips and techniques detailed here will be helpful in keeping your goats healthy and free from bloat.

"Hi! I'm Kendra. I'm a wife, mother, and homesteader. I love everything that has to do with simple living. I'm a canning instructor, an avid gardener, and a constant learner of old-fashioned skills. Here is where I share it all. Welcome to the adventure!"
So, Can Goats Eat Pine Needles?
So, Does Irish Spring Soap Repel Squirrels?
Kinder Goats - The Best Goats You've Never Heard Of
Attracting Bluebirds To Your Garden for Natural Pest Control
Bumblefoot in Chickens and Ducks - Here's How to Treat It