Getting your flock of chickens and ducks ready for winter is essential to not just their egg laying, but their overall health and protection from predators. While chickens and most poultry birds have a higher internal body temperature than humans (about 105F to 107F degrees on average, that’s around 40C – 42C) that does not mean both they, their coop, and their run does not need some extra help getting ready for the long cold months of winter.

Some meat and egg bird breeds are far more winter hardy than others. The first step in winter chicken and duck prep is to get to know your breed better.

Breeds that have difficulty in cold weather will require you keeping a far more diligent eye on their wattles, combs, and feet. A poultry bird can become severely frostbitten over the course of just a single day.

Many breeds of poultry are prone to respiratory illnesses and a weakened immune system during winter months – especially free range birds that garner the bulk of their diet by foraging for their own meals.

Add a tablespoon each of any three of the following medicinal herb and flowers on top of feed, as a free choice snack, and even in nesting boxes to entice hens to remain sitting on their eggs, during the winter months. You can mix and match the herbs and flowers and rotate what you use on a daily basis.

During the winter months is it also recommended to up the intake of the flock’s green leafy vegetables, as well as other nutrient-rich vegetables. Growing additional greens in your garden or indoors during the winter will help feed your flock healthy snacks for pennies on the dollar. You can dehydrate fresh greens to preserve them until needed to help supplement the diet of your chickens and ducks.

There is no real need to reconstitute the dehydrated veggies; the birds will like them just fine in their dried state. You can powder and sprinkle the dried veggies over the feed or serve them whole as a free choice snack. It is also a good idea to tie the ends of the vegetables together and dangle them from the top of the run as a boredom buster.

Your chicken and ducks do not need a heater inside the coop. In fact, putting one inside creates a significant fire threat. All the the straw or hay you use as bedding serves as fodder for a fire when placed anywhere beneath a heater or heat lamp – even if the device is attached to the ceiling of a tall coop.

When chickens fly around the coop, even if they are merely trying to get up only high enough to reach a nesting box, their flapping wings can get singed by a heat lamp or coop heater.
Only chicks in a brooder require a heat source during the winter months. The members of your flock posses a natural inclination to huddle together for additional warmth.

The best way to help your chickens stay warm inside the coop is with ample bedding and a tall roost. The birds will go to the top of the roost to stay warm, taking advantage of the rising hot air.

Put an extra layer (or two) of bedding on the floor of the coop and in nesting boxes. Straw or hay has insulative properties and will help keep the flock members warm – even chicks that are nestle beneath their protective momma hens.

If you live in an area with exceptionally harsh winters or are keeping chicken and duck breeds that are not prone to being cold weather hardy, consider investing in some quality insulation for the coop.

You can attach rolled insulation sheets to the interior of the coop wall and then cover over it with treated plywood (or particle board, but it will not last as long) to ensure the birds do not try to peck at the insulation and ingest it.

Make sure you do not add too much insulation and hamper the ventilation of the coop. If a chicken coop does not have proper insulation, moisture build up can lead to the creation of deadly levels of ammonia.

Ventilation is good – drafts are bad. All ventilation areas should be on the upper wall of roof are and above any roost inside the coop. Spend a few minutes inside the coop on a chilly and/or windy day and take notice of any drafts that exist around doors or flaps and take steps to remove the problem areas.

Also, remember to remove hay on a regular basis to avoid it becoming moist and prompting the growth of old that can cause respiratory illnesses to develop in the flock. I recommend wearing a mask when using a pitchfork or shovel to remove soiled straw or hay to avoid the chance of inhaling mold spores on a regular basis.

Extended exposure to mold spores inside chicken coops and pens can lead to chronic and/or serious medical issues. Because the chickens and ducks will spend more time in the coop to stay out of the cold, expect to change bedding far more often during the winter months.

An entertained flock is a happy and healthy flock. Healthy, because they are remaining active and not pecking each other and creating wounds that can become infected.

1. Soak the alfalfa cubes in water until they are rehydrated and can be pulled apart. Allow the alfalfa to dry to a moist or fairly dry state, but do not use it in the recipe wet.

3. Mix all of the ingredients together and hand form into a shape or use a baking mold to create a shape that can be placed or hung inside the coop.

4. Bake for 45 to 60 minutes depending upon how many molds are placed in the oven and once and the dimensions of the molds used. If making trays of cookie cutter or cupcake pan treats, it should only take about 45 minutes for the alfalfa treats to harden.

5. Allow the treats to harden and cool before removing from the mold.

6. Use a small drill bit to put a tiny hole in the hardened treat to run a piece of wire through if hanging inside the chicken run.

The most hated barnyard winter chore is dealing with frozen livestock water – or worse yet, hauling water. The best gift my hubby ever gave me, and he is a good and constant gift giver, is running water in the barnyard. Even though I do not have to haul water to the barnyard, what I put into the chicken coop waterers does still freeze.

Thankfully, we have a pond and creek that are accessible by all of the livestock when they are turned out. But, last winter had such severely cold weather, both froze over and even water I turned on at barnyard had to be pounded on with a tire iron to break up the ice after a half an hour or so of being out of the line.

There are several things you can do to keep chicken and duck water from freezing – and you may need to employ them all.

1. Purchase heated poultry waterers that are plugged into an electrical outlet or generator.

2. Buy a livestock water heater that is placed under or inside the watering device and plugged into an electrical outlet or generator.

3. Purchase a “pig blanket” and put a non-plastic waterer on top of it…and plug it into an electrical outlet or generator.

4. Fill plastic water or soda pop bottles with 50 percent salt and 50 percent water, and float them in the waterer to keep the water moving at least slightly to deter freezing. This non-power method typically works until the temperature gets down to about 15 degrees F (-9 degrees C).

5. Using black rubber livestock tubs to water the flock may help reducing the formation of ice because the black coating attracts and holds heat better (without cracking) than plastic waterers.

It is never a good idea to keep food or water inside the chicken coop – especially water. Dropped food will attract mice (which spread disease) into the coop and splashed water (a particular problem if you have ducks) will increase moisture on bedding, therefore increasing the chance of mold growing.

Even if you use one or more methods to keep water in its intended liquid form, you will still need to check the waterers at least twice a day to make sure the flock has not been reduced to pecking at ice to quench its thirst.

To coerce the birds outside, provide extra coverage areas for them to use as a shield from the elements, so the flock can wander about without getting their feathers wet when it is snowing.
I place a tarp over the top of the run above the coop exit area, and another one near the human run entrance at the other end – above the ducks’ baby pool.

The middle of the run is intentionally left open so the birds can feel whatever sunshine can exist on any given day.

Some chickens, more so than ducks, will not put their feet into the snow. This fact alone can keep the flock members inside the coop – especially if the snow-shy bird is the rooster or lead hen.

Although this method will not last the entire winter, you can place a tarp on the bottom of the chicken run, and cover it with a thick layer of straw so the snow will filter through and not create a thick white blanket that deters the birds from coming out to spend time outdoors.

If a roost of some type does not exist near the coop to run entryway, build or buy one. Birds that do not like neither snow or temperatures below 30 degrees F (-1 degree C), might be enticed to go sit on a roost to avoid touching that white nasty stuff and be off the ground where the air is warmer.

Increasing the protein intake during the winter will help the chickens and ducks put on extra body weight to help keep them warm. Instead of feeding them once a day, put food inside a feeder so the flock can have free choice meals throughout the day. 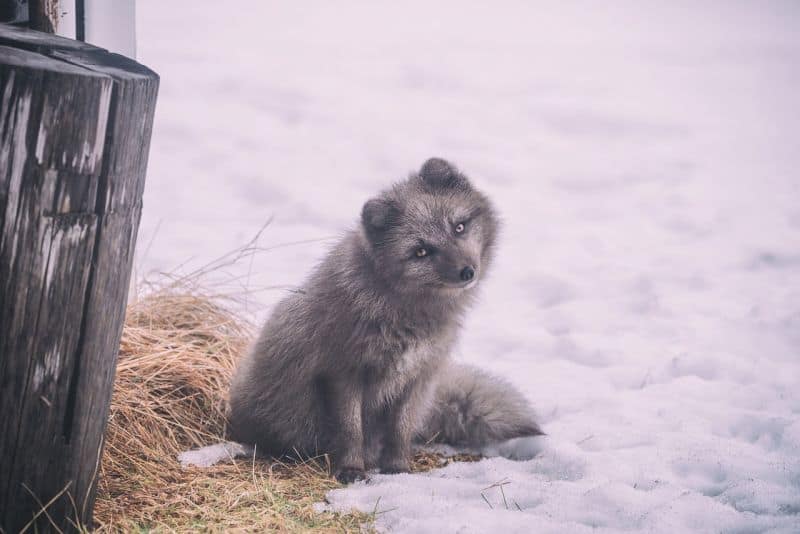 Before the snow begins falling too heavily, complete a thorough inspection of the chicken coop and run. Boards become warped, disintegrate, loose, and so does the hardware cloth that covers vents and your run area – support posts can become movable as ground softens, freezes, and thaws again.

Predators will take advantage of any little opening to climb claw their way in out of the cold in hopes of an easy meal.

Remaining diligent before winter fully arrives and throughout the cold weather months will help secure the health and well-being of your flock of meat and egg birds. Keep a record of eating, drinking, and egg laying habits – as well as shell quality, to help you detect a potential illness or injury in flock members before it spreads or becomes too severe to treat. This recordkeeping will also help you better estimate egg output during the winter – and feed expenses for the following year.

Print or Save this article as PDF
About Tara Dodrill 192 Articles
Tara lives on a 56 acres farm in the Appalachian Mountains, where she faces homesteading and farming challenges every single day. her homesteading skills are unmatched, she raises chickens, goats, horses, a wide variety of vegetables, not to mention she's an expert is all sorts of homesteading skills such as hide tanning, doll making, tree tapping and many, many more.