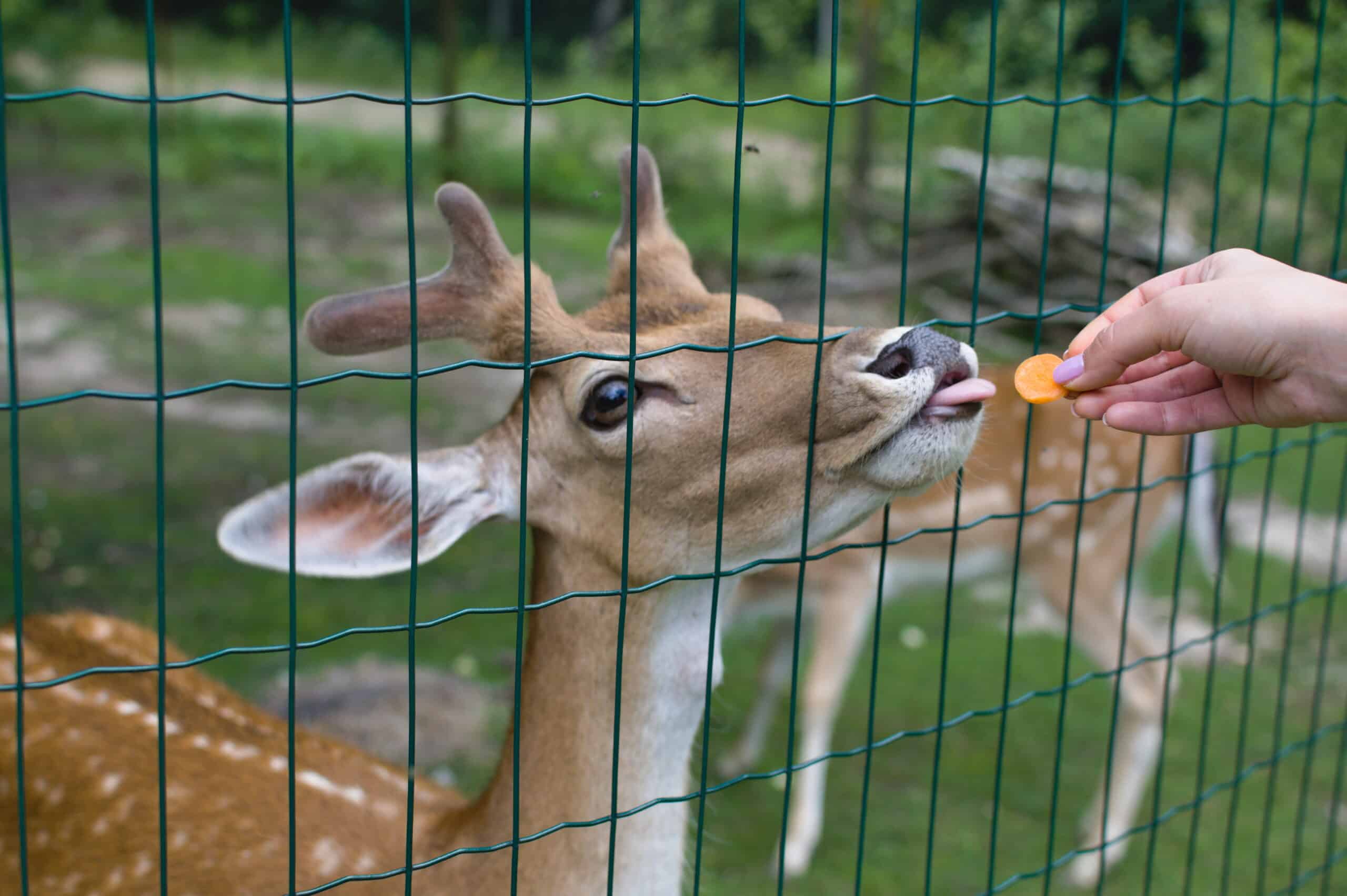 If you grow corn, you are probably already well acquainted with the damage that whitetail deer populations can do to your crops. Truly, it seems like there is nothing that your average deer, males and females alike, loves more than corn!

Trying to protect your field can seem like a losing battle, and I don’t know anyone growing corn that feels differently.

The other day, an old family friend called to see if we could use any fresh corn. Of course, I never turn down anything, so I thanked him so much for his generosity.

I shared with him that the deer have completely demolished our corn crop this year. We haven’t gotten a single ear!

Upon hearing this, the elderly gentleman said to me, “My mama used to say that if you sprayed purple jello on yer corn and yer melons, it would keep the deer away.”

I was intrigued, “Purple jello? Really! Do you make it into jello first, or how do you do it?”

He explained, “Pour a box of jello into a 1 gallon hand sprayer or something, and fill it with water. Then just spray it on your plants.” “I don’t know if it works, I’ve never tried it, but my mama used to always say that.”

Now, I’m not sure about the jello trick that my friend shared with us although I’m willing to try anything once. Luckily, I probably don’t have to resort to that in desperation because there are several proven methods for keeping deer out of your corn and away from your patch.

From the subtle to the extensive, there is a method that will suit any budget and any property. I’ll tell you about six of them in this article so you can be sure of bringing in a good harvest.

One of the most tried and true methods for controlling domestic and wild animals alike. Electric fencing is an act of deterrent method because it gives any animal interacting with it a strong incentive to stay away.

The sharp pop of an electric fence will definitely convince a deer to run for the hills, and with a little luck it might not come back.

That being said, electric fencing, though reliable, is not perfect. White-tailed deer as you probably know are incredibly agile, capable of leaping to tremendous heights and across long distances.

If a deer is highly motivated by food, and they all are, it might make a go for it and just jump over your electric fence to reach the corn. If they don’t make contact with it, it won’t work.

Electric fencing can be cheaper and easier to install than other types of wire fence, especially on large fields, but you might not realize any savings if you’re trying to build it taller and taller to prevent deer from jumping over it.

Despite the shortcomings, it is still a worthwhile option especially if you’re only worried about a handful of deer.

If you want to try a solution that is easiest of all and quick to implement, you can reach for over the counter deer repellents.

Available in the form of liquid, powder or larger granules, these repellent chemicals are designed to smell incredibly offensive and unsettling to deer, hopefully convincing them to stay away from your cornfield.

Now, these chemicals have pros and cons as you might imagine. Probably their best attributes is that they are readily available, incredibly quick to implement and also easy to use compared to other solutions on this list.

You’ll just mix them up and spray around the perimeter of your corn patch or grab your broadcaster and do the same thing with granules. However, the downsides are that they can be expensive, require fairly regular reapplication and the fact that they flat out just don’t seem to bother some deer.

Also you might need to be careful with how closely you apply it to your corn, as some of them could be harmful to plants. Always read the instructions!

If you haven’t had any deer problems in the past but notice you have a couple of raiders getting after your corn, you are well advised to give these a try before you move on to other more involved solutions.

One of the very best defenses against deer, curiously enough, is netting. Using nothing more than lightweight netting or fishing line, some reflective strips of tape or foil and some lightweight stakes it is possible to erect a tall “wall” of netting around your corn for not too much money.

The biggest advantage of netting over traditional fences is that it is far cheaper and also far easier to build tall enough to prevent deer from just leaping over it.

Now, this is not to say that netting will be foolproof, and your average mature deer can leap upwards of 9 ft in the air, meaning you’re still going to have to build a pretty high if you want certainty.

Most users of netting for this purpose try to keep it about 7 ft off the ground and hope for the best.

Now, a couple of things to know about knitting before you install it. First and most importantly you must make sure that your stakes are sturdy enough to hold up a span of it, and your corner stakes should be larger and sturdier than the ones running between them.

Also, do not neglect to add strips of reflective tape, foil or some other attention getting material throughout the netting itself so the deer can see it, especially at night.

Most of the netting that is sold for this purpose tends to be very lightweight and deer that blunder into it might get tangled up (bucks in particular).

Not for nothing, they could punch a hole in your netting or tear it down trying to extricate themselves, meaning that other deer would be able to get at your corn when they please. Preventing deer damage to your net is critical for continual protection.

One fairly high-tech option that works well for repelling deer is motion lighting, or lighting that is on a timer.

Small, stake-mounted and battery operated or solar powered deterrent lighting maybe red or white in color and set to go off when they detect motion or to be on at certain times, usually at night.

Lights easily spook most deer, and the idea is that these lights with their erratic flashing patterns disturb the deer enough that they stay well away from them.

This is a great, low impact option that can work very well for curbing the night time snacking of most deer. These are also easy to install and once properly set up require very little in the way of babysitting.

However, they aren’t foolproof. Some deer can become used to the lights, even if you take pains to rearrange them periodically.

Rotation can be a chore if you have many of them. Also they don’t do any good if they lose power for some reason, so if the batteries run out or if you’re dealing with many cloudy days that don’t sufficiently charge the solar cells, they aren’t going to work well or for long.

These units, depending on what you buy, may also be pretty expensive and so they aren’t the best choice for everybody. That being said, for ease of installation and autonomous operation they remain a good option.

Another high-tech choice, ultrasonic noise makers have long been employed as a deterrent against many animal species, deer included.

The sensitive hearing of deer allows them to perceive many sounds that are beyond the range of human hearing and these ultrasonic noise makers take advantage of this fact by emitting a sound that is maddening to the creatures.

Is easy enough to understand how this works. Ideally, the deer won’t come anywhere near the things when they are operating.

Ultimately, they can be remotely activated or motion activated to turn on when deer draw close, hopefully startling them into running back to the woods and away from your corn.

Of course, that is how they are supposed to work. In reality, they are somewhat erratic.

Some users report excellent success with these devices, while others swear that they don’t do anything at all and the deer walk right up to them and happily munch away on the corn. This might be something of a gamble for devices that can be fairly expensive.

Try them and if they work for you, great, but be prepared to follow up with a backup plan and don’t forget to change the frequency every so often so deer do not grow used to it.

And what is sure to be the most surprising option on this list, it turns out it is indeed possible to keep deer away from your corn, or at least keep some deer away, using nothing more than classic Irish Spring bar soap.

Yes, it’s true. For whatever reason, there is something about the fragrance of Irish Spring that can offend the delicate senses of many mammals, foremost among them deer and rabbits.

To take advantage of this interesting quirk, all you need to do is cut up a bar of Irish Spring into cubes or grate it down into shavings using a cheese grater. Then place the pieces into small cloth bags, tea sachets or something similar that will allow the fragrance to waft out.

Hang these sachets from short stakes placed around the perimeter of your corn and you’ll be all set.

Alternately you can scatter these shavings or pieces on the ground although this does not seem to work as well. For small fields, this is a great option.

Why this works in the first place, we are not quite sure…

The idea is that there is something intrinsically offensive about the compounds present in the soap, or else that animals, particularly prey animals, associate the smell of soap with hunters, and hunters generally mean death so animals tend to stay away from any perceived human presence.

Whatever the case, it works, it’s cheap and you’ll only need to replace your soap every couple of weeks, or a little more often if you are getting rain.