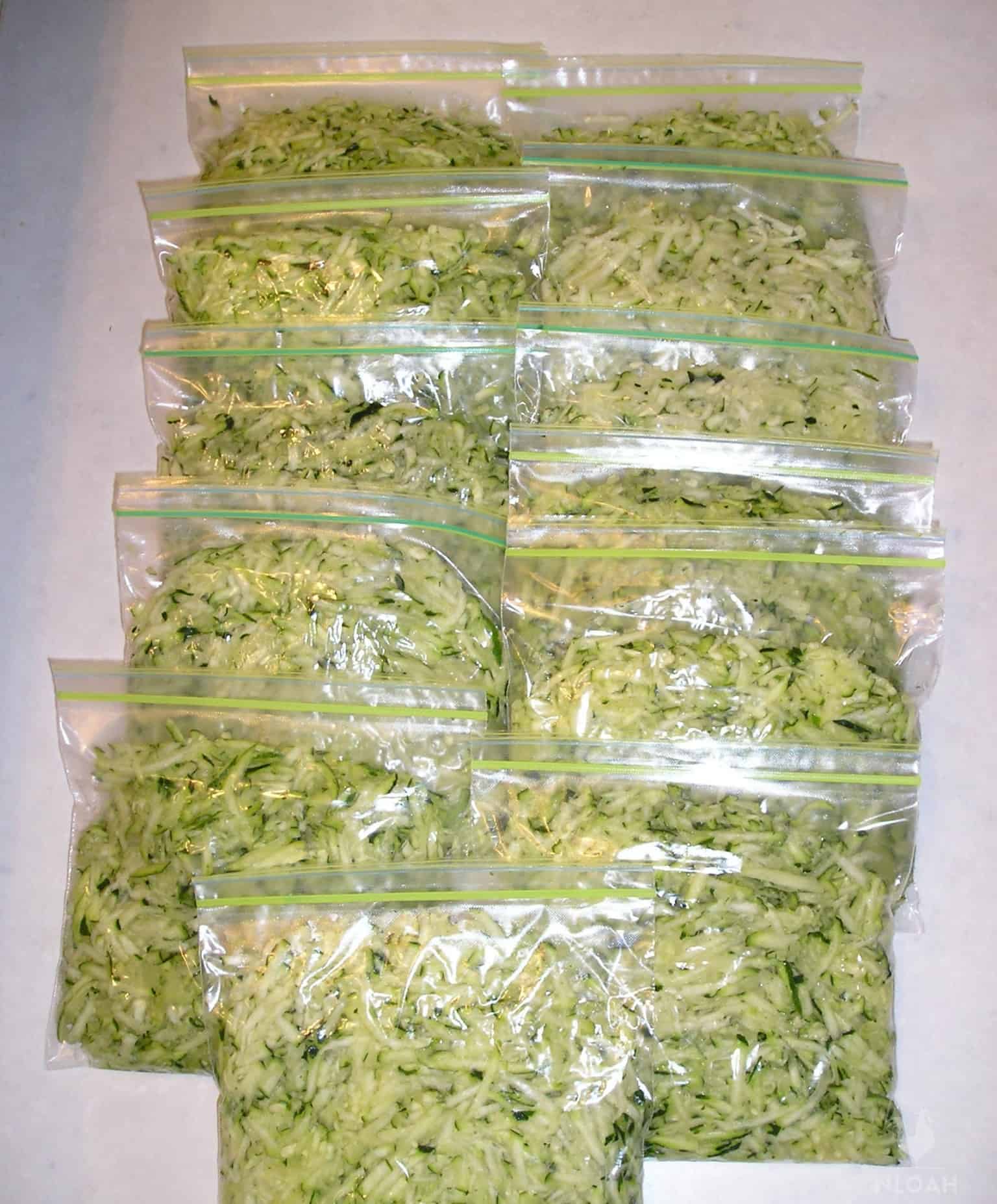 When a friend blessed us with about 36 pounds of zucchini the other day, I considered how I would put it to use. The only way we really eat zucchini is baked with cheese and spices, or in Zucchini Bread. We don’t really like it canned, dehydrated, or even in soups, really. But we all really love it in a quick bread.

There seems to always be an overabundance of zucchini at the middle to end of summer, and it can be tough to preserve. It spoils quickly when left out in the open air, and when you freeze, can, or dehydrate it, it often loses its texture and turns into a mushy, tasteless mess.

We did grill some, which turned out yummy. But there was a ton to use, and it wasn’t going to last more than a couple of days before starting to rot. What to do?

And then I had an idea. Why not shred it and freeze it for future quick breads? After a little search online, sure enough it can be done. But is it possible?

Can You Really Freeze Shredded Zucchini?

Yes, you can definitely freeze shredded zucchini, and it’s actually pretty easy: you just wash it, peel it, shred it, put it in freezer bags and then into the freezer.

This is definitely my new favorite way to ‘put up’ a bunch of zucchini. And I know we’ll use it.

Why Does Zucchini Need to Be Frozen – and Not Canned?

Some people will tell you that zucchini and other summer squashes can be canned. This is not recommended.

In fact, the Untied States Department of Agriculture has withdrawn canning recommendations because there has been so much uncertainty about how to determine appropriate processing times.

This is true. Pressure canning removes the risk of botulism, a dangerous disease caused by bacteria that can’t survive in the 240 degrees reached by pressure canning.

Here’s the problem, though. When you try to can a super-soft vegetable like summer squash, it will become soft and pack tightly into the jars, making more of a paste or puree than the slices or cubes you initially placed into the jar.

First, get your hands on some good, small to medium sized zucchini. You don’t want a humongous zucchini ’cause it’ll be very seedy and dry.

That being said, if you have several zucchinis and want to process them quickly, a large zucchini is best shredded and frozen rather than eaten fresh.

Although the moisture content of the zucchini doesn’t matter as much when you’re freezing it, the seeds can pose a problem because you don’t want to bake them into your bread, and they can be tough to sort out after they have thawed. The best zucchinis for freezing are those that are young and thin.

Wash and dry the zucchini well, then chop off each end. You don’t have to peel them, but you can if you so choose. The taste and texture of the frozen, shredded zucchini is roughly the same with or without the skin.

However, if the skin has any bad spots or is exceptionally dirty in one area (as well as if it was not grown organically), I recommend peeling it.

Zucchini skin can harbor some nasty stuff, so if you don’t know exactly how it was grown, peel it just to be safe.

If you want to preserve the color and texture of your zucchini, you may also choose to blanch it. To do this, bring water to a boil and cook your zucchini for three minutes.

Drop it in an ice bath after it’s boiled, and then proceed to the next steps.

Using a cheese grater, shred up the zucchini. I use a medium shred because it makes the work go by more quickly, but you can do a fine shred if you prefer.

If you have a food processor, you can make quick work of this process, and feed all of the zucchini in, one at a time.

Using a food processor presents another advantage in that you don’t have to worry about accidentally shredding your knuckles, plus you can customize the size of the shreds to very small or very large, depending on your preferences and the way you intend to use the zucchini.

Fill Ziploc freezer bags with however much zucchini your favorite bread recipe calls for.

I filled my bags with about two cups of zucchini, twice as much as my zucchini bread calls for, so that I can make a double batch of bread each time around.

Squeeze as much air as possible out of the bags to prevent freezer burn, and also to make the bags easier to store.

If you have a food sealer device, like the one made by FoodSaver, you’re in luck.

Using a sealer is a way to preserve your vegetables for even longer, as it forms an airtight seal that is impossible to obtain using traditional plastic (Ziploc) bags.

However, keep in mind that if you are using a food sealer, you may add an extra step because you will need to constantly drain the machine of the excess liquid that is leached out of the zucchini as it seals.

If I use my FoodSaver to freeze zucchini, I generally let it go through two cycles in which I remove air, remove more air, and then finally, on the third cycle, allow it to seal.

You will need to stop between cycles and dry off the interior of the unit and remove any excess moisture in the drip tray, too.

Using a FoodSaver isn’t mandatory and can be helpful in that it will remove a lot of the extra moisture in your zucchini.

However, it can take some more time to freeze your shredded zucchini as you will need to keep stopping to drain excess moisture. This does add a step in the initial preservation process.

I usually freeze zucchini in plastic bags because it takes so long to use the FoodSaver, but it’s up to you. No matter which method you choose, it’s recommended that you flatten out the zucchini as you add it to the bag and press air out.

This will get rid of excess air and also allow the bags to flatten out for easier freezer storage.

Regardless of the process you choose to use, make sure you store all the bags flat in the freezer. When you initially freeze the bags, place them in a single layer.

This will allow for more even distribution of the cold air, making them freeze faster and more evenly. Once they have frozen solid (check back in twenty-four hours), you can rearrange and stack them to make more room for other frozen food.

Freezing cubed zucchini is another excellent, quick alternative to freezing shredded zucchini. To do this, you should blanch your zucchini first by the steps I mentioned above.

This will deactivate the enzymes that causes zucchini to become mushy and discolored, preserving some of the texture during freezing.

If you are freezing cubed zucchini, you really only need to blanch it for about one minute or so. Blanch after you have washed and cubed your zucchini.

Some people recommend adding salt during this process. I’d hold off until you thaw the zucchini – it can make the zucchini mushy during freezing.
Now, here’s how freezing cubed zucchini is different.

If you freeze it immediately after it has blanched, it will freeze up into a zucchini ice cube and won’t be nearly as useful in the kitchen. Instead, freeze your zucchini in a single layer on a baking sheet lined with parchment paper.

This will allow each cube of zucchini to freeze separately so that you can store them as loose bundles in freezer bags.

You can use frozen cubed zucchini in a variety of ways. It’s tasty in soups, pasta sauces, and casseroles, but know that it might become mushy in salads or stir-fries.

It should keep in your freezer for up to three months before developing signs of freezer burn.

Frozen zucchini should be used within twelve months, although sooner is obviously better. You don’t really run the risk of contracting a foodborne illness with eating older frozen zucchini, but the taste will be seriously impacted the longer it sits in the freezer.

If you are having trouble getting rid of the moisture in your thawed zucchini, here’s a simple trick.

The liquid should leach out. Whatever liquid is still remaining in the bowl, you can strain into a colander. You will have much less water in the zucchini when you are ready to cook it.

That being said, if you use a food sealer, you may be able to extend the longevity and overall quality of your frozen zucchini just a tad bit longer.

Just make sure you label all of your bags with the date you froze the zucchini, as well as the contents of the package (believe it or not, it will become hard to figure out what’s inside after a while!).

Zucchini has a tendency to look like a big, frozen block of yellow-green mush when you take it out of the freezer, especially if it’s been in there a while.

A common mistake that many people make when freezing zucchini is to freeze an entire zucchini – or even sliced zucchini spears – whole, without shredding, dicing, spiralizing, or cubing it.

This does save you an initial step in the preservation process, but adds a whole new headache in that zucchini frozen in this manner becomes a soggy, sodden mess.

It is very difficult to do anything with it at that point – even shred it – besides pureeing it, and it also loses a lot of flavor. To avoid this, make sure you cut your zucchini up in some way before freezing it.

When you freeze zucchini, it does make it more watery upon thawing, but this isn’t a problem when adding it to a recipe.  Just be sure to thaw it and drain off any excess liquid before using it in a recipe (or even while cooking).

While zucchini bread is definitely my favorite way to eat thawed shredded zucchini, it can also be used in pastas, stir-fries, smoothies, casseroles, or soups. Experiment until you find the recipes that work best for your family’s tastes, schedule, and budget.

140 thoughts on “How To Freeze Shredded Zucchini For Quick Breads”

"Hi! I'm Kendra. I'm a wife, mother, and homesteader. I love everything that has to do with simple living. I'm a canning instructor, an avid gardener, and a constant learner of old-fashioned skills. Here is where I share it all. Welcome to the adventure!"
Mugoyo: Sweet Potato and Bean Loaf Recipe
Can You Freeze Apples and Pears?
How to Make Lard Step by Step
Homemade Cream of Chicken Soup
Top 20 Edible Flowers to Try Out