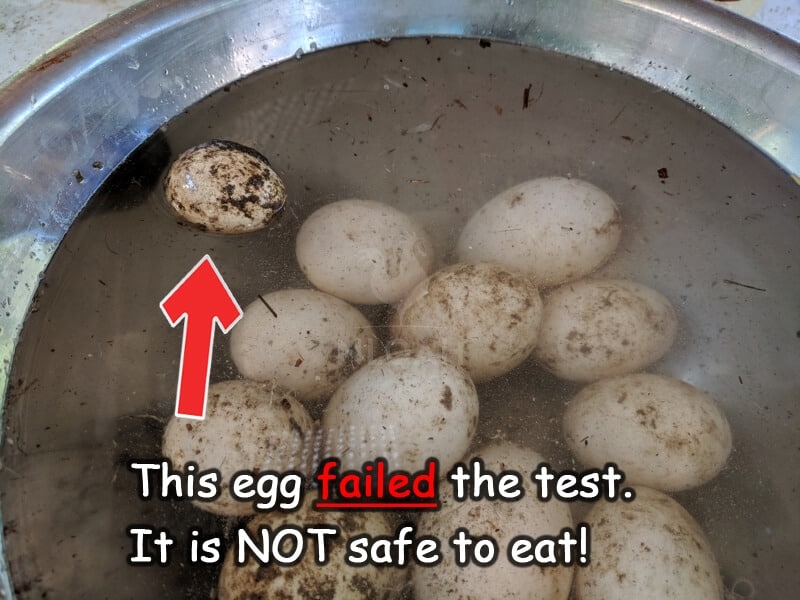 Rotten eggs have a distinctive and nasty smell that surely would deter you from eating, cooking, or baking with one, but egg that has merely gone bad will not necessary boast that rancid odor – the natural “do not eat” warning.

Conducting the old-fashioned (as well as tried and true) egg sink or float test is a far better way to determine if an egg is not fresh enough to eat than throwing caution to the wind and simply consuming it to find out.

Salmonella poisoning or other types of illness can result from eating rotten eggs. Eating a bad egg could merely give you a stomach ache and induce vomiting or diarrhea.

But eating just a single rotten egg that is contaminated with the salmonella bacteria could land you in the hospital with a possibly deadly illness.

The Egg Sink or Float Test

Step 1. Fill a bowl with enough cold water that the collected chicken eggs can be covered by about 2 inches when submerged.

Step 2. Place an egg gently into the water.

If the egg sinks, it is fresh (only 1 to 3 days old usually) and can be used.

If the egg remains submerged, but is standing up with the wide side down, it may still be safe to eat, but is getting old and was likely laid about 5 to 7 days ago.

If an egg floats, it is either cracked or too old to be safely consumed. You can see a floating egg in the picture below:

Some folks swear that hard boiling eggs that stood upright during the egg sink or float test is the best way to eat them. The extra air that materializes as an egg ages from fresh to getting close to rotten may cause them to be easier to peel, as well.

There is only one drawback to the sink or float test: once the eggs have been submerged in water, the protective bloom that covers the eggs during the laying process has been disturbed or removed. The bloom covering prevents oxygen, bacteria, and debris from attaching to the shell and permeating the egg.

The bloom on farm fresh eggs are what also helps protect them from spoiling when stored at room temperature of any temperature over the 45 F (7 F) setting that is standard on most refrigerators.

Eggs that have been sunk or float tested should always be stored in a refrigerator, and ideally consumed within two weeks even if they sunk when submerged in the cold water.

Before you store the eggs in a carton in the refrigerator, especially if you are going to use the carton again when collecting eggs from your chicken coop, go ahead and cleanse them thoroughly to remove dirt and feces.

5 More Easy Ways to Tell If an Egg Is Bad

Method #1. Conduct a sniff test. If the egg smells nasty or moldy at all, pitch and do not eat.

Method #2. Complete a visual test. If the eggshell is cracked even slightly, feels unusually dry, or has blue, pink, or shades of green showing through from inside the egg, bacteria has likely infiltrated the egg and it is not safe to eat.

Method #3. Shake the egg. Put the egg close to your ear, and give it a few shakes. If you hear a sloshing type of noise, it is highly likely that the egg has gone bad.

Method #4. Crack the egg open. Inspect the yolk and the white after cracking the egg open on a plate. If the yolk and white separate distinctively, the white spread quickly about the place and has a general watering texture – as well as both the yolk and egg being unusually light in color, the egg is likely rotten.

5. Candling. Take the egg into a dark area and hold a candle or flashlight closely beneath it. Title the egg gently from left to right so it is fully illuminated in each area while you inspect the interior contents from the outside.

The air cell or air pocket should be small if the egg is fresh – it expands as the unfertilized egg ages, or you will see a chick developing if it is a fertilized egg that has been sat upon by its momma hen.

"Hi! I'm Kendra. I'm a wife, mother, and homesteader. I love everything that has to do with simple living. I'm a canning instructor, an avid gardener, and a constant learner of old-fashioned skills. Here is where I share it all. Welcome to the adventure!"
Do Emus Lay Eggs? If so, How Many?
Fighting Roosters:
What Is the Difference Between a Buffalo and a Bison?
Bumblefoot in Chickens and Ducks - Here's How to Treat It
Bantam Chickens: Everything You Need to Know