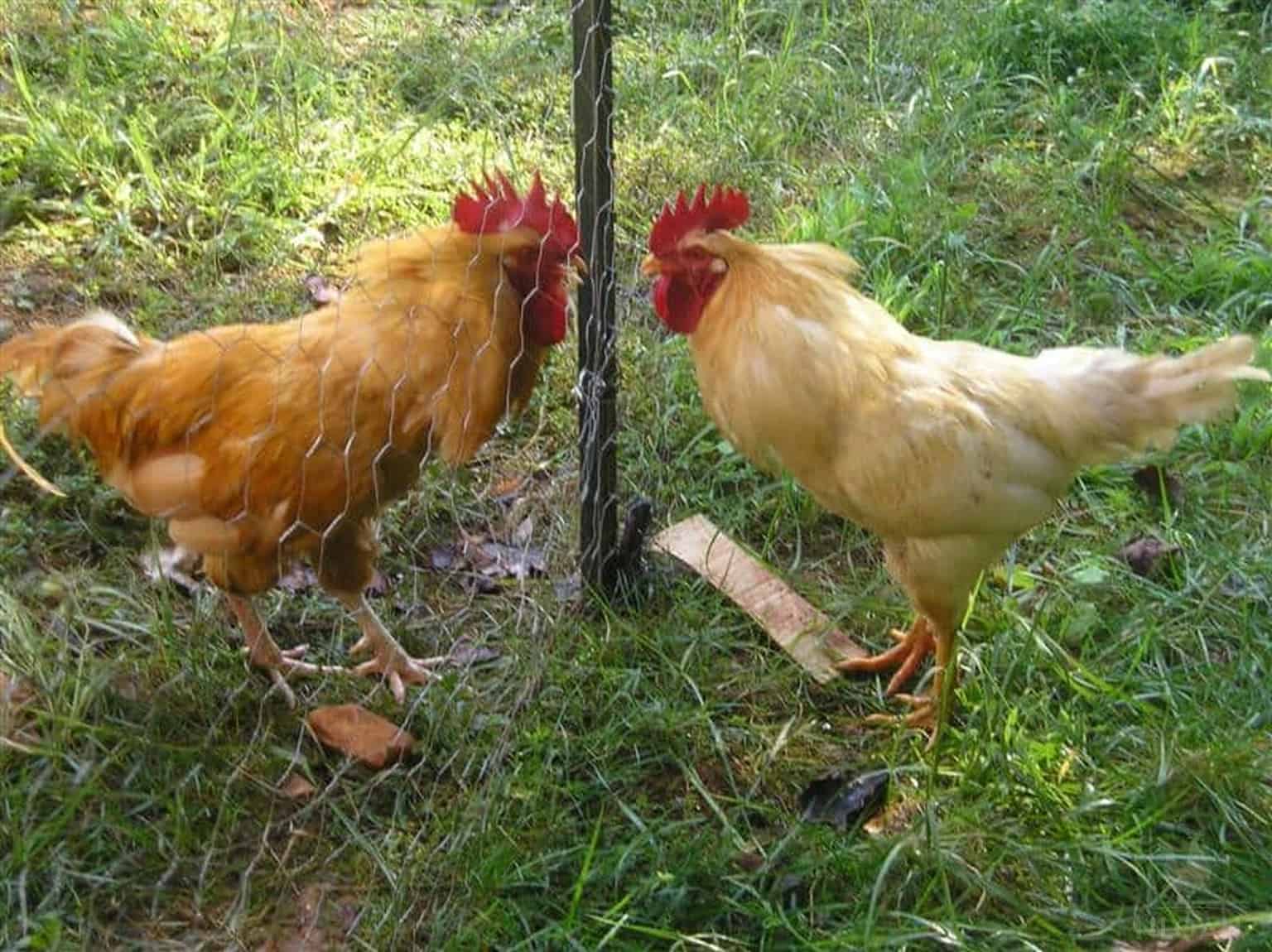 A few weeks ago, when we got our new Buff Orpington hens, we got a beautiful rooster to go along with them. We knew that he and Dirty Wilson wouldn’t get along, but we planned on keeping them separate. We figured a fence would be sufficient at keeping them apart.

The very first day that we put the hens and new roo in their newly constructed yard, the two roosters immediately went face to face with only chicken wire between them. I stood there watching them spat for about 10 minutes. They fluffed their necks, and kicked at each other, but it didn’t come to much so I decided no harm would be done. Surely they would bore of this quickly.

An hour later I went back outside, just to check on how the hens were doing in their new setup. As I approached the coop I was horrified to find the two roosters still going at it. Only this time, they were both covered in blood! The one on the inside looked the worst. Blood was poured out over his head from his comb. He kept shaking his head to get the blood out of his nostrils and eyes, splattering it everywhere. Dirty Wilson was covered in blood too, but it was mostly the other roo’s. I had to take a big stick to break them up, then grabbed Dirty Wilson and put him in a smaller coop elsewhere.

(he wouldn’t let me get a picture of the worst side!)

I felt so bad for the injured rooster! He must have gotten his head stuck in the wire for the other rooster to have been able to get at his head so badly. I wanted to help him, but wasn’t sure what I could do. Some of you on facebook recommended using Blue Kote, or cornstarch on the wounds, and some said to just let it heal. I ended up wiping his head down a little with a wet washcloth (though he hated me doing so), and leaving him to heal. An hour later his comb had scabbed up, and he looked much better.

I called my mother-on-law later on and told her about the drama that had unfolded earlier that day. She asked me if I’d put the hen that usually roams free with Dirty Wilson in the run with the others. Yes, I had. She gave out a big, “Ah ha!” and went on to tell me that what I had essentially done is stole his mate away, and he was jealous trying to get her back! She suggested that I let out his hen.

I contemplated freeing this hen. The whole reason for putting her in the run was to protect her from predators. And, was it worth it to risk losing an egg layer just to keep the rooster happy? A rooster that I don’t really need. But, in the end, I did let the hen out. I felt bad for them being separated. Oh well.

The roosters did fight one more time after that, but it wasn’t a very big fight, and nobody got really hurt. It has been a couple of days since then, and the roosters seem to be happy to stay away from each other now. Hopefully they will continue to keep their distance.