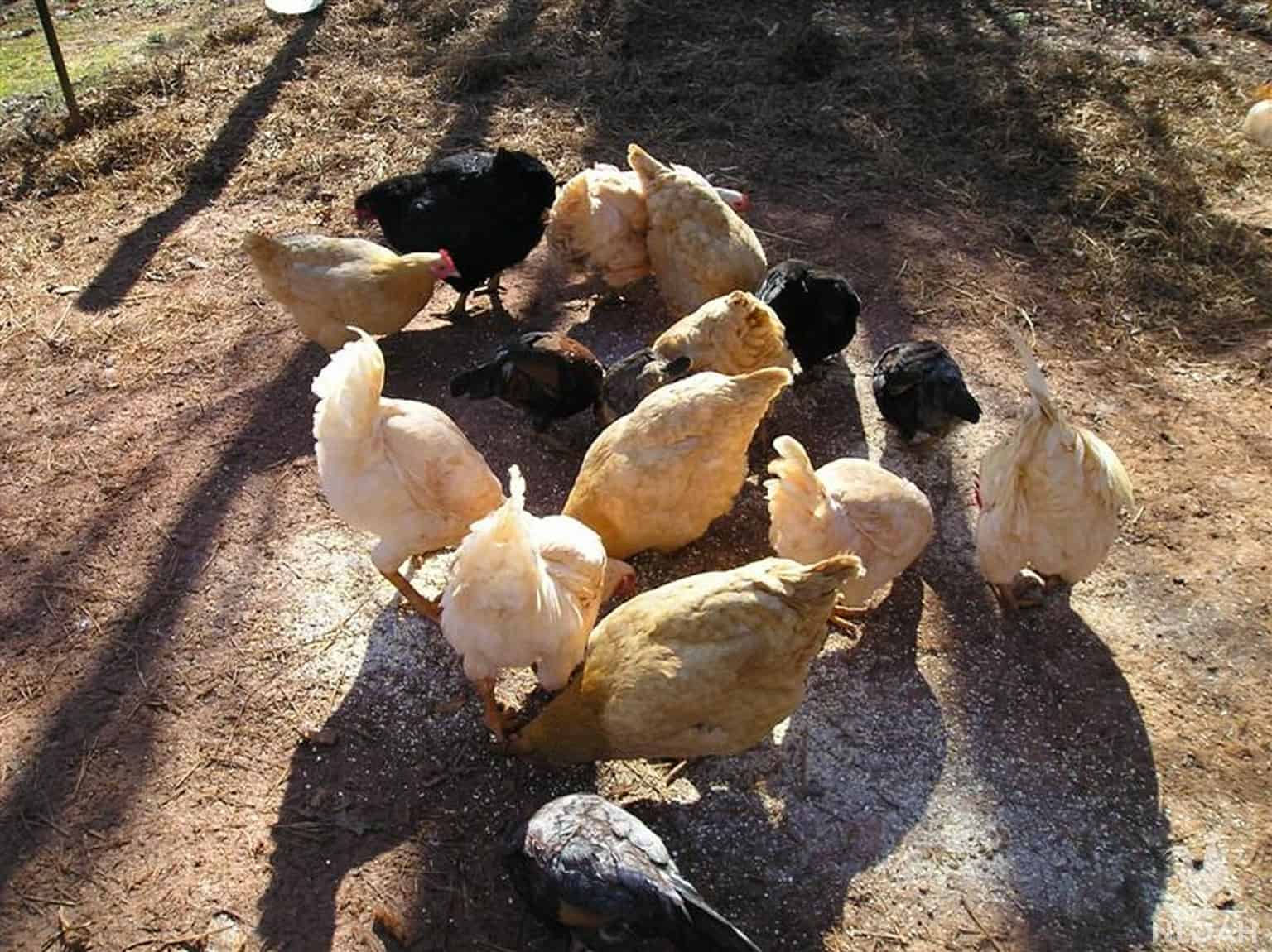 If you have a farm or a homestead, you’ve probably heard about diatomaceous earth, or DE, before. This powdery substance has been used for a very long time to control pests both on livestock and in the places where they live and rest.

It is especially useful for getting rid of fleas, mites, ticks, and other critters on chickens since they dust bathe anyway.

Some people even assert that DE has benefits for chickens when they eat it. Is it true? Can you feed DE to your chickens?

Yes, so long as it is sparingly mixed in with food, diatomaceous earth can benefit chickens when they eat it. It improves digestion, provides trace minerals, and anecdotal evidence suggests that it can help to control internal parasites as well.

Folks that start using DE for their flock often report significant improvement in overall health over time, especially concerning parasites and other pests.

If you are already treating your chickens with DE externally or just using it around the coop, there’s no reason you can’t start supplementing their feed with it for even greater benefit.

Keep reading, and we will tell you everything you need to know about feeding your chickens diatomaceous earth.

What is Diatomaceous Earth?

If you are unfamiliar with DE, an explanation is probably in order so all of the following will make sense. Diatomaceous Earth is a super fine powder that is typically a gray, beige, or off-white color.

The stuff is highly abrasive and has a drawing effect on skin and other tissues. Sold at retail, you’ll usually find it in heavy-duty plastic bags, tubs, or other containers where it is available in bulk.

But DE isn’t just some powder. Well, it is, but it’s what it’s made of that makes it so remarkable.

Diatomaceous Earth is actually the finely ground, fossilized shells and carcasses of tiny, ancient sea creatures called diatoms. That’s where it gets the name, diatomaceous.

Long story short, over countless years the little shells of these creatures built up on the seabeds and river bottoms all over the earth, accumulating and accumulating over time until they are basically now mineral deposits that can be mined, processed, and finally turned into diatomaceous earth, a material with many purposes.

It’s definitely an interesting story, but what we really need to know is what we can use this stuff for with our chickens, particularly when we feed it to them.

What are the Benefits of Them Consuming DE?

Diatomaceous earth has several benefits for chickens when consumed. Namely, multiple studies have shown that it can improve the digestion of food and the absorption of nutrition.

This will only benefit your chickens’ health overall and is of particular benefit to older or infirm birds.

Second, DE provides trace minerals that all chickens need in the form of silica, alumina, and iron oxide.

These are minerals that you don’t see pop up on the typical recommended lists for chicken nutrition, but that is why they are trace minerals.

Despite this, they are still vital to a chicken’s health, and you should not assume that they are ordinarily getting them from their regular diet or supplemental foods.

Adding DE to their usual food, though, will ensure that they get them in the quantities that they need, however small.

Another significant benefit is that several studies have claimed supplementing a chicken’s diet with DE improves both the volume and quality of egg production, particularly the eggshell, yolk, and albumen.

Check out the Mathis and MacDonald study of 1995 for a recent investigation, and one by J.C. Eshleman way back in 1966.

Lastly, there is plenty of anecdotal evidence from farmers and backyard chicken keepers along with promising suggestions from a few laboratory studies that suggest DE can have a beneficial effect for dealing with internal parasites, much in the same way that it can for external parasites.

A quick explanation: diatomaceous earth, though a powdery material to us when we are handling it, is actually quite jagged and sharp under a microscope. Each particle looks a little bit like a gnarly morningstar under high magnification!

Because of its shape and its material characteristics, diatomaceous earth lacerates and punctures the shells and tissues of tiny insects and other critters that otherwise plague our chickens.

This causes them to, in effect, bleed out by dehydrating them since their bodies can no longer hold moisture in.

It works like a charm against fleas, ticks, lice, mites, and other insects over time, and it is thought that it can do the same thing to internal intestinal parasites like worms and their eggs.

Proper scientific studies seem to be, typically, inconclusive on this matter but there are legions of farmers and chicken keepers that swear by the stuff for ongoing protection against most common internal parasites.

Considering that feeding DE to chickens has all of the other benefits we talked about above, there’s absolutely no reason you shouldn’t be adding it to their food so long as you don’t overdo it.

How Much Should I Add to Chicken Feed?

There is some contention about how much d e you should add to your chicken’s feed. Also, when I’m talking about feed in this matter I’m referring specifically to factory-produced pellets or other food, for the record.

You might be able to add DE to other kinds of whole foods and have your chickens eat it, but it probably isn’t going to work as well.

If you consult the package from some manufacturers, they will recommend you add no more than 5% DE to a serving of food by weight.

In practical terms, that would shake out to 1 lb of DE in a 20 lb serving of chicken feed. You can generally trust the manufacturers in this regard, but frankly, that seems like an awful lot to me.

How Do You Mix DE in with Chicken Feed?

Now, you can take straight DE and mix it in with your chicken’s dry feed thoroughly and then serve it to them with reasonably good results, but considering this stuff is so fine, so light and so likely to fall off of the food, you’re probably going to be wasting a lot of the DE as the chickens eat.

A better option, I have found, is to use a little bit of oil to promote the DE adhering to the food while also making the food a little more appetizing to your chickens.

You can use any chicken-safe food oil for this purpose, be it olive oil, fish oil, or something similar.

For best results, I like to mix in just enough oil to my known quantity of DE before adding it to the food, with the desired result being a sort of frosting texture that I can then thoroughly mix with the food before serving it to the flock.

How Often Should You Give Chickens DE?

You can mix in DE with your chickens’ food according to the method above once a week, or perhaps twice, depending on the results you are seeing.

keep in mind, if you are administering DE to their food in an effort to control internal parasites it will take time to work.

If you’re performing parasite egg counts or other inspection methods to check for the efficacy of the treatment, you’ll probably want to give it a couple of weeks at least to show improvement.

Can DE Harm My Chickens?

So long as you feed it to them in the quantities outlined above, or according to the manufacturer’s instructions, DE will not harm your chickens.

However, the material does have some attendant risks with its dry form. Particularly, it is an inhalation hazard.

First and foremost, you should only use food-grade DE for your chickens, not filter-grade DE. The latter has additives that you don’t want your chickens to ingest.

Even though the food-grade stuff is completely natural it is still highly abrasive and can cause irritation of the lungs or damage to the respiratory tract if inhaled in high enough quantities.

You’ll want to wear a dust mask when handling the stuff and take care to keep it away from your chickens in its raw powder form unless you are using it specifically and cautiously as a component in a dust bath or for external parasite treatment.

"Hi! I'm Kendra. I'm a wife, mother, and homesteader. I love everything that has to do with simple living. I'm a canning instructor, an avid gardener, and a constant learner of old-fashioned skills. Here is where I share it all. Welcome to the adventure!"
So, Can Chickens Eat Popcorn?
So, Can Chickens Eat Moss?
A Chicken Hospital Ward / Infirmary for Your Sick Chicks
So, Can Chickens Eat Peanut Butter?
Silkie Chickens: Everything You Need to Know