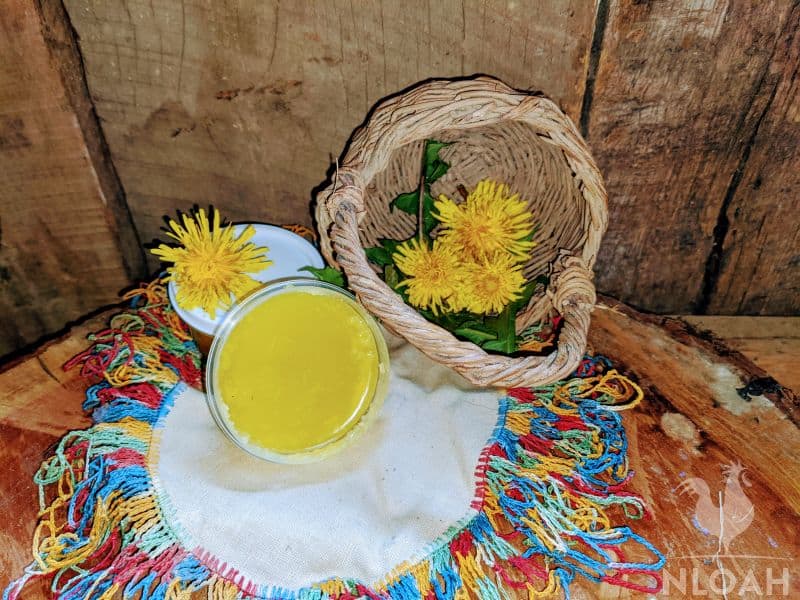 Dandelions have gotten a bad rap for far too long. They have summarily been dismissed as mere weeds, and get sprayed with chemicals to kill them every time their cute little flower heads pop up out of the dirt. Not only are these common backyard flowers edible, they may also boast natural healing properties.

Dandelion salve should be stockpiled on every homesteader’s “medicine” shelf. The infusion oil and salve made from these often overlooked plants has traditionally been used to treat aching muscles, sore tendons, arthritis, as well as rough and chapped skin.

Dandelions contain a significant percentage of folate, vitamins A,C, E, and K, iron, calcium, potassium, and magnesium. The flower heads, stems, leaves, and roots can all be used in salve and tincture making – and are edible, as well.

In addition to being used in herbal remedies, for centuries dandelion roots have been used as a coffee substitute and roasted for a nutritious and yummy snack. The flower heads have been used to concoct both hot and cold teas, as well as a sweet mead.

The leaves and stems from the dandelion plant can be consumed much like any other green, they can be eaten raw, cooked, or used as a base ingredient in a forage stir fry dish.

A real dandelion has a leafless stem that is hollow, and has beige coloring throughout. The stem in a true dandelion produces just one blossom.

Cat’s ear plants also have a branching stem like Carolina false dandelions and unlike true dandelions. All three of the similarly designed plants have toothed leaves that have a coarse texture. But, it is only the cat’s ear plant that has stiff and fuzzy hairs covering the leaves – hence the ‘hairy dandelion” nickname it has earned.

It costs mere pennies to make dandelions salve. The process is simple… but it is not quick. Before you can make the DIY all natural salve, you first have to pick dandelions and dry them – and then make a dandelion tincture.

Never use freshly picked dandelions to make the tincture. They simply contain too much water that dilutes the carrier oil in the recipe.

Fresh or damp dandelions will cause the oil to become incredibly sludge like and slimy. The added moisture content in the dandelions may also decrease the shelf life of the dandelion tincture (and ultimately the salve) exponentially.

You can dry the dandelions in a dehydrator on the herb, fruit, and nut setting (about 135 degrees) for about six hours. The dandelions can also be placed on a baking sheet in the oven at a temperature that is no hotter than 250 degrees for roughly the same time.

Air drying works just as well as at removing moisture from freshly picked dandelions, as is placing them in either a dehydrator or the oven – it just takes longer.

To air dry dandelions, separate them out onto a screen, towel, or similar item, making sure they do not touch. Place them in a warm and dry spot for several days until they dry thoroughly. Expect some of the dandelions to close up into little puff balls, which is fine.

If any of the dandelions flower heads “turn to seed” during the drying process, just pitch them. I typically have a few flower heads do this and make sure to pick a handful more than I need just in case some end up being too mature to make it through an oven drying or dehydrator drying process intact.

Here are the quick steps for making the infusion. For more detailed steps check out this other article.

This dandelion salve recipe makes roughly four to five ounces of salve. When the infusion and salve are both made and stored according to the directions, the salve should remain viable for at least 12 months.