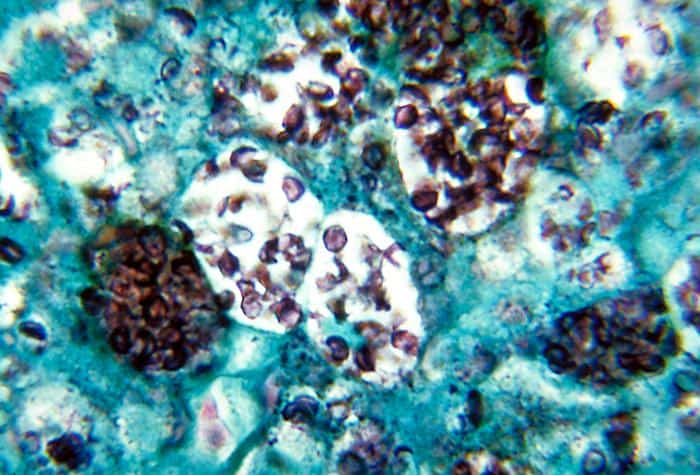 Wondering what histoplasmosis is – and whether you can get it from your chickens, an incredibly dangerous fungal disease?

Yes, you can catch histoplasmosis, and not just from your chickens, but fron other birds as well. On the homestead, you can typically catch it as you clean out the poop by stiring up the funal spores during the process.

That’s sad news, as it seems as though everywhere you turn these days, there are more dark headlines about all the diseases going around that has the potential to kill you.

Living in a rural area, I feel as though I am more or less buffered from the severity of many of these illnesses.

With various diseases and viruses spread across the planet, I feel lucky to be as sheltered as I am on my farm. Nevertheless, there are some unique risk factors to raising your own animals and growing your own food that you need to be aware of.

One of these is histoplasmosis. Although this disease, spread by spores of the fungus Histoplasma capsulatum, is very uncommon where I live, in New York, it is very common in the central and southern portions of the United States.

If you raise chickens, which you likely do, if you’re a homesteader, you’re at an increased risk of contracting histoplasomis. This disease is common in chicken coops and although chickens can’t catch it themselves, they can easily pass on the spores to you.

Histoplasmosis spores can be spread by birds such as:

But in this article, and for you, chickens are probably the primary concern.

Therefore, it’s critical that you take precautions if you work with chickens, who are known to carry the spores that can make you sick (yet are unaffected themselves).

Here’s what you need to know.

Histoplasmosis is an infectious (yet non-contagious) fungal disease that is caused by the spread of the spores of a fungus named Histoplasma capsulatum. These spores float around in the air when dirt or other kinds of material (like bedding) is disturbed.

The spores thrive in damp soil that’s rich in organic matter, like bird and bat droppings. It is very common in chicken coops as well as in old barns, parks, caves, and areas where pigeons frequent.

When airborne, the spores can travel hundreds of feet. Not everyone develops an illness when they are exposed to these spores, but when they do,s symptoms can be severe. Histoplasmosis is sometimes referred to as “cave disease” because it is often spread by bats, too.

Each year, it’s believed that around 250,000 people will be infected each year in the United States alone.

Since it’s not contagious, the spores can’t be spread from person to person. That’s the good news. The bad news, though, is that if you get histoplasmosis once, you can definitely get it again. However, since your body has experienced the disease before, you’re less likely to get it as severely.

Histoplasmosis is most common in the United States, where it’s found in the Ohio and Mississippi River valleys. It can be found in other places like Central and South America, Australia, Asia, and Africa, too.

The fungal spores exist practically everywhere in the world, but what’s interesting in that areas where the fungus is most common (like the river valleys mentioned above), up to 80% of people will show some kind of antibody response to the fungus, meaning they’ve been exposed to it at some point in their lives.
Who Can Get Sick from Histoplasmosis?

There are several groups of people that are more susceptible to getting sick from histoplasmosis. Unfortunately, if you’re reading this article, you’re probably one of them. If you are a farmer or somebody who works with chickens, you’re at an increased risk.

Similarly, if you work in pest control, construction, roofing, landscaping, or demolition, you’re also likely to catch the disease.

Fortunately, most people who get histoplasmosis never develop symptoms and never even know they are infected. Other people, like infants and those who have compromised immune systems, can suffer from some severe, life-threatening impacts.

For example, if you are older than 55 or a child younger than the age of two, you’re more likely to contract the severe form of the disease.

Other conditions that can weaken your immunity and increase your likelihood of getting very sick include HIV/AIDS, cancer (particularly if you are undergoing chemotherapy treatment), if you are using corticosteroid drugs or tumor necrosis factor inhibitors (used for rheumatoid arthritis), and any medications that prevent the rejection of organ transplants.

What Are the Symptoms of Histoplasmosis?

Histoplasmosis causes mild to severe symptoms that usually appear about three to seventeen days after exposure. These can include chills, fever, headache, dry cough, muscle aches, chest discomfort, and fatigue. You may also get a rash or joint pain. All in all, the symptoms are very similar to those of the flu.

If you have a chronic lung disease, like emphysema, your symptoms can develop into a more chronic form of histoplasmosis, too.

There are other signs of chronic histoplasmosis to look out for, like a cough that produces blood and severe weight loss. When this disease becomes chronic, it often looks a lot like tuberculosis.

The most severe version of the disease, disseminated histoplasmosis, affects just about any part of your body, including your central nervous system, liver, mouth, skin, and adrenal glands.

If you are exposed to any kind of bat or bird droppings and you have a weakened immune system, be aware of these symptoms. Head to the doctor’s immediately.

Histoplasmosis can cause serious complications even in otherwise healthy people, but in people who already have compromised immune systems, the result of this disease can be devastating. Severe complications include heart problems, adrenal insufficiency, meningitis, and acute respiratory distress syndrome.

To figure out if you have histoplasmosis, a doctor will take samples of your urine, blood, biopsied lung tissue, bone marrow, or lung secretions.

Often, treatment is not necessary if you only have a mild case. You’ll just have to let it run its course. However, if your symptoms are severe – or if it becomes chronic or disseminated – you will need to seek treatment with antifungal drugs. These often need to be taken up to a year to be fully effective.

How to Prevent Histoplasmosis

Hopefully, this article hasn’t scared you – but instead enlightened you on the dangers of histoplasmosis. Ready to learn how you can keep yourself safe?
Avoid or Reduce Exposure

This one is perhaps one of the most difficult, as it’s impractical for people who keep chickens. Many doctors will recommend staying out of chicken coops if you have a weakened immune system. If that’s not a possibility, consider wearing a respirator mask to protect you from exposure to the spores.

You can also wear gloves and coveralls to keep yourself protected.
Spray Surfaces Down

Before you head out to work in the chicken coop (like to clean it), spray it down with water. This will weigh down the spores and prevent them from being released into the air.

There are plenty of reasons to practice proper spacing and good housing practices when it comes to your chicken coop. Not only can this help your coop stay cleaner for longer, but it can prevent a variety of diseases.

Histoplasmosis is one of them. Make sure your chickens are not overcrowded (and, just as importantly, make sure they aren’t overstressed). Good management practices are key to helping to keep your chickens (and you!) healthy.

Change Your Clothes and Wash Your Hands

After cleaning the coop, you may want to change your clothes. This can reduce your likelihood of being exposed to the spores on your garments. You should also wash your hands after handling things in the chicken coop that have been on the ground, like feeders and waterers.

You aren’t as likely to contract it from collecting eggs, but it’s a good rule of thumb to wash your hands after any of these activities regardless.

Take Caution in the Garden

Something else to note is that wild birds can spread histoplasmosis. It can be contracted when you dig in the soil. Make sure you wash your hands and ideally shower after working in your garden, too.

Wild birds can spread the spores of histoplasmosis just as easily as chickens can. They can carry the spore son thief reet, wings, and beaks of birds. They can then infect soil under piles of manure or near roosting sites. Blackbirds are particularly problematic when it comes to spreading the disease.

Do your best to limit the amount of contact that your chickens have with wild birds. You may need to put up spike strips or some other barrier so they can’t roost or perch atop your chicken coop.

Make sure they can’t get into your chickens’ food, too, by placing it in automatic, covered feeders and cleaning up any spilled grain promptly.

Keep an eye out for bats, too. Although bats can be helpful when it comes to eliminating mosquito and other pest populations, you don’t want them hanging around the house, garden, or chicken coop too much.

Open Up Doors and Windows

A well-ventilated coop is a healthier coop, and it can also prevent the spread of histoplasmosis. Make sure your ventilation is up to par at all times, but especially when you’re cleaning. Open up the doors and windows to reduce your exposure to the spores.

Don’t Use Dirt As Bedding

Many scientists believe that a chicken coop bedded with dirt or sand (or those that simply have dirt floors) are more likely to be contaminated by Histoplasmosis fungus. Therefore, you should use some other kind of bedding, like shredded paper or straw, to keep your chickens comfortable.

Another benefit of skipping the dirt floor bedding is that the coop will be easier to clean without stirring up dust in the air around you.

Can My Chickens Get Sick from Histoplasmosis?

The true irony of histoplasmosis is that while it can make you really sick and is spread in chicken droppings, it won’t actually get your chickens sick.

The organism thrives in moderate temperatures and moist environments, but birds can’t be infected because they have high body temperatures. In addition to carrying the spores in their droppings, they can also carry them on their feathers.

It’s important to note that bats are other creatures that can be infected because they have a lower body temperature.

Ultimately, although your chickens can’t get sick from histoplasmosis, you can – so it’s vital that you take the necessary precaution to protect yourself from this disease. As always, good sanitation and proper animal husbandry practices will go a long way in keeping you and your animals safe!

"Hi! I'm Kendra. I'm a wife, mother, and homesteader. I love everything that has to do with simple living. I'm a canning instructor, an avid gardener, and a constant learner of old-fashioned skills. Here is where I share it all. Welcome to the adventure!"
New Hampshire Chicken: Everything You Need to Know
So, Can Chickens Eat Hay and Haylage?
So, Can Chickens Eat Moss?
So How Many Chickens Can Fit in a Tractor?
How To Trim Rooster Spurs