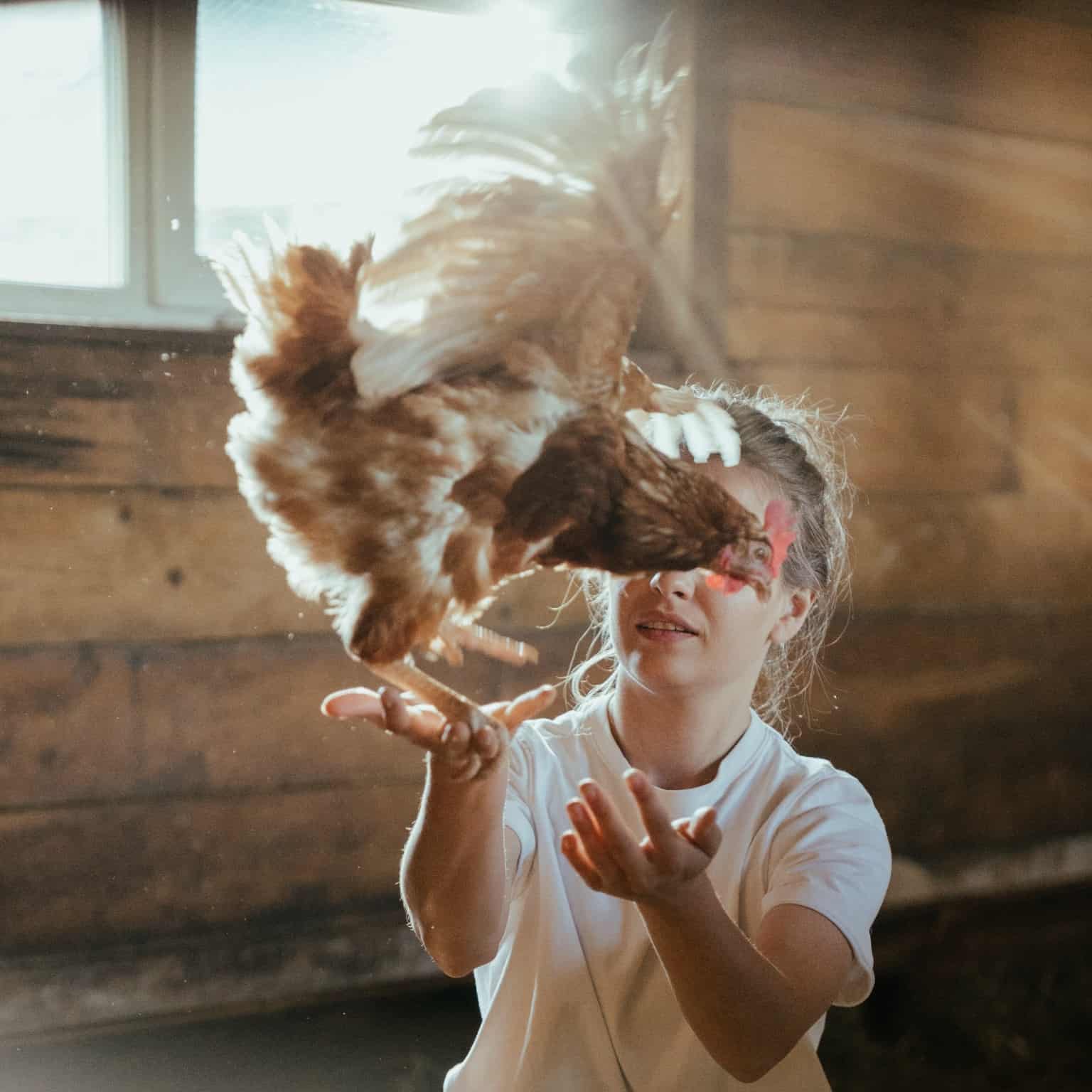 Chickens, despite being the most common domesticated birds found around the world, still have a few mysteries about them.

Namely, there seems to be a considerable amount of disagreement concerning whether or not they can actually fly.

Some keepers report that their birds never really leave the ground, while others have been surprised to find their chickens on top of the coop or even on top of their own roof or roosting in trees.

So what’s the deal? Can chickens really fly or not?

Yes, most chickens are capable of flight, but only limited flight. Lighter, smaller breeds tend to be more capable, while heavier breeds can barely fly (if they can fly at all).

And that’s the bottom line, but what is most surprising is just how much variation there is in the flight capabilities of chickens, sometimes even within the same breed.

As you might expect, this is something that you will definitely need to know about if you’re going to keep chickens of your own, and their flight capabilities, or lack thereof, can greatly impact how you look after them. This article will tell you more.

Most Domestic Chickens Can Fly, Sort Of

Now, most people don’t think of chickens as being flight-capable but the reverse is actually true if in a limited way.

Most domestic chickens can use their wings for short flights, usually in the form of a flapping “hop” to reach a higher vantage point or cover a lot of ground quickly.

But that being said, chickens are indeed pitiful flyers compared to most other birds, and wild jungle fowl (their closest wild ancestors) in particular.

Most chickens cannot remain airborne for longer than a few seconds, unless they get a running start and are heading down a steep slope.

As you might expect, the lighter breeds of the domestic chickens we keep today are the ones that fly the best.

This is because they usually maintain the best power-to-weight ratio compared to larger breeds, even if their typical flight characteristics are degraded from their wild cousins.

You’ll come across warnings of these breeds, too, if you take the time to look up flighty breeds on chicken forms, in guide books, and at expos.

Breeds like the Minorca and Speckled Sussex are known to be very capable flyers, and difficult to contain if you don’t have a covering on their run.

Also keep an eye out for cautions regarding a breed’s propensity for roosting in trees, breaking out of chicken runs, hopping fences, and the like.

Chickens don’t climb well assuming they cannot jump and flap their way up there, so any breeds that are known for getting up high will typically be pretty good flyers!

Heavier Breeds Don’t Fly Well or At All

But then you have chickens on the opposite end of the spectrum, the ones that can only attempt a poor mockery of flight or else the birds that don’t even try to fly.

Breeds of this nature are usually too big and heavy, or else have irregular musculature that does not lend itself well to flight.

Though it is true these birds might be able to get a couple of feet off the ground they are rarely able to clear fences.

Broadly speaking, any of your true large breed chickens like Leghorns and Rhode Island Reds, and any specialty breed that was created for massive meat production will be completely unable to fly.

Some Breeds No Longer Have the Feathers for Flying

There are also a few breeds that one might think would be capable of flight, or even good flyers, that cannot fly at all.

Most of your chickens that have fluffy feathers, like Silkies, cannot fly because the feathers do not generate the necessary lift.

Other unexpected breeds, like most bantams, don’t have the strength to fly even though they are certainly small and light enough.

Other breeds, as mentioned above, have simply moved away from their ancestral lineage enough that the muscles and other anatomy needed for flight have changed too much to support it, or else these birds no longer have the endurance required for the task.

Any Chicken with Clipped Wings Won’t Be Able to Fly

It isn’t always a matter of size and weight or genetics that determines if a chicken can or cannot fly.

Many keepers seek to eliminate the possibility altogether by taking matters into their own hands, literally, and clipping the wings of their chickens.

Contrary to what the name suggests, clipping the wings of a chicken, or any bird, does not hurt the animal or mutilate it when done properly.

The process is only a matter of snipping off a length of the primary flight feathers on one or both wings, thereby greatly reducing or completely eliminating a chicken’s ability to fly.

They might try to fly even after having their wings clipped, and this is not a pretty sight, but they quickly get the picture that flight is no longer on the table.

Some chickens that have their wings clipped regularly and for long enough are even known to give up on trying to fly when their flight feathers are allowed to regrow.

And that brings us to the last point that keepers will have to keep in mind if clipping wings, because the feathers do grow back, so too will the chickens’ ability to fly!

This is a chore you’ll have to stay on top of if you want to keep your chickens where you want them, assuming they could fly in the first place.

If Your Chickens Can Fly, When Will They?

So we have determined that your chickens can probably fly well enough to cause headaches, and you’ll have to plan for this eventuality. Now we need to know what will cause them to fly in the first place!

Chickens will fly for a variety of reasons, with the most mundane being that they simply want to get to a higher vantage point.

Chickens, like most birds, prefer to be up off the ground when they are resting and roosters in particular want a good field of view to keep an eye out for approaching predators.

When it is time for your chickens to rest or settle down for the night, watch for them to try and fly up to a high branch, the roof of your house, and other spots.

Another reason chickens will fly is when they want to escape danger or just perceived danger.

A sudden burst of movement at close range will usually send your whole flock into a flapping commotion, as will the presence of any predator that they detect.

This is instinctive behavior, and even chickens that cannot fly, and to know that they cannot fly, will flap their wings as they try to run away.

Lastly, chickens may take to wing when trying to chase down prey, be it an insect or something else.

Chickens are predators in their own way and have no reservations about using speed and maneuverability to get their next meal.

This behavior is especially common when they are allowed to free range and have room to maneuver.

"Hi! I'm Kendra. I'm a wife, mother, and homesteader. I love everything that has to do with simple living. I'm a canning instructor, an avid gardener, and a constant learner of old-fashioned skills. Here is where I share it all. Welcome to the adventure!"
So, Can Chickens Eat Zinnias?
The Top 10 Quiet Chicken Breeds You Should Raise
So, Can Chickens Eat Apples?
How and When to Help a Stuck Chick Hatch From Its Egg
Finding Free Range Eggs