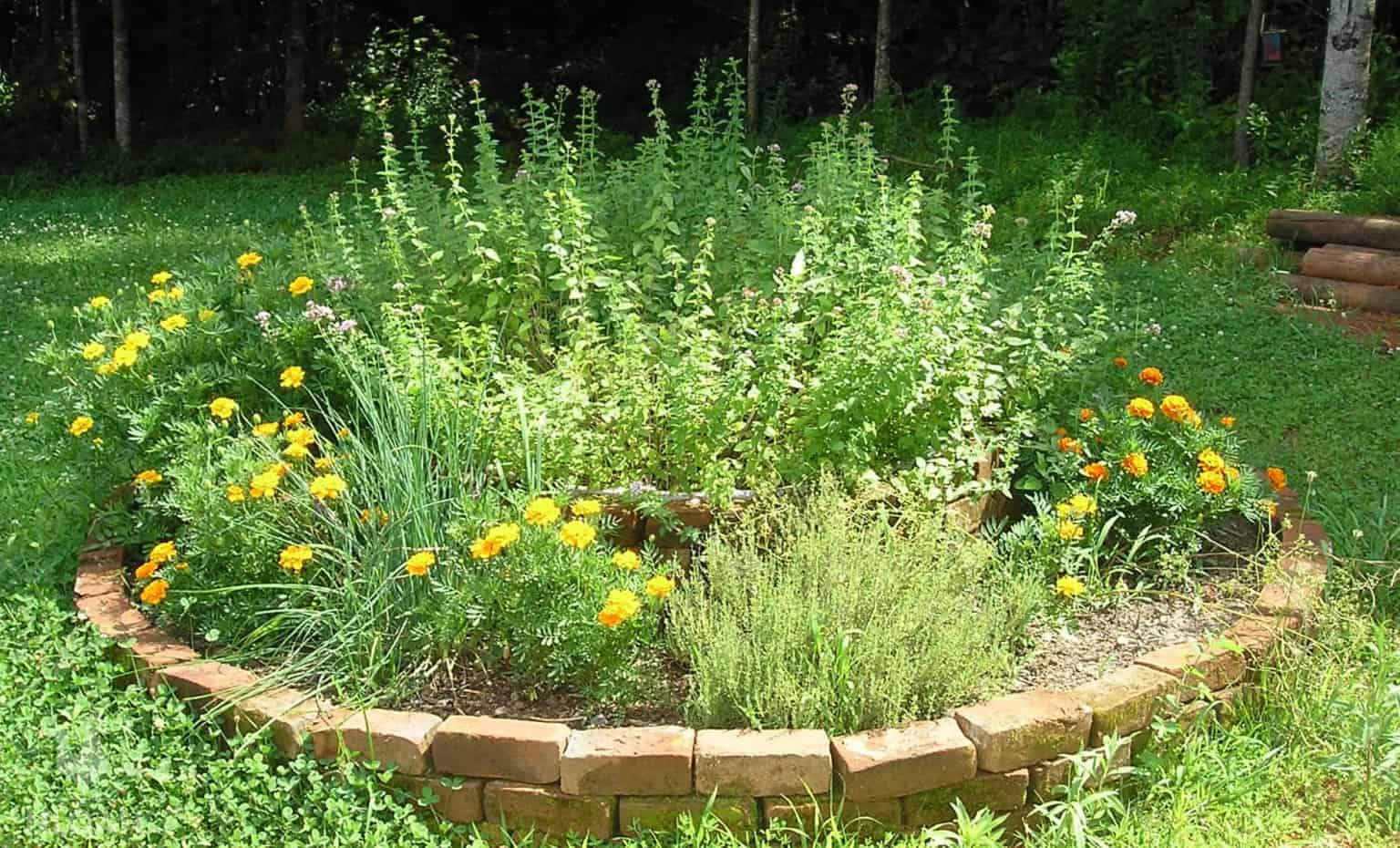 I can’t tell you how pleased I was today to finish the herb bed I’ve been working on for the past few days. Love it!

Since we’ve been building bigger raised veggie beds, I ended up having to move the little circle of herbs I had growing smack in the middle of the garden. It was mostly oregano anyways, so I didn’t mind uprooting the thing and transplanting it elsewhere.

And actually, I had had a stroke of genius the other day as I was loading up a trailer full of junk to take to the dump. I came across a commercial sized box fan from my husband’s old warehouse.

All of the parts were stripped out, so it was just a large, metal circle. And when I saw it, I immediately thought- raised bed! I didn’t really know where I would put it, but I knew it must be saved.

Then the pieces all fell together as I decided where I’d move my herbs. I knew I wanted a circle bed. I found a place in my yard where I thought it would look nice. But I needed a way to keep my oregano separate from the other herbs I’ll be planting.

You see, I didn’t realize this when I made my first herb bed, but oregano spreads like CRAZY, and it will absolutely choke out everything you try to grow alongside it. It needs boundaries.

And then I had my ah-ha! The metal fan box!

I’ll surround it with some of the old bricks that have fallen off of the chimney in our woods, and it’ll make the perfect raised herb bed to keep my oregano separate from everything else.

I wasn’t sure I’d have enough hand-made bricks to build it up the way I envisioned, but I took a shovel into the woods, and began digging up as many of the old bricks as I could find in one piece around the old homesite.

Here’s how it looks about 120 bricks into the project. I made it 8 ft. across. The tricky part was finding bricks that weren’t broken in half.

Once I had my three layers of brick, I moved the metal thing out of the middle, covered the ground with cardboard to suppress the weeds, put the metal thing back in the center of the bed, and started filling it up with dirt.

When the outer ring was filled with dirt, I collected more bricks and stacked them around the center to cover the metal box. Then I filled in the middle, and stuck a planter in the very top.

I had Jada sit in the picture so you can get an idea of the scale of the bed. It was a little tricky stacking the bricks evenly. Since they are hand-made bricks, they aren’t all perfectly uniform. I loved the moss growing on them, though. I think it gives the bed a nice rustic touch.

Toward the end of the project, I got desperate for whole bricks and started taking them from their places around some of our fruit trees (as you may have noticed from the tree in the background as the photos have progressed)

Eventually, I ended up having to incorporate broken bricks. There are right at about 200 (whole) bricks here. I carried almost all of them out of the woods five at a time.

I was able to get some good sized clumps of oregano transplanted before the sun went down on me today:

I’m so anxious to fill her up with lots more herbs and flowers!

Yay for being done with the hard part! And all it cost me was time and a little work.

So… what do you think I ought to plant in the pot? I’m thinking cascading flowers of some type. And maybe plant little purple flowers around the outside perimeter as well. What would you do?

Update 1: Here’s the herb bed, still mostly dormant. I planted strawberries in there this week, for lack of a better place to put them. The oregano is just starting to emerge.

The chives are always the first thing to come to life in early Spring. I noticed a little parsley coming back as well. I’m anxious to see which herbs will present themselves again this year.

Update 2: Here’s how my bed’s looking as of today. I’ve planted some thyme, cilantro, chives, pot marigolds (calendula), cherry tomatoes, oregano, and a bay tree in the pot. Still lots of room for more:

If I can keep the dumb cat from using it as a litter box, we’ll be good.

Update #2: The herbs and flowers have really taken off! I’ve harvested a TON of oregano already. I’ve added St. John’s Wort, Basil, and Lavender to the herbs here. Guess I need to mow soon, huh?

34 thoughts on “Raised Bed from Reclaimed Brick to Grow Herbs”