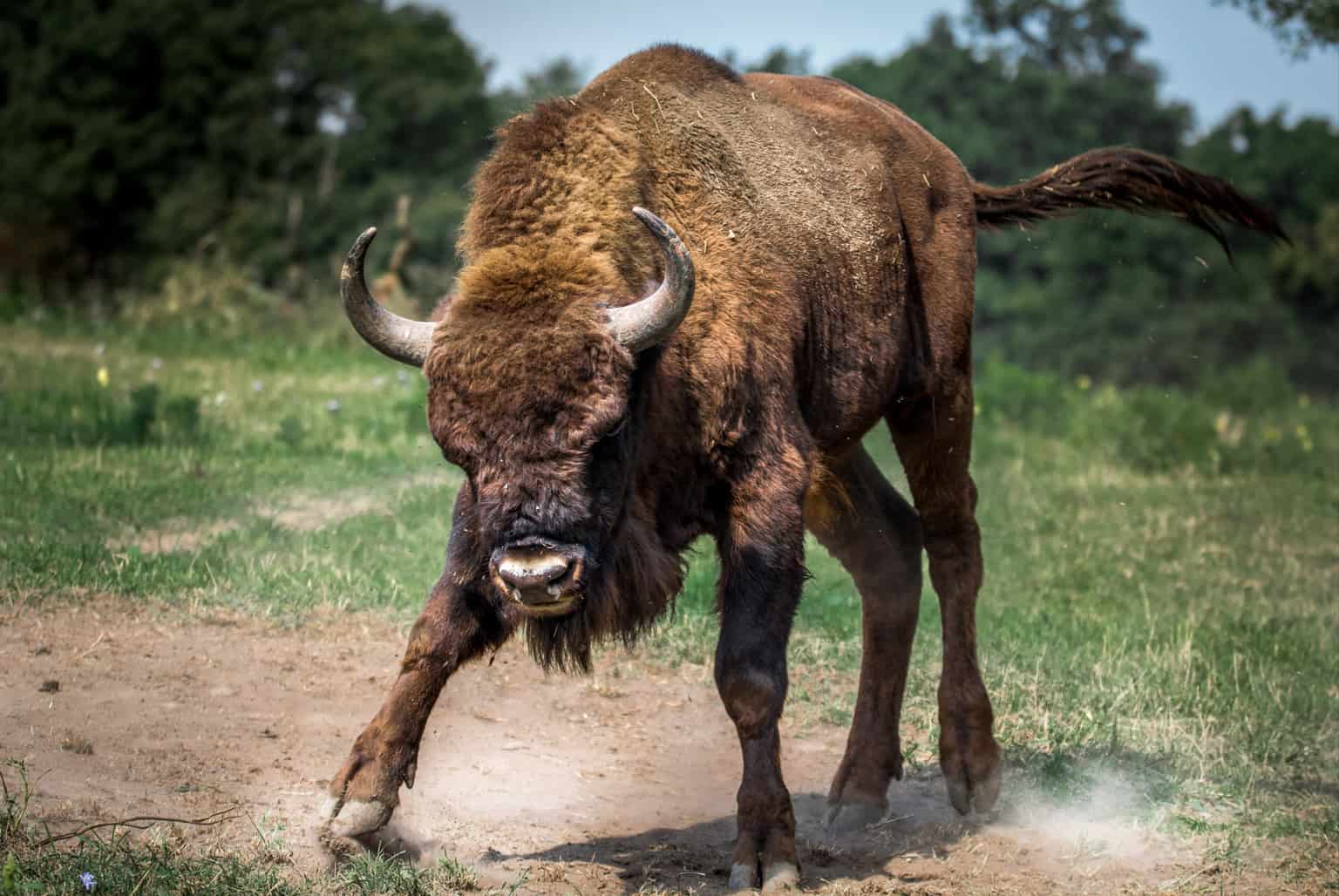 Bison is one of the largest and most impressive mammals in North America. Iconic, majestic, and traveling the countryside in immense herds, these shaggy bovines are making a big comeback since their numbers were depleted to near extinction by overhunting.

In fact, the American bison is one of several reasons why many tourists throng to the national parks of the U.S. interior.

With so many people literally lining up to see and photograph these great beasts, close encounters are inevitable. This begs the question: Are bison dangerous?

Yes, the American bison can be extremely dangerous. They can weigh up to a ton, are fast, agile, and equipped with sharp horns to gore with. When startled or approached, a bison can quickly charge, slam, and trample a person before they can get to safety. You must always treat bison with respect and maintain a safe distance from them.

They may look fuzzy and placid, but these giant animals are no joke, and you’ll underestimate them at your peril.

In this article, we will explore what makes bison so dangerous, and what you can do to avoid and survive an attack by one.

Characteristics of the American Bison

Though bears get most of the limelight as the largest predators on land, it is actually the American bison that is the largest land mammal in North America.

Standing up to six feet tall at the shoulder and weighing close to a ton, these animals are truly massive.

Bison is also fast, with the ability to run up to 35 miles per hour, a speed they can sustain for miles on flat land. They are surprisingly agile for their tremendous size, able to stop and turn quickly from a dead run.

Mature males and females both have lengthy, sharp horns that they use for defensive purposes. They are not just for looks!

Despite their massive physique and impressive weapons, bison are herbivores and primarily graze on grasses.

In the winter months, when grasses are dormant, they will supplement their diet with twigs, bark, and other plant matter. Bison live in herds composed of related females and their offspring.

Bulls will generally live apart from females and young in herds of their own, except in the spring and summer breeding seasons. At that time, bulls will aggressively compete for access to cows in order to mate.

Historic and Present-Day Habitat of the American Bison

The American bison once roamed the grassy plains of North America in massive herds numbering in the millions.

They were an important source of food and shelter for many Native American tribes, and their hides were used to make clothing, tools, and other items.

However, by the late 1800s, overhunting had reduced the population of bison to just a few hundred animals.

Thanks to conservation efforts, their numbers have rebounded somewhat and there are now an estimated 500,000 bison in North America.

While they no longer roam freely across the continent as they once did, bison still inhabit a number of national parks and other protected areas in the United States.

This recovery is indeed a cause for celebration, but it also means your chances of encountering bison in the wild, expected or not, are increasing every year. And that means you must know what to do should you be attacked by one!

Bison are Statistically More Dangerous than Bears or Wolves

While any wild animal can be dangerous if provoked, some animals are more likely to attack humans than others, and more likely to inflict great bodily injury or death when they do!

In North America, among large mammals it is the bison, not the bear or wolf, that is responsible for the most attacks on humans, and the most serious injuries.

And it is bison that are by far the most dangerous. Data from Yellowstone National Park shows that between 1980 and 2000 there were seven fatalities caused by bison attacks and many more serious and non-serious injuries.

In addition to being more deadly on a per-instance basis, bison attacks are also much more common than attacks by other animals in the same area.

This is likely due to the greater numbers of bison, and their seemingly peaceful nature; it is possible that at least some victims just don’t realize they’re in danger until it’s too late.

While bison are generally peaceful animals, they can be aggressive when threatened or startled, especially when with young.

When a bison feels threatened, it will usually first try to scare off the perceived threat by bellowing loudly, shaking its head, stomping its hooves, and raising its tail. If this doesn’t work, the next step is a false (or legitimate!) charge.

A full-grown bull can accelerate to top speed in seconds, covering up to 25 feet per second when charging, and can maintain that pace for miles over even ground.

There is no way you will outrun one, and don’t think you can just dodge at the last second; bison corner and turn easily and can hook you with its horns before tossing you into the air.

And, sometimes, bison seem to trigger for no reason and with no perceivable warning at all. These are still wild animals, and their actions cannot be predicted with certainty.

How to Avoid an Attack by a Bison

The best defense against a bison attack is to prevent one in the first place. Avoiding a bison attack entirely is possible if you give them a wide, wide berth, as with any large and powerful animal.

First and foremost, stay alert and be aware of your surroundings when you are in areas where bison may be present. These giants are surprisingly quiet when moving.

Pay attention to signs and posted warnings, and heed any advice given by park rangers or other officials.

If you see a bison in the distance, do not approach it; give it plenty of space to continue on its way. If you find yourself between a bison and its destination, move away quickly but calmly.

Never turn your back on a bison or startle one; they have been known to chase people for long distances.

Lastly, don’t become complacent: even “tame” bison seen congregating near photo ops and near cars on roads are dangerous. These are large, wild animals, and should always be treated with caution and respect.

What to Do if You’re Attacked by a Bison

If a bison is displaying defensive indicators or acting aggressively, you need to act quickly and correctly.

The best thing to do is stay calm, and try to move away smoothly, but quickly, and directly away from the bison. Don’t turn your back on the bison or run away if the animal isn’t charging yet.

If it’s possible, get behind a large tree or other heavy objects that will block the bison’s approach. A large vehicle is okay, smaller ones less so.

If you have time and opportunity, climb atop a sturdy object or tree that the bison cannot knock over or reach you on; they cannot climb.

If a bison does charge and you have nowhere to go, crouch down and protect your head and neck. Do what you can to avoid the bison’s horns.

Bison are likely to slam you a few times or toss you in the air before departing. The sooner they perceive you as no longer a threat the sooner they will halt the attack.

In any case, always seek medical attention if you or someone else has been attacked by a bison.

These animals are massively powerful, and it is possible that the effects of adrenaline could be clouding your judgment when it comes to serious internal injuries.

"Hi! I'm Kendra. I'm a wife, mother, and homesteader. I love everything that has to do with simple living. I'm a canning instructor, an avid gardener, and a constant learner of old-fashioned skills. Here is where I share it all. Welcome to the adventure!"
Is It Worth It To Raise Hogs For Meat?
Goat Bloat: Quick Fixes and Prevention
Raising Pheasants For Meat on the Homestead
You Won't Believe It: How To Catch A Pig
Attracting Bluebirds To Your Garden for Natural Pest Control