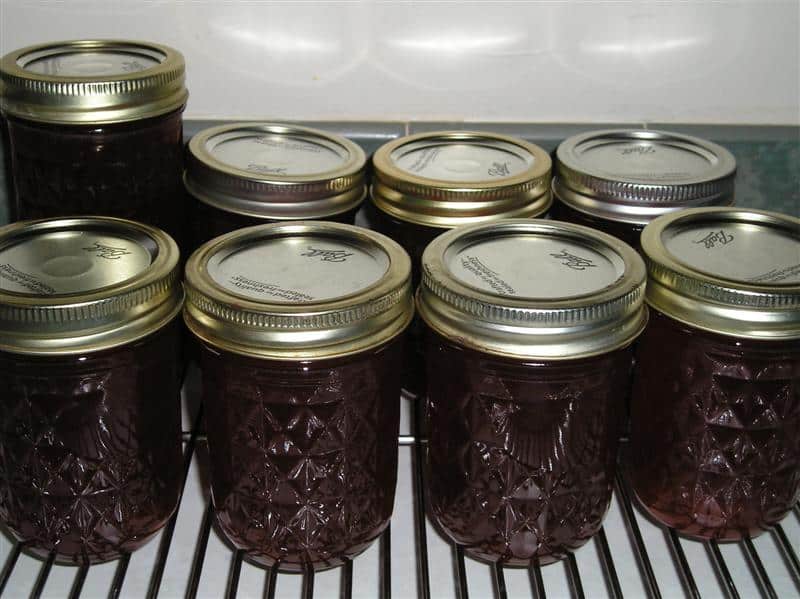 Last night I felt like experimenting. I had about six cups of fresh apple juice I’d made from some Galas that were given to us, which was enough to make apple jelly with, but I also had 3 cups of pear juice which wasn’t enough to do anything with by itself. So, I decided to mix the two together and see how it would turn out.

First, I searched all over the internet and in my books for a recipe for apple-pear jelly, but I could not find a single one! I found some jams which mixed the two, but I had juice to work with, not whole fruits, so that wouldn’t work. I decided I’d just wing it. Hey, what’s the worst that could happen?

The pear juice I’d made was from leftover peels and cores I had from canning a bunch of Bartlett pears. I just put them into a large pot and filled it with water about two-thirds of the way up the peels.

I then simmered them over low-med heat until everything was all mushy. After straining the mix through a cheese cloth, I was left with about three cups of juice.

Here’s how I made the Apple Pear Jelly:

Then I added 4 Tbsp and 1 tsp of lemon juice to the mix. (2 Tbsp lemon juice for every 4 cups of juice, and again a little more for the extra cup of juice I had).

I brought it all to a boil, and let it cook until it looked like it was to the gelling point. I didn’t do the spoon test. It was sticking to the stirring spoon pretty well, so I figured it was getting close.

Next, I poured the hot jelly into hot, sterilized jelly jars, leaving 1/4″ headspace. I screwed on the hot, clean lids and put the finished jars upside down to cool on a rack.

There was enough extra jelly in the pot that I could put some into a jar to refrigerate right away. I tried it this morning, it’s good!! The consistency is funny though. It’s actually exactly like honey, very sticky and somewhat runny. It’s really good though; sweet like honey too. It’ll go great on breakfast biscuits. Oooh, I bet mixing it with butter like honey butter would be divine! I’ll have to try that.

I’d debated on adding pectin to the mix. Perhaps that would have allowed it to gel better. Anyways, I’m happy with the results!

"Hi! I'm Kendra. I'm a wife, mother, and homesteader. I love everything that has to do with simple living. I'm a canning instructor, an avid gardener, and a constant learner of old-fashioned skills. Here is where I share it all. Welcome to the adventure!"
How to Can Food at Home - Start Here
Cranberry Walnut Conserve Step by Step
How to Can the Best Grape Jelly
How To Can Venison
How To Can Pears (Halved or Sliced)