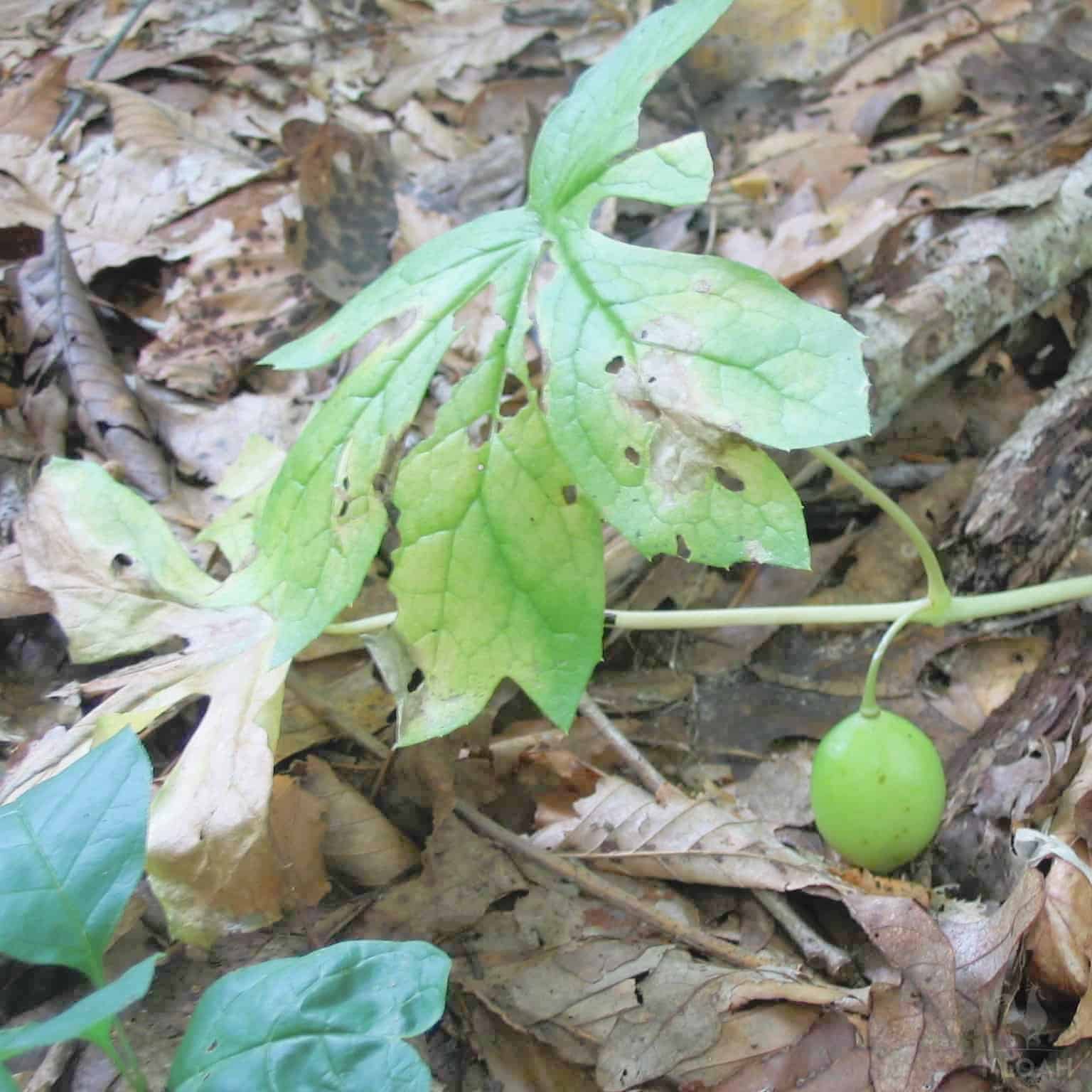 Recently, I went on a walk in the woods near my house, and I was delighted with what I found.

I had read extensively about them but wasn’t aware that I was lucky enough to have some growing right in my own slice of property.

Dense, green foliage. Not a flower, not a fern. Not a mushroom, nor a tree. Six to eight leaves, splotched or solid green… And a delicious, tantalizing smell and taste.

So what are these mysterious plants I’m referring to?

With this revelation, I took another trip into the woods to examine the plants a little closer. I gasped with excitement when I discovered that some of the plants already have flower buds forming. They were almost ready to set fruit!

Are you interested in learning more about what these delicious little plants are – and how to find them? Keep reading to learn more!

What Exactly Are Mayapples?

Mayapples are a type of fruit that belongs to the genus Podophyllum. They are native to North America and can be found growing in woods, meadows, and open woodlands. Mayapples are typically about the size of a ping-pong ball and have a yellowish-green color.

The flesh of the fruit is edible, but it contains a small amount of toxin. Therefore, it is important to eat Mayapples in moderation, and avoid consuming the seeds or rind.

Although Mayapples are not very abundant, they are considered to be a valuable source of nutrition due to their high vitamin C content. When eaten raw, Mayapples can help boost the immune system and protect against various diseases.

Mayapples are a popular ingredient in fruit smoothies and jellies.

How to Identify Mayapples

Mayapples (Podophyllum peltatum) are easily recognizable herbaceous plants that are native to woodlands in the eastern United States. These unique plants can be identified by their single leaves which are attached to long stems.

Mayapples also have a small stem in the center of the leaf which bears a solitary white or rose-colored flower:

In late spring, this flower will develop into a large, greenish-yellow fruit.

Mayapples are typically found growing in shady areas with moist soil. Although the fruits of this plant are edible, they should not be eaten raw as they may cause stomach upset. When ripe, the fruits can be used in pies or preserves.

As the fruit ripens, the umbrella shaped leaf dies away, leaving only a stem and a dangling fruit. I read that it can be hard to find them because by then the other plants have grown up around them, hiding the fruit from plain view. The forest will smell like lemons when it’s full of ready-to-pick Mayapples.

Some suggest that it’s easiest to just follow your nose to find them. I’m thinking I might cover a few with a wire cage before they go into hiding, so that I might just beat the squirrels to at least one or two fruits.

Where to Find Mayapples

Mayapples are beautiful, unique plants that can be found in woods all across North America.

These plants prefer moist soil and dappled shade, so they are often found along paths or in areas where the tree canopy allows some sunlight to reach the ground. Mayapples typically grow in colonies.

If you’re interested in finding Mayapples, they can be found from Texas all the way to Nebraska,mayapple and from the East Coast to Canada.

Keep an eye out for these special plants the next time you’re exploring a forest!

When and How to Harvest Them

Mayapples are a delicate, woodland fruit, and harvesting them requires a light touch and patience. These lovely yellow fruits will be ripe for picking around June.

The mayapple’s short growing season means that you must act quickly to beat the forest critters to the harvest. Once picked, the mayapple can be eaten fresh or used in jams and jellies.

Be sure to save some of the seeds so you can plant them next year and enjoy another crop of these delicate fruits.

What Part of the Mayapple Plant is Edible?

The Mayapple fruit is edible and can be used in pies and jams, or simply eaten raw. The Mayapple root is also edible, but must be cooked before consumption.

The root can be used to make a variety of different dishes, including soups and stews. In addition to its culinary uses, the Mayapple plant has a long history of medicinal use. The root was traditionally used to treat various ailments, such as colds and flu.

Today, the root is still used in some traditional medicine practices. It is also used in the manufacture of two cancer drugs, etoposide and teniposide.

On the other hand, the leaves and stems are poisonous, so definitely don’t eat those…

Can You Eat Mayapple Raw?

Although the fruit is technically edible, it is not recommended to eat mayapple raw due to its unpleasantly tart taste.

When ripe, the mayapple can be used to make jams, jellies, and pies. It can also be dried and powdered to make a tea.

Mayapple tea is said to have numerous health benefits, including easing stomach pain and boosting the immune system. In addition, the root of the mayapple plant can be used to make a topical ointment that is effective in treating various skin conditions.

Mayapples have a tart and tangy taste that is similar to citrus fruits.

They are sometimes likened to bananas, but with a hint of lemon. Others say they taste like a cross between an orange and a grapefruit. Whatever the exact flavor, there is no doubt that mayapples are delicious.

They can be eaten fresh, baked into muffins or used in any recipe that calls for banana, pumpkin or zucchini.

They are often used in jams and jellies, as well as pies and other desserts. Mayapples can also be eaten raw, but they are quite sour and many people find them to be unpalatable.

The best way to enjoy mayapples is to add them to recipes where their tart flavor can balance out sweeter ingredients.

I took a walk into the woods this morning, to check on the progress of the Mayapple fruits. They’re still green and hard, not even close to being ready to harvest. I’ll keep checking back with the hopes of collecting at least one ripe fruit to sample.

I am not an expert forager, so please do not take my word for it. Always do your research and be 100% sure you have properly identified a plant before consuming wild edibles.

There are many poisonous plants and plant parts to be aware of, so never be nonchalant about what you pick and put in your mouth.

Do you have Mayapples growing nearby? Have you had a chance to taste them?

"Hi! I'm Kendra. I'm a wife, mother, and homesteader. I love everything that has to do with simple living. I'm a canning instructor, an avid gardener, and a constant learner of old-fashioned skills. Here is where I share it all. Welcome to the adventure!"
Foraging for and Using Milkweed
Foraging and Using Sow Thistle
Is Lady's Thumb Edible?
Lady’s Thumb Weed: Edibility, Safety, and More
So, Are Juniper Berries Poisonous?