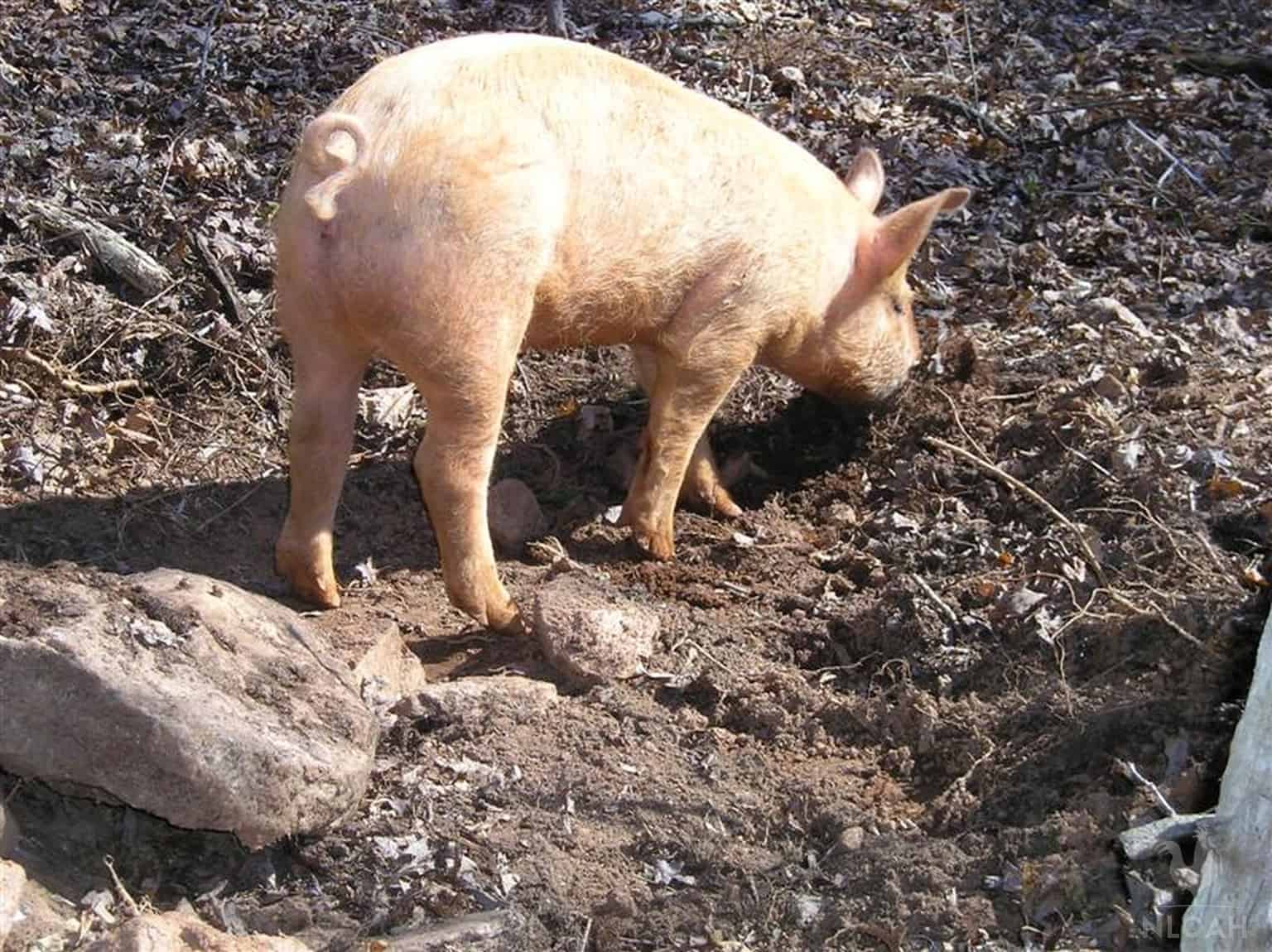 Before owning a pig, I had no idea they had so many names! A pig was just a pig. But then I started hearing people calling them different things, and I hadn’t a clue what they meant. This is for all of you, city slickers…

What is a swine?

The term swine is used to refer to any member of the pig family.

What’s the difference between a Hog and a Pig?

What are baby pigs called?

(Aw, com’mon! I know you know that much!) Piglets, of course!

What is a female pig called?

A: A female pig is called a gilt until she has her first litter of piglets, and then she is called a sow, no matter her age.

What is a male pig called?

What is a feeder pig?

A feeder pig is a gilt or barrow which has been weaned, and is sold to be raised for slaughter. It is between 6-8 weeks old, and should weigh between 40-80 pounds.

What is a grower pig?

A grower pig is a swine weighing between 40-125 pounds.

What is a finisher pig?

A finisher pig is a swine which has reached market weight, 125 pounds to about 230 pounds.

There are of course other names for pigs, and some of them that are not so serious, basically nicknames. Others are colloquial terms used to describe certain kinds of pigs or pigs at varying stages of growth as above.

In any case, more than most other animals pigs have lots and lots of names! Here are a few more.

A shoat is a young pig, particularly one that is freshly weaned. Most keepers technically consider them no longer true piglets at this stage, as they are growing rapidly and their behavioral characteristics will change just as quickly compared to when they are newborn and very small.

This is a nickname, and it’s origin should be pretty obvious. Pigs are notorious for grunting pretty much all the time no matter what they’re doing,and sometimes even grunt when they are sleeping! This is also a popular nickname for a pig with a particularly nasty disposition.

Like grunter, the origin of this nickname should be obvious. Oinker is derived from the onomatopoeia of the typical sound that pigs make, or rather the sound that we are taught they make since we are very young.

I can’t say that I’ve ever heard a pig make a true “oink” before, but you have to admit the name is pretty catchy.

Cutter is another colloquial term used to describe a pig’s stage of growth, and specifically pigs that are being raised for their meat. Although not used everywhere, cutter denotes a pig that is currently between pork and bacon weight.

I don’t care who you are, the very best product to come out of a pig is its bacon, bar none. Accordingly it makes sense to give pigs a nickname based on this obvious fact, so referring to an entire pig or even a herd of pigs as bacon is not too far from the truth.

Here piggy, piggy, piggy! A cute nickname or term of endearment for a preferred or possibly pet pig. Not guaranteed to actually lure pigs to you.

A nickname commonly used to refer to pigs that are destined for slaughter at pork weight, or a larger pig in general.

Another legendary nickname for a pig, derived from Porky Pig, one of the most famous and longest running of the classic Looney Tunes characters. T-t-t-t-that’s all it means, folks!

Pigs, when distressed, in pain or frightened will often emit repeated, ear piercing squeals. That’s the source of this nickname. It can also refer to a pig with a nervous or dramatic disposition that is prone to making such sounds.

A peccary is another name for a javelina, an animal that closely resembles but is distinct from a true pig. In some parts of the United States, particularly the Midwest and Southwest, this term is used as a catch-all reference to pigs of all kinds even though it isn’t strictly accurate.

Cob roller is an odd nickname for pigs, and one with a disputed history. Some folks say that it derives from a pig’s tendency to roll easily on the ground or down a hill when lying prone, akin to a corn cob.

Others say the term was actually derived from the fact that pigs will roll around corn cobs as they root and bite at them. In any case, this is an odd but interesting nickname for a pig.

This term is particularly common in Arkansas and neighboring states. It is also sometimes used as a reference to any particularly vicious and aggressive wild pig, often a male.

A warthog is a specific breed of wild pig found in Africa, although it is sometimes used to refer to any wild pig and especially ones with large and prominent teeth. Sometimes a large, dominant and surely domestic male pig is said to be a warthog.

There. Don’t you feel smarter now?

16 thoughts on “The Different Names For Pigs”