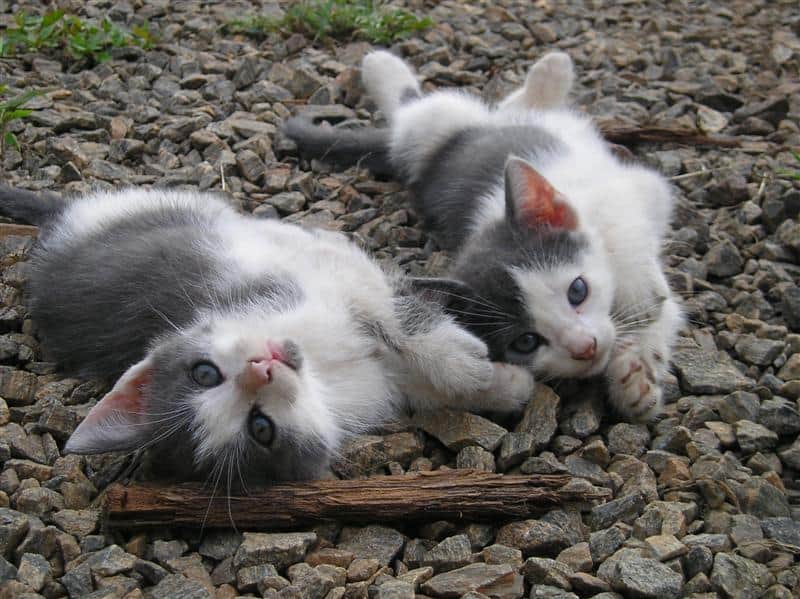 A few months ago, a friend gave us a kitten. Not that we needed one, but the sweet little thing couldn’t be friendlier, and had already proven to be a good mouser. She was a stray, and needed a home. So we took her.

About five weeks after we brought her home, we noticed her belly looked awfully swollen. We thought maybe she had worms, so we wormed her. But there was no difference in her appearance.

A week later, my friend who is a midwife came over. As she came to the back door she noticed my kitten. “Oh, your cat’s pregnant!” she exclaimed. Surprised and very doubtful I replied, “Oh no, she can’t be pregnant. She’s just a kitten. There’s no way!”

But my friend knelt down and felt the cat’s stomach. “Yep. She’s pregnant all right. If I had my doppler we could hear the heartbeats.” She was positive my kitten was going to have kittens. Could it be possible?

Two days later, sure enough, we discovered the cat having kittens in a cardboard box. Four were born, three survived.

Great. Like we needed more kittens… Although, they were super cute. And the kids were thrilled to have them.

Well, several weeks passed and all was well. Until we noticed that something was wrong with the little gray kitten. There was a hole in his chest. A good sized puncture, that looked to be oozing with white puss.

We couldn’t figure out how that could have happened. Had he fallen on something? I was sure it wasn’t there when he was born.

Other than the wound, he acted perfectly fine and played happily with his siblings. But I knew I couldn’t just leave it to fester.

I decided to pour peroxide on it. And although it bubbled a whole lot, it didn’t make any improvement. Almost a week went by, and it just seemed to get worse.

That’s when it hit me – this kitten had a warble.

A warble is a slang term for botfly larvae. These tiny larvae live in burrows and enter into a cat’s body through its mouth, nose, or anus. They definitely aren’t pretty to look at, and while they can be dangerous in some cases, they are fortunately quite easy to get rid of.

Here’s how to remove a warble from a cat – as well as more information on what this condition actually is.

What is a Warble?

A warble is a term for a botfly larvae infestation. Also known as Cuterebra, these tiny, worm-like creatures reside in burrows and enter into a cat’s body until it gets close to the skin. Then, it creates a small hole so it can breathe and then grows to maturity inside the cat.

Adult bot flies typically lay their eggs in or near rodents and rabbit burrows, where, after hatching, the larvae enter the bodies of the hosts. Often this is through the mouth or nose or via a skin wound. Several days later, the larvae move to tissues beneath the skin where they then continue to develop.

As you might expect, warbles are itchy, uncomfortable, and just downright unpleasant.

Often, warbles are confused for tumors. However, there’s a good chance that it’s a warble if your cat has no other symptoms and you live in North America. There are many kinds of Cuterebra in North America, and while they live mostly in southern Canada and the United States, botflies can be found in Mexico and other tropical areas, too.

If you suspect a warble, take a close look at it for a breathing hole. This is the telltale sign of a warble. Remember, warbles need breathing holes, so you’ll see a small hole in the center of the cat’s bump. The hole gets bigger the longer the warble is inside your cat.

Here’s a photo of a warble here.

Warbles can be found on any area of your cat’s body but are most common near the neck and head.

A warble cyst looks like a small open wound, so it can be tough to differentiate a warble cyst from other kinds of injuries.

You might notice other symptoms of warble in your cat, too. Warbles are more likely during periods of warm, wet weather, with most cases seen in the late summer. You aren’t likely to have problems with warbles during the winter.

Your cat might have hair loss and continuously, almost obsessively scratch or lick at an area. It can also suffer from secondary problems like infection or feline ischemic encephalopathy, a dangerous neurologic disease that results from the larvae migrating to the brain.

How Do Cats Get Warbles?

Typically, cats get warbles when they are hunting rabbits or rodents. They’ll unknowingly pick up the larvae near the entryway to a rodent’s burrow. Often, these infestations occur near the head or neck of a cat.

The good news is that warbles are generally not life-threatening. If there are only a few warbles on your cat, you shouldn’t have to worry about any long term effects or problems. However, if your cat has multiple warbles or if a warble develops near a sensitive tissue, organ, or nerve, there can be more serious effects.

The sooner you can remove the warble from your cat, the better – and the less likely your cat will suffer from permanent tissues or tissue damage.

How to Remove a Warble

The best tip I can give you if you notice a warble on your cat is to get that feline to a veterinarian – and fast. It can be tricky to remove a warble yourself, particularly if you have no background in doing so. Your vet will be able to get rid of the warble and clean the wound so that your cat doesn’t develop a more serious infection.

Also, there’s the chance that it’s not a warble but something else bothering your cat, so if you don’t have a positive diagnosis, you may want to leave that to the professionals. Sometimes vets will also anesthetize the cat before drawing out the warble with tweezers, which is obviously something you can’t do yourself.

Here’s a video of a vet removing a warble to give you an idea of what might happen.

However, there are other ways you can get a warble out.

One way is to use a venom extractor syringe. Often found in first aid kits, these tools can be used to suck the larvae out from underneath the skin. You can also give your cat an antiparasitic medication, like avermectin, which will cause the larvae to emerge.

You might have some success in flooding the warble with iodine. Iodine will help sanitize the area, preventing the risk of infection, and it will also cause the larvae to emerge from the hole and make it easier to remove.

There are several methods of pulling out warbles that are often used with some success but are not necessarily recommended.

For example, some people apply sap from matatorsalo trees, found in Costa Rica, which kill larvae but don’t remove them. You can also seal up the hole with petroleum jelly or nail polish, which will suffocate and kill the larvae. You can apply tape to the breathing hole, too, for the same effect.

Another technique is to squeeze the warble like a pimple to force the larvae out.

These tips aren’t recommended for several reasons. Killing the larvae or forcing it out in such a traumatic way can lead to anaphylactic shock or make removal of the body more difficult. This is problematic in itself, but can also increase the risk of infection.

Can Humans Get Warbles from Cats?

Humans can be infected with Cuterebra larvae – but don’t panic quite yet. While humans can get warbles, it’s not common. It’s also not possible for humans to get warbles from their pets, including cats, because warbles tend to be species-specific.

Can Other Animals Get Warbles?

Even larger animals can get warbles, though they aren’t usually referred to as such. Animals like sheep often get nasal botflies, which can be even more dangerous than the warbles your cat might get.

If you have multiple cats and notice that several of them have warbles, it’s not because the warbles themselves are contagious. The larvae won’t jump from one cat to another.

When there’s a case of multiple cats with warbles, it usually has to do with the fact that all of your cats are hanging out in the same area and are therefore more susceptible to picking up warbles as they stick to a cat’s fur and crawl beneath its skin.

The best way to remove a warble is to never have to deal with one in the first place! There are a few simple solutions to preventing warbles in cats.

If you can, don’t let your cat go outside. Indoor cats don’t get warbles simply because they aren’t ever exposed to them. Keeping your cats inside will also eliminate the risk of them being hit by cars or snatched up by predators.

Of course, for many people, this isn’t practical. Whether you need to keep your cat outdoors because it’s a barn cat or for other reasons, there are fortunately other steps you can take to prevent warbles.

One step is to treat your cat with a parasiticide, an insecticide that targets botflies. These can be applied to the back of your cat’s neck. Of course, you should check with your vet before applying these as you will want to find one that’s safe for use on cats. Consider brands of parasiticides like ivermectin, imidacloprid, and selamectin.

A final tip is to discourage rodents in or near your home. Cats usually contract warbles through interactions with rodents. Put some mousetraps around your home and call an exterminator, if necessary, to get rid of mice and rats.

Warbles are gross and can be super painful for your cat. However, the good news is that there are rarely serious health consequences involved (as long as your cat does not develop a secondary infection, it is not usually considered a medical emergency).

Take these steps to prevent warbles – and hopefully, this isn’t a problem you’ll ever have to deal with!

51 thoughts on “How to Remove a Warble from a Cat”

"Hi! I'm Kendra. I'm a wife, mother, and homesteader. I love everything that has to do with simple living. I'm a canning instructor, an avid gardener, and a constant learner of old-fashioned skills. Here is where I share it all. Welcome to the adventure!"
You Won't Believe It: How To Catch A Pig
Are Bison Dangerous? What to do if You Are Attacked
Goat Bloat: Quick Fixes and Prevention
What Is the Difference Between a Buffalo and a Bison?
Our First Egg