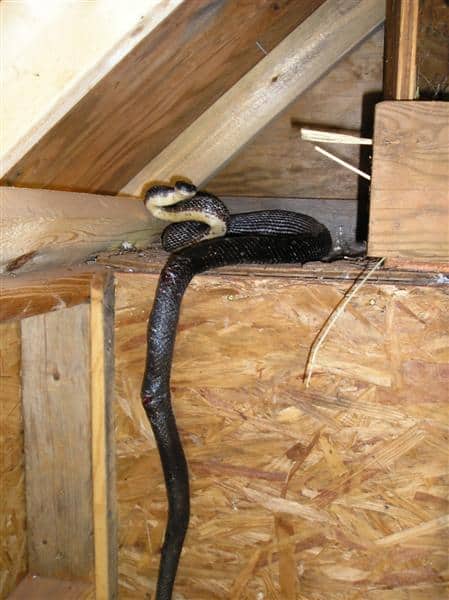 I almost forgot to tell you guys what happened a few weeks ago.

I had gone outside to the chicken run to do my periodic head count on the baby chicks. I always worry about them when they are so small, and I find myself out at the coop several times a day just to make sure they’re all doing alright.

But this time when I counted the chicks, I kept coming up one short. I looked everywhere, and counted and re-counted. But I was always one short. I knew it was a little black chick that was missing. 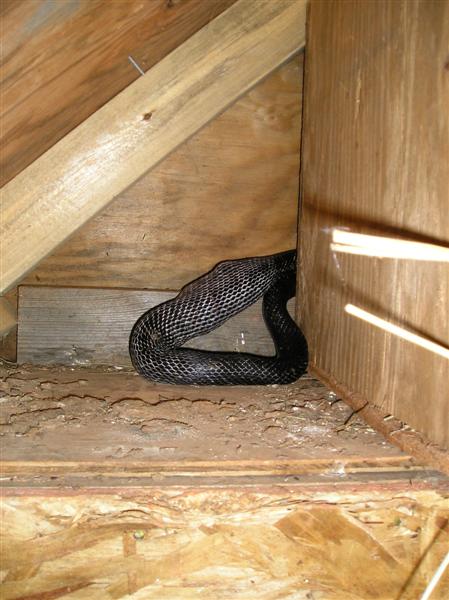 So, I went into the coop to see if it might be hanging out in there, and quickly spotted something black in the corner of the nesting boxes. I thought it was my chick, but as I got closer to it I realized it was actually the back end of a black snake, with a lump in its belly the size of my chick!

I was immediately hot with revenge. My poor chick!! Oh yes, this snake must die. And I admit, the question of whether I could still save my chick crossed my mind. Would it have been suffocated before it was swallowed? Or was it eaten alive? Is there a possibility I could rescue it from the stomach of its attacker?

I ran to my husband’s workshop and retrieved his machete. I hoped the snake would still be there by the time I got back to the coop. And he was. Unmoved and contentedly digesting the tiniest of my flock.

Mustering up every ounce of my body weight, I raised the machete over my head and came down on the snake’s body with all my strength. One mighty blow and the snake would be cut in two.

Uh-hem. But it wasn’t exactly so glorious. Instead, the blade simply bounced off, not even nicking the shiny flesh it was meant to sever.

I tried again, really putting every ounce of strength behind my weapon. Only to have it deflected with little impact once more.

Desperate, I set about whacking at the snake like a maniac, and was finally able to break the tough flesh just enough to make the snake mad. He pulled his head out from behind the nesting boxes (which got my attention enough to pause my attack), and he struck out at me from his ledge.

A bad word almost escaped my gasp as I stumbled backwards and nearly fell out the chicken coop door. Yikes!!

The snake was now on the floor of the coop, just under the roosts, aggravated and injured. Since he was out of my reach now, hiding under the rows of branches that our chickens roost on at night, I called the kids to come and check out what I was doing.

They stood in the doorway of the coop, interested in the intruder and eager to see what I was going to do with it. I gathered a little courage, and inched my way closer to him hoping to provoke the snake out of his hiding place. Closer and closer I moved, not taking my eyes off of his coiled body for a second. He was a big fella, about five feet long.

Yeah, I was a little nervous.

I stood about a foot and a half from him, my machete pointed in his direction, my eyes locked on his. I was mustering the nerves to try to whack him again. This snake had to die!! When from behind me came the voice of my eight year old, Jada, stating in her book smart matter-of-fact way,

“A snake’s striking distance is the length of its body.”

I was out the coop door before the last of her statement finished passing through her lips.

“Really?” I asked her, shocked at this new information.

I left the snake where he was and went inside to call my husband at work. “Um, Jerry… can I shoot the snake in the chicken coop?” You know. From a distance.

“What are you going to shoot him with?” my husband asked. “Your shotgun?”

“Can I use that?!” I asked hopefully. Just say the word.

“You’ll blow a hole in the floor of the coop!” he laughed. He suggested I use his pellet gun. But I don’t know how to use the pellet gun, so I decided I’d just let him handle it when he got home.

Later that day, Jerry made short work of the snake. He strutted right into the coop, and that was that. I was grateful, but slightly annoyed that I couldn’t have been as quick and effective. Before Jerry had killed it, the snake had regurgitated my poor baby chick on the floor in front of him. My poor chick, in its whole form, laying wet and dead. Such a waste.

Anyways, that was that. I still crack up at Jada’s little voice stating snake facts as if reading straight from an encyclopedia. She might have just saved me from a painful learning experience!

28 thoughts on “Snake In The Coop”

"Hi! I'm Kendra. I'm a wife, mother, and homesteader. I love everything that has to do with simple living. I'm a canning instructor, an avid gardener, and a constant learner of old-fashioned skills. Here is where I share it all. Welcome to the adventure!"
So, Can Chickens Eat Grape Vines?
Ideal Brooder Temperature: How to Keep It Steady
So, Can Chickens Eat Green Beans?
Our First 2 Dozen Eggs & What I've Learned
How to Get Your Chicks Down from the Tree