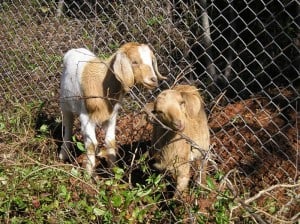 I’m so excited! Yesterday we got our first goats! Aren’t they cute?? Really, we had planned on getting chickens first, before we started getting other animals, but I found an ad for these goats for sale for $35/each and couldn’t pass up that deal!

They are Nubians (w/ a little Boer in them); both female. I plan on milking them eventually. We’ll wait a year or so before we breed them and begin milking. I wanted to get babies so that the kids could grow up with them and they could be used to us. Plus, I want to learn what I’m doing before I start milking them! And, the babies are cheaper to buy. The older they are, the more expensive they get. Normally to buy a full grown Nanny they run about $125! So, this was a good investment. 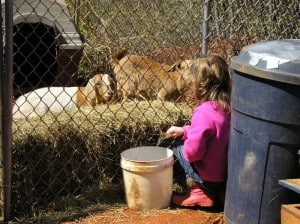 They don’t have horns; I’m hoping they won’t get any at all. I don’t see any nubs growing. They are still really timid around us, and won’t let us pet them yet. Jada has been sitting outside of their pen for the past hour, talking to them, singing a “goat song”, and dropping leaves through the fence. She’s so anxious for them to be friendly with her. I assured her that it will take time for them to get used to us, but eventually they’ll be running to play with her when they see her coming.

The people we bought them from sent a bale of hay with us. We also bought them a bag of feed at the tractor supply store for $7 for a 50 lb. bag. That should last at least a few months. I have to double check how much we’re supposed to give them.Their fenced in area is very overgrown, so they have lots of leaves and plants to munch on too. 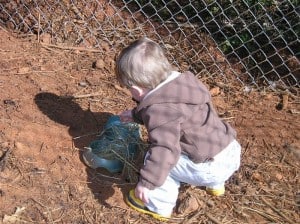 Titus kept filling a bowl with hay, hoping the goats would come and eat it. Then he wandered over to a nice pile of hard little round things that looked like a tasty treat, and picked them up to put in the bowl as well. A fist full of goat poop. Yuck!

We were fortunate to have lots of chain link fencing laying around, and two extra dog lots that we were able to construct into a big area for them. We put a padlock on the gate so the kids wouldn’t let them loose before they’re trained to follow. For now we have two big dog houses for them to sleep in at night. They’re so little, these are working nicely. We’ll be building a bigger “house” for them soon.

We haven’t fully decided on names for our new babies yet. Jada wants to name them “Sweetie” and “Jada”, but I told her we better not name one after her, it would be confusing 🙂

I like “Baby Mocha” for the little brown one, and I’ll let Jada keep “Sweetie” for the big one. I’ve gotta see what my hubby thinks though, before we settle on it. 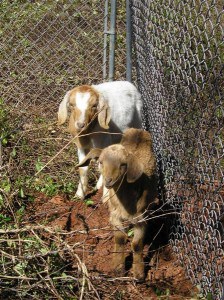 So, here they are!! Our first goats. I’m so curious what the future holds for us and these goats. I’m excited about the idea of having fresh milk, and being about to make goat’s milk soap too. I hope I like goat’s milk. I’ve never had it, but I’ve been told that it’s a lot like store bought whole milk, when it’s fresh. I did read that after the first day it begins to take on a strong flavor, so it’s best to drink it fresh.

My friend Mrs. Hope has been giving me lots of advice about raising goats. She also told me that anytime I want to come and try some fresh goat’s milk that I’m welcome to come over and taste hers. I’ll probably be seeing her soon. I’ll let you know what I think after I’ve tasted it! And as I learn more about raising goats, I’ll be sure to share all the info that I can!

10 thoughts on “Our New Baby Goats”