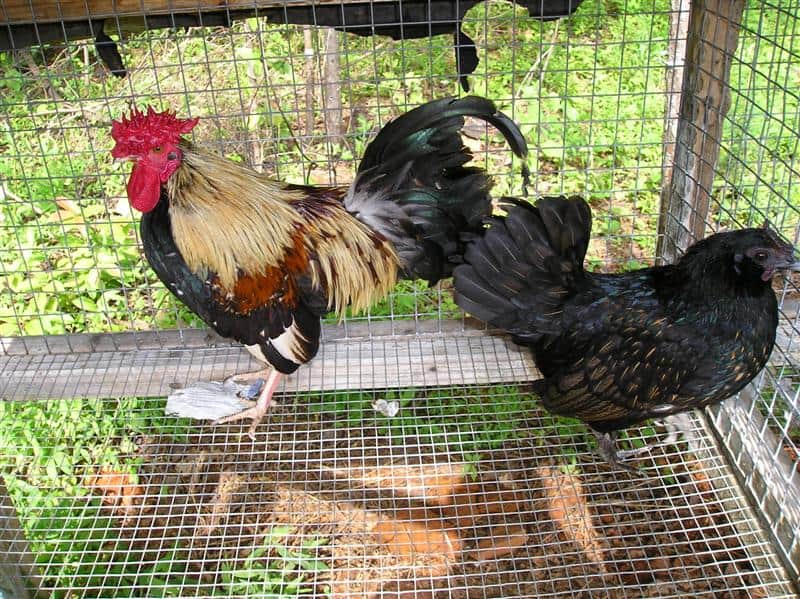 A few days ago my Father-in-law gave us 6 more chickens, these are Bantams. Actually, 3 of them are roosters, and 3 are hens. They are SO funny!! And boy are they loud! Those roosters crow all day long.

When we brought them home and put them in their new coops they were making all kinds of noise. Our other rooster (the white one we weren’t sure was a rooster or not) heard all of the crowing and decided that he would voice his own opinion.

So, for the first time ever, he crowed! But it wasn’t a nice crisp “Cock-a-doodle-do”, no, it sounded more like a goose trying to sound like a rooster… like the silly horn on a child’s bicycle.

When we heard him attempt his crow, my husband and I busted out laughing. It was the funniest thing!

What Are Bantam Chickens?

Bantam chickens are basically just tiny versions of regular chickens. The size can vary among breeds, but usually, a bantam will be roughly half the size of a normal bird of its breed.

A lot of people think that bantam chickens are their own breed, but that’s not the case. They are just the tiny, pint-sized versions of other breeds. As a result, there are more than 400 different recognized varieties of bantams, according to the American Bantam Association.

Bantams are aptly named after a town of Bantan, which is in Indonesia. The history of the word is this – when exploring sailors stopped by the port to stock up on food and water, they were astounded by the miniature chickens there.

They were much tinier than the chickens they were used to seeing! Eventually, miniature birds of all breeds became known as bantam chickens in this fashion.

There are several categories of bantam chickens. True bantams are those that don’t exist as a larger breed – so breeds like Sebright, Rosecomb, and Nankin would qualify.

These are all relatively rare breeds and are naturally occurring – meaning humans haven’t messed with them or their breeding in any way to get them to be so tall.

Miniaturized bantams, on the other hand, developed from standard breeds, like Cochins, Orpingtons, or other favorite chicken breeds.

Developed bantams are those that were developed even more, and that have been around so long that it’s unclear where and how they got their start. An example would include a Pekin or a Japanese bantam.

As I explained before, caring for bantam chickens really isn’t much different than taking care of their larger counterparts. Pretty much everything you need to do will be exactly the same.

There are a few differences that are important to note, however, especially if you are used to primarily raising regular-sized chickens and aren’t sure where to start.

To start with, bantams have a faster metabolism than standard breed birds. They are therefore often not as tolerant of the cold as standard breeds, although this does, of course, vary by the individual chicken and the bantam breed.

Therefore, you will want to make sure the housing is kept warm, dry, and draft proof. You don’t need to do much to ensure that this happens.

I don’t usually recommend coop heaters, as they introduce a fire risk, but you can also make sure the coop is well ventilated to start with.

Bantam chickens also do not need quite as much space as their full-sized counterparts. Generally, you can get away with just two square feet in the coop and four square feet in the run – about half of what is recommended for other chicken breeds.

One thing to be aware of is that bantam chickens are fantastic at flying. If you intend to house them in a run, you may want to cover it so that they don’t jump out.

This will also prevent them from being targeted by various species of predators.

If you house your bantams with regular-sized chickens, make sure everybody has plenty of space and food so that there isn’t as much competition for resources.

You may want to put your nesting boxes and roosts at varying heights, too. Since these guys are smaller, they may have more trouble jumping up high.

Food and water should be distributed just as it would to standard chickens, but luckily, bantams don’t eat quite as much food – usually only a pound or so per month!

Bantam chickens are prone to the same health issues that regular chickens are. They also have about the same lifespan – ten years or so in most cases, although they won’t be productive for quite this long.

Some types of bantam chickens have feathers on their legs. If that’s the case, you will need to make sure the pen is clean and dry so they don’t get hypothermic.

If their feet do get disgusting, you can clean them in a foot bath. This can be beneficial in another way, since feather-legged birds are more likely to fall victim to scaly leg mites.

A bantam chicken is the perfect option if you are short on space but big on your love for backyard chickens! Two bantam chickens can easily fit in the space generally required by just one, so if you choose to raise bantams, you’ll have plenty of space for your flock even if you live in a super crowded location.

Bantams aren’t great as meat or egg birds in fact, most people raise them as pets. Their eggs are usually half the size of standard eggs so you’ll need to up your ratios in cooking. Usually, three bantam eggs will equal two standard-sized eggs.

They lay pretty consistently, though. This is dependent on breed, but usually, you’ll get decent production out of your birds.

Bantams that are not “true” bantams but are instead miniature versions of standard breeds tend to lay a bit better than others.

Some bantams even go broody! Again, this is no different than chickens of other normal-sized breeds, but let me tell you – it can be quite adorable to see a bantam egg hatch!

Bantams are also known for being quite sweet and friendly. Yes, even the roosters! There are plenty of colors, patterns, and variations to choose from, too, so you’ll have plenty of options when it comes to filling your backyard coop.

My mother-in-law let me borrow a really good book on raising chickens called Chickens: Tending a Small-Scale Flock for Pleasure and Profit (Hobby Farms. It has everything you need to know about chickens! I’m going to be reading up on how to take care of all these guys we now have.

7 thoughts on “Bantam Chickens: Everything You Need to Know”