I’m finally ready to tell you all about my first wheat grinder. I was waiting until I’d had a chance to grind my first batch of wheat so that I could share all the nitty gritty with those of you who are like me, and have no clue about this stuff!

After reading tons of reviews, and going over the pros and cons of a dozen different models, we finally settled on the The Wonder Junior Deluxe Hand Mill. Though it was quite pricey, at $220, it was by far the best rated and most recommended hand mill. Although I would have loved to have gotten an electric mill, the whole point in even getting grain and a mill is first and foremost to be prepared in case of an emergency, which could include loss of power. A non-electric hand mill was the practical choice. Eventually, I’d love to have an electric mill for everyday use, since home ground wheat is so much better for you than store bought, not to mention easier on the old wallet! But for now, it’s old school for us!

I ordered from USA Emergency Supply. Prices were pretty consistent most places, but this site offered free shipping. Here is how it came: 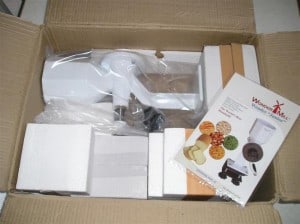 Pretty much completely assembled. Only the base and the burrs needed to be screwed on. Very simple. 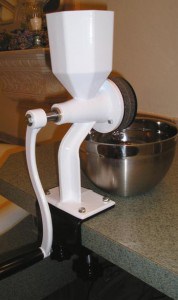 Here it is all put together. We had to mount it in the bathroom for now, cause it wouldn’t fit onto my kitchen counters. I need Jerry to build a base for me to mount it onto so that I can use it in the kitchen. But this works.

For those of you who are wondering, the burrs are those round gray stone things on the bowl side of the grinder. This grinder came with two sets of burrs: stone and steel. I chose to use the stone burrs for grinding the wheat as they give a finer grind. Steel burrs are better for grinding seeds, coffee beans, and making butters, like peanut butter. 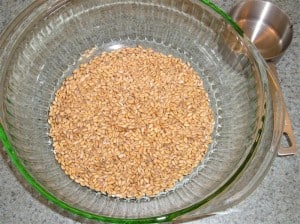 And poured it into the grinder: 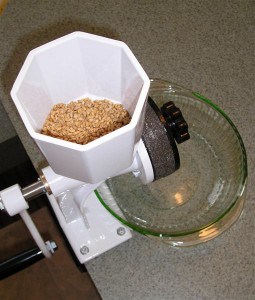 You’ll need to place a bowl underneath the burrs to catch the falling flour. It took a little adjusting to get the grinding fine enough. I found it worked best when, after grinding just a little bit, I tightened the burrs as tight as they would go, and then loosened them one notch.

The grinding wasn’t as easy as I’d hoped. It wasn’t hard, just tiring. Yes people, I broke a little sweat. At least I got my workout for the week! It took me 10 min. without much pause to grind one cup of wheat.

And here’s the flour I made! It was a little bit course. It could be used like this, it would just make a denser bread. Sifting it would help remove the bigger pieces and yield a softer loaf.

I made the mistake of removing the burrs over the bowl, thinking that I could get some of the remaining flour out of the mill. Yeah, don’t do that. What was still left in between the burrs was not ground well, so it dumped a bunch of whole pieces into my nicely ground four. I scooped it out and put it back into the mill to re-grind it. Yeah, don’t do that either. The majority of what I’d just put back into the mill was too fine to grind, so it wouldn’t spit anything back out. I had to unscrew the whole contraption and dump it all back into my bowl. I swear, if there’s a way to mess something up, I’m your girl! 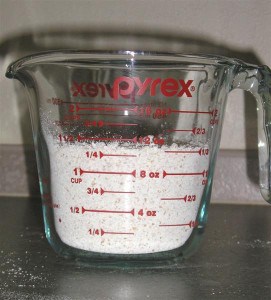 Anyways, after sifting out the big pieces, one cup of wheat berries made about 1 1/4 cups of flour. Pretty cool!

My next task is to bake something with this freshly ground flour. Here are some recipes I found that I’d like to try. If you remember from my post on storing wheat berries, what we got is soft white winter wheat, also called pastry wheat. It’s good for baking pastries, biscuits, pancakes, and quick breads.

So, now I have a few questions for the more experienced…

Does anyone know how long freshly ground flour will stay good? I’ve read that it needs to be used within the first 24 hours, and stored in the fridge.

Since soft white wheat is cheaper for me than hard wheat, does anyone know a good ratio for mixing soft and hard wheat to get a good loaf, using the most soft wheat possible?? I’d love to know if anyone has experimented with this.

Well, there you go! My very first attempt at using a mill and grinding wheat. Pretty satisfying, if I do say so myself.

"Hi! I'm Kendra. I'm a wife, mother, and homesteader. I love everything that has to do with simple living. I'm a canning instructor, an avid gardener, and a constant learner of old-fashioned skills. Here is where I share it all. Welcome to the adventure!"
The Best Way To Get Worms Out Of Broccoli
Homemade Marshmallows (Kosher)
Introduction to Coffee and its Varieties
Easy Breaded Parmesan Chicken
Farm Fresh Eggs vs. Store Bought: Key Differences