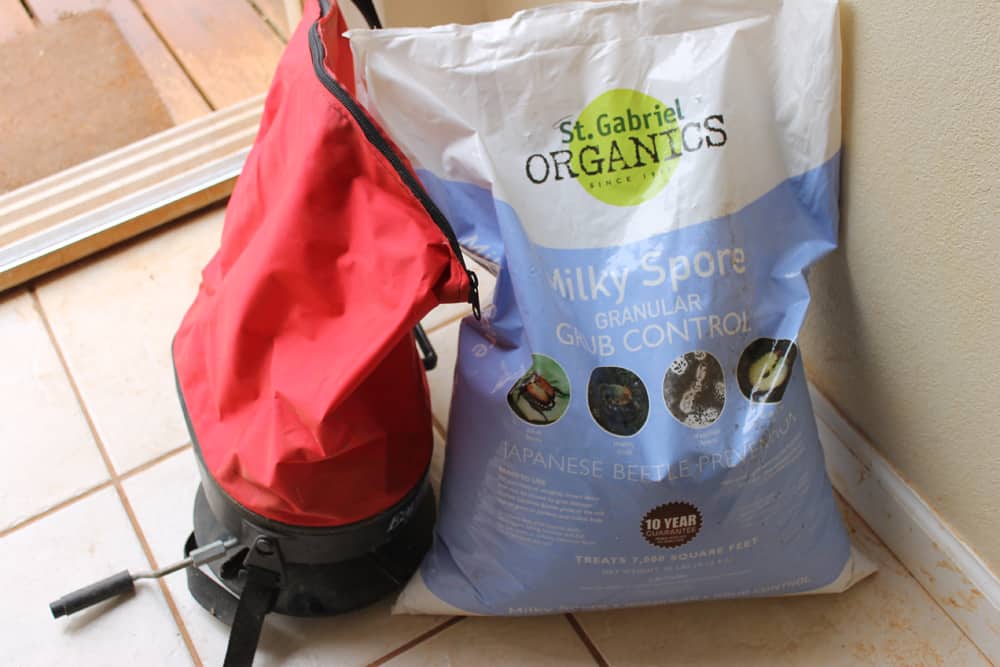 Japanese Beetles and June Bugs have become a real issue on our homestead. It got really bad after I had a dumptruck load of compost delivered a couple of years ago to fill our raised beds, in which I found many beetle grubs.

At the time I didn’t know what they were. I thought they were gross, but didn’t really pay much attention to them. Had I just taken a moment to research what they were I could have taken more preventative action.

Since I didn’t do anything about those first grubs, they had the opportunity to mature, lay more eggs, and multiply like crazy, coming back with a vengeance year after year.

Above is what a beetle grub looks like. Sometimes they’re white, and sometimes they’re grayish. Don’t ask me if it’s a June Bug or Japanese Beetle. I can’t tell the grubs apart. Either way, it’s bad.

You do not want to find these in your dirt. If you do, squish them or feed them to your chickens. Otherwise, they’ll wreak havoc on your plants. Not only do they defoliate above ground, they also eat the roots of plants and grass underneath the soil.

Last year was the worst infestation yet. Beetles were everywhere, destroying all of the foliage on our fruit trees, grapevines, rose bushes, raspberries, and many of the garden plants.

Countless hours were spent knocking beetles off of the leaves they were enjoying, into a bucket of water to be fed to the chickens (which they loved, by the way). Hundreds were collected, and still they kept coming. I bought Japanese Beetle Traps which definitely caught a ton but didn’t make a significant enough dent in the overall population.

Some people use the names interchangeably ( I used to!), but as my daughter pointed out to me one day, there is a noticeable difference between the species. As you can see in the picture above, the June Bug on the left is MUCH larger than the Japanese Beetle on the right. Both pests begin emerging in June, and are pretty much full blown by July.

(Jada likes to tie a string to the leg of a June Bug and watch it fly in circles. The kids find this highly entertaining. Amazingly, once they’re untied they get away unscathed.)

Milky spore (Paenibacillus popilliae) is a natural soil-dwelling bacteria. When the grubs eat the bacteria in the soil, the bacteria reproduce in the gut and eventually kill the grub from the inside out.

When the grub dies (usually between 1-3 weeks) and decomposes, billions of new spores are introduced to the soil and the process repeats.

This bacteria is not harmful to birds, beneficial insects, pets or children. Just make sure you don’t inhale the dust as you spread the spores.

As it is recommended to water the granules after they have been applied to your yard, I decided to take advantage of the coming rain yesterday to spread milky spore around our homestead. For best results, you should apply the spores in Spring (March-May), Summer (Aug.), and Fall for 2 consecutive years.

I used St. Gabriel Organics Milky Spore Granules, and an Earthway Handheld Broadcast Spreader, set to the #5 spreading setting. One 20 lb. bag did our entire front yard and garden, which is about 1/4 of an acre (maybe?). I’ll need to get another bag to do the back yard also.

I’m really crossing my fingers that this works!! I’m sure we’ll still have a problem with the beetles this year, but I’m hoping it will be less and less of an issue as the milky spores spread in our yard and diminish the grub population.

I’d love to know what you have found to be a helpful natural method of beetle control!

"Hi! I'm Kendra. I'm a wife, mother, and homesteader. I love everything that has to do with simple living. I'm a canning instructor, an avid gardener, and a constant learner of old-fashioned skills. Here is where I share it all. Welcome to the adventure!"
How to Grow Comfrey… and Why You Should
How to Grow and Use White Clover
How to Grow Canna Lilies
How to Prune a Blackberry Bush
How to Plant and Grow Peppermint