I called my friend Mrs. Hope (the goat lady) yesterday to ask her advice about worming our goats. Somewhere in our conversation she asked if the goats “knew” us yet. I told her that they start calling every time they hear the back door open, or hear our voices. She said, “Oh yeah, they know you.” And she suggested that I start training them to be led, while they’re still little.

I told her I’d been thinking about how I need to do that. She said, “Yeah! Let them babies out of their pen!” I was really surprised by that! “Really? Won’t they run away?” I asked. “Naw, you’re they’re mama now. If you’re the one who feeds them, they won’t go far,” she reassured.

I’d love to let them out, I thought. They have already cleared out the greenery in their enclosure, and there is a ton of brush and plants all around that they would love to munch on. So, I decided that I would let them out today if it was nice outside.

I had to do my grocery shopping this morning, so while I was at Walmart doing my “couponing” I picked up some dog collars for the goats, just in case I had to drag them back into their pen.

It was beautiful outside, so after we unloaded the groceries, and ate lunch I asked the kids, “Wanna let the goats loose?” Jada in particular was very excited about the idea.

We went out to their pen and I put a little grain in their bowl to distract them while we put their collars on. (I picked out some cute pink camo collars for my girls.) As they finished their snack I said, “Okay babies, I’m gonna let you loose. Please don’t take off, okay?”

I braced myself, fully expecting them to run out the door and away through the woods, laughing “See ya later sucker!” as they went.

I opened the gate and stepped aside.

Silly goats. They just stood where they were. They didn’t bum rush the door for freedom! The weren’t sure what to do at first. I actually had to coax them out with some feed in a cup. Once they were out, they really just stuck around the fence, eating the brush beside their enclosure for a while. 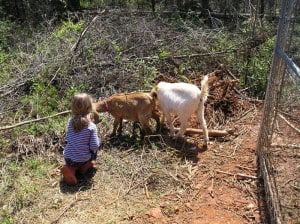 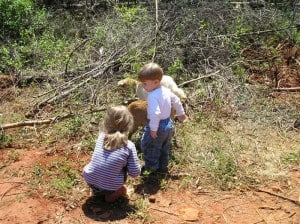 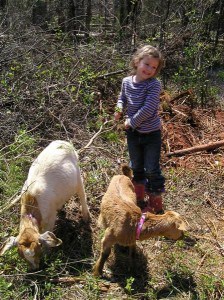 My kids really enjoyed having the goats loose, and followed them around to pet them while they grazed. Eventually they got a little braver and began to explore their new surroundings. They never did go far though.

I covered my potted strawberries outside so they wouldn’t eat them, but they did manage to find their way over to my raspberry bush. Boogers! I had to shoo them away from it several times.

I was really surprised at how easy they were to round up, and when I wanted them to get back in their pen I just shook a cup of grain for them to hear, and they came running back in. No problem!

I’m excited about being able to let them free range during the day. I don’t think I’ll let them go unsupervised for a long time still. I’ll have to see if I get comfortable with that. But once I get my garden planted and my fruit trees start to bloom, I’ll definitely have to fence them in. 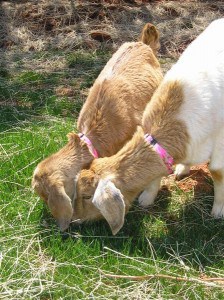 They were too busy mowing my yard to look up and smile for the camera. Oh well. They sure were happy to be out!