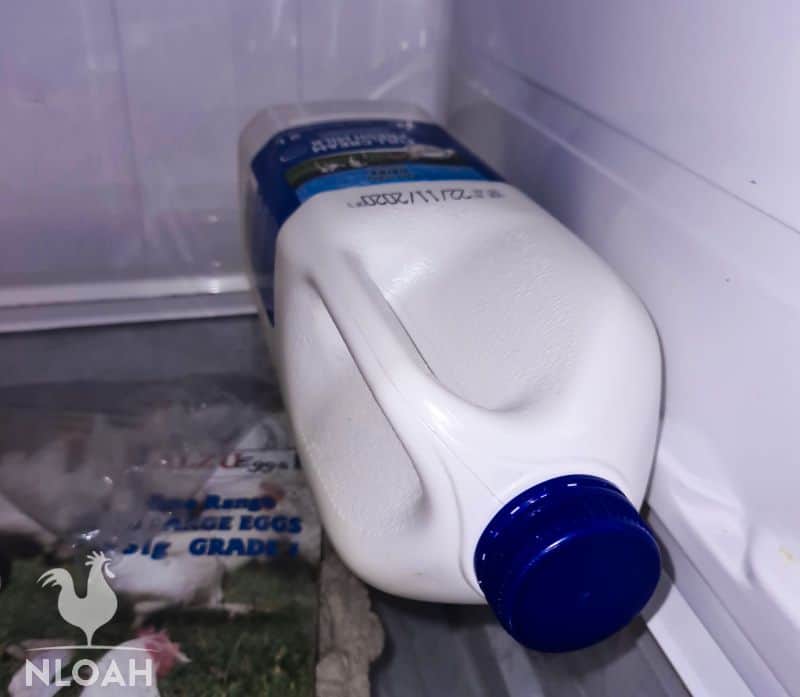 The other day, due to shortages caused by the coronavirus pandemic, I paid $6.99 for a gallon of milk. That’s seven dollars, folks! Seven dollars I’d be much happier spending on something else, to say the very least.

I can’t control milk prices, and while I am not a big milk drinker myself, my husband loves it. That means it’s a staple in our weekly grocery shopping list and it’s something we aren’t yet committed to producing ourselves on our small farm (we raise a ton of animals, but a dairy cow is not – and probably won’t ever be – one of them).

Fortunately, there are a few ways you can at least keep milk fresh for longer. By doing this, you’ll be able to stretch your grocery budget and get a little bit more for your dollar. No more spoiled milk!

Most milk is thrown away because it’s not used in time – duh, that’s a no-brainer, right? However, sometimes we throw milk away simply because it’s getting close to its use-by date and we assume that it can’t be used past that time.

That’s true, to some extent. But what if you could “save” that milk that’s about to go bad?

You can – by freezing it.

To make milk last longer, freeze it. You can stash it in the freezer at any time before its use-by date (just don’t try to freeze expired milk). Pour it into an airtight container or some ice cube trays. You can also stash it in the original container, as long as you aren’t worried about it leaking. This is a great way to store milk and keep milk fresh longer if you’re about to go on vacation.

Now, I do have one piece of advice here. Frozen and then thawed milk won’t taste the best if you just plan on drinking it in a glass. The freezing and thawing process causes some of the fat to separate, which isn’t the greatest taste in the world. However, if you just plan on using it in recipes or in hot beverages, this tip will work just fine.

The best way to thaw frozen milk is to leave it in the refrigerator for a day or two. You can also put it in a bowl of cold water if you are in a hurry.

#2. Keep it in the Fridge – and at the Right Temperature

Okay, so we all know that milk is supposed to be stored in the refrigerator – but did you know that it needs to be at a very particular temperature? The ideal temperature for keeping milk in the refrigerator is around 32 to 40 degrees Fahrenheit. If you get too far outside of this range, your milk will stay fresh for a while – but nearly as long as it could.

One other tip is to master where you have placed the milk in the refrigerator. Don’t put it in the door. It will be exposed to fluctuating temperatures here, which will cause it to go bad more quickly. The more the milk is exposed to warm air, the faster it will lose its freshness.

The coldest parts of the refrigerator are the best when it comes to keeping milk fresh for longer. Usually, those places are the back and bottom. Just make sure the refrigerator isn’t too cold, or you might end up with ice chips in the milk.

Okay, maybe everybody knows this trick already. But, for those of you who might not know, if you add a pinch of salt to a gallon of milk it will make it last longer. Store bought or fresh, it doesn’t matter. Something about the salt preserves the milk and keeps it from spoiling as quickly. (Of coarse, around here milk doesn’t last long enough to spoil!)

You can also freeze it. Just pour a little out before freezing to allow for expansion. I try to use it within two months. When you’re ready to use it, just let it thaw in the refrigerator for a couple of days, or in a sink full of hot water.

Don’t have any salt? You can also use a teaspoon of baking soda as soon as you open it. This will add another week to its shelf life.

Here’s the thing – milk should be used within seven days after opening for the best freshness. But after it’s already been opened, you can follow the use-by date.

Just keep in mind that these dates aren’t always the best indicator of a milk’s freshness. If you really want to know whether milk is fresh (or safe) to drink, just give it a sniff. Your nose will clue you in to whether it’s safe to drink.

Keep in mind that sometimes, milk’s best before date or best by date isn’t entirely accurate because the “cold chain” of the milk may have been broken from the time it was pasteurized and packaged to the time it was consumed. If milk is continuously left on the counter at too-high (aka room) temperatures, it can cause the amount of bacteria to double every 15 minutes. That date, therefore, becomes less and less accurate as time goes on.

#5. Use Up All Leftover Milk

If you’re getting close to the use-by date on your gallon of milk but know you won’t drink it in time, it may be a good idea to start getting more creative in your approach.

There are all kinds of ways you can use up leftover milk, from making tomato soup and grilled cheese sandwiches, making cheese or yogurt, or even giving yourself a milk facial!

If you’ve ever bought organic milk, you may have realized that it seems to last a lot longer than regular milk. That’s because the way it is pasteurized makes it last much longer. If you can afford it, go organic.

Plus, it’s usually (though not always) better for you. Organic milk can last up to one month, compared to just a week for the regular stuff.

When I’m grocery shopping, I make it a point to shop the interior of the store first and the perimeter last.

That’s because most of my canned and dry goods are in the center of the store while the perishables (like produce and dairy) are on the outside. This prevents things like my tender fruits and vegetables from getting crushed by the weight of the canned goods in the cart!

There’s another reason I shop like this, and that’s so that I pick up my milk and cheese last. The ideal temperature for milk, as I mentioned, is right around 35 degrees. The longer the milk is exposed to warm air, the more quickly and more likely it is to be exposed to bacteria.

Once you get home, make your milk the first thing you put away. This will help you keep it fresh for much longer. If it’s hot when you plan on doing your shopping, consider bringing along a cooler or cooler bag to keep the milk cool on the drive home.

And when you pick up that milk at the grocery store, pick the one with the furthest use-by date. Look toward the back of the cooler, which is where new milk is stored when the shelves are restocked.

#8. Return it to the Fridge ASAP

If you’re cooking something that calls for milk, don’t let it hang out on the counter while you get everything else put together. Instead, get that gallon back to the refrigerator as soon as you can. Pour your glass and put it back.

The same goes for hanging around with the refrigerator door open. This isn’t good news for anything in your refrigerator, but especially for your milk.

Although I doubt there are too many people among us who keep their milk out on the counter, there are plenty of us making these egregious mistakes when it comes to storing milk.

For starters, don’t pour unused milk back into the original bottle. Say, for example, you poured yourself a glass of milk to have with dinner, then decided you didn’t really want it after dinner was over. Don’t dump it back in. When milk spends any amount of time at room temperature, the process of spoilage begins.

Similarly, do your best to keep the lid on the bottle. Screw it on tightly so the milk doesn’t absorb odors or begin to spoil prematurely. Don’t expose the milk to light, as it destroys many vitamins and nutrients, and keep your refrigerator as clean as possible. It picks up odors easily, which is why you might notice your dinnertime glass of milk smelling a bit like onions!

For some containers of milk, like cardboard cartons, you don’t have the luxury of screwing on a cap after you’ve opened them. You’ll need to instead cover the opening with plastic wrap and then secure a rubber band around it – this will create a barrier so bacteria can’t get into the milk.

What About Other Types of Milk?

It’s not just cow’s milk that you need to learn how to store properly. You also need to think about how you’re storing other kinds of milk, too.

For example, canned or ultra-heat treated milk still needs to be stored in the refrigerator for maximum freshness. Even though you’ve bought it at room temperature, transferring it to an airtight container and putting it in the refrigerator will help to preserve its freshness. Powdered milk doesn’t need to be stored in the fridge, but it should be kept in a cool, dry place and consumed within three days after it’s been opened.

Flavored milks also need to be refrigerated. It’s actually even more important for these milks, since it can be harder to tell whether it’s gone bad.

Skim and 2% milk freeze better than whole but the shelf life is more or less the same. This is also the case with other animal milks, like goat and sheep.

Many non-animal milks, like soy, almond, rice, and coconut can be stored unopened in a pantry. The temperature needs to be between 50 and 70 degrees Fahrenheit but once you’ve opened or moved these milks to the refrigerator, the storage guidelines are the same.

Keep Milk Fresher for Longer With These Tips

If you’re sick of dumping old milk down the drain, it’s time you consider these tips to kick the habit. After all, there’s no point crying over spilled milk – but I’ve definitely cried over wasted milk, that’s for sure!

No more spoiled milk. That’s a great goal to have! By following these tips, you’ll be able to make the most of your weekly grocery shopping – and quit dumping it down the drain.

"Hi! I'm Kendra. I'm a wife, mother, and homesteader. I love everything that has to do with simple living. I'm a canning instructor, an avid gardener, and a constant learner of old-fashioned skills. Here is where I share it all. Welcome to the adventure!"
8 Places To Find Wheat Berries for Your Stockpile
Light and Fluffy Bread Machine Yeast Rolls
How To Freeze Shredded Zucchini For Quick Breads
Uses For Pickle Juice (Recipes, Tips & More)
Easy Breaded Parmesan Chicken