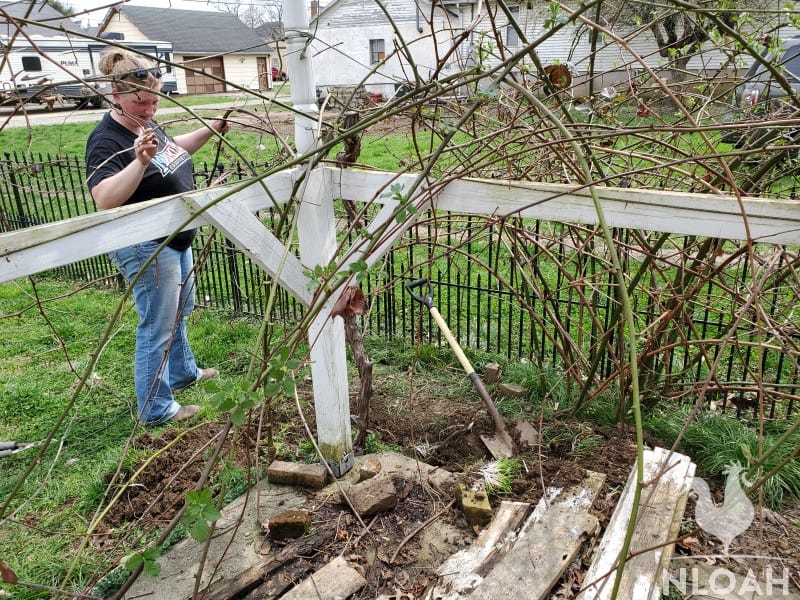 The blackberry is one of my favorite fruits. You can grow your own or forage for wild ones. Either are fine, I actually do both. When dealing with wild plants just leave them be, and let nature do its work.

A tame blackberry bush is very easy to grow, but does require some care. In the spring, you will notice the stalks start to form little leaves telling you that your plant is going to produce for you yet another year.

Once you have your berries all set and they ripen, then you will have plenty to harvest. There will be an abundance of berries that you will need to check and pick every other day or so.

You will want to stay on top of the harvesting, or you will lose the berries to the birds and to other little critters.

There are three types of blackberry bushes. It is very easy to identify them, as they are pretty self explanatory:

The erect blackberry bush will stand tall on its own, while the trailing one grows long canes and requires being tied to a trellis of some sort.

The thornless are great because you don’t get all scratched up while you are harvesting.

However, to me they seem to be a little more difficult to grow. The fact that my goats have found them doesn’t help. A net is handy to cover your blackberry patch to prevent this.

Be sure to not plant your blackberry patch next to wild ones as they can spread diseases to your tame plants. Your berries require full sun and space to grow properly.

The erect bush types need to be about 3 feet apart for adequate space. The trailing berry plant requires space of about 5 to 8 feet. The rows should be about eight feet apart for either type.

It is important for the plants to be spaced properly for adequate growing. The space also leaves you with room to be able to get in amongst your plants to pick the berries.

The soil needs to be fertile, and provide good drainage for the berries. Using a good fertilizer and natural compost is great for your blackberry patch.

Mulching is great for keeping the berries moist, and it helps to control weeds. When I clean my coop, I simply throw the whole mess onto the berry patch; it serves as compost and mulch.

The Growth of a Blackberry Bush

A blackberry bush is considered a perennial. The roots stay alive year after year, while the canes are biennial and die at the end of the growing season.

The biennial canes mean that the roots have to shoot up stalks (canes) one year, the next year they grow fruit, and then they die at the end of the season.

Every year, the roots will send up new canes to replace the ones that die the year before. Therefore, keeping the bush alive and producing year after year.

The blackberry bush is considered one of the easiest fruits to grow. Even with it being simple to grow you still need to prune once a year the bushes don’t become unmanageable.

The trailing blackberry bush will need to be trained to grow correctly. This is easily done with yearly pruning and tying the canes to the trellis.

A well pruned blackberry patch will provide you with an abundance of berries for eating, jams, jellies, and syrups for years to come. Pruning also keeps your plants healthy, and allows for new shoots to grow and for the blackberry bush to be stronger.

One way this is done is when the stalk is able to lay on the ground, it will reroot itself. Also, it will send new plants up from the root itself.

This method helps to ensure a plentiful harvest and vast number of blackberry plants.

You can transplant the new plants or leave them to produce where they are, or you can dig them up and share them with a friend or neighbor. The new plants that have started will not produce berries until the second year due to the new plant being primocanes.

To properly prune, you need to be able to look at the canes and tell which ones need to be left and which need to be cut.

The floricanes were primocanes the first year. The floricanes are what you will cut. This sounds a little confusing. In a nutshell, simply prune the cane that just fruited, and leave the new one that didn’t.

This year’s new cane will grow berries the next year. You can tell new growth based on the color of the stalk.

You can see new growth on some stems and then you can see all new shoots that have grown. Leave the new growth because it will produce berries next year. Imagine the finished product in your head and get to pruning.

Truth be told, you can cut the shoots back after you have harvested the berries, this way you will know that you have pruned the correct canes.

However, I don’t have myself that well organized, and tend to forget about the bush after the harvest due to the work that I have to do with the berries. Therefore, I am a late winter pruner.

I just came across a tame blackberry patch that had some flat canes. The patch had not been kept up with and was out of control growing everywhere and laying on the ground. Anyhow, a cane got run over by a mower and it grew back in flat.

Once it was over the damaged section it rounded back out. It was really something to see.

This is why you should prune and train your blackberry bushes. I took several pictures because it honestly amazed me, of course that is easily done.

The plant doesn’t seem to be affected by this, but it sure is strange to see it with this shape and how it fixed itself.

The flattened stalk was about three feet long before it split off and rounded out again. I would think hitting it with a mower would have killed that end of the plant, but not in this case.

With proper pruning and care, your patch of blackberry bushes will provide plenty of fruit for several years. Pruning does not take long to do.

Also, throwing some compost and mulch on your berry patch is an easy task to do as you are out and about doing chores. It is no wonder that blackberries are considered one of the easiest fruits to grow, even for a procrastinator such as myself.

4 thoughts on “How to Prune a Blackberry Bush”

"Hi! I'm Kendra. I'm a wife, mother, and homesteader. I love everything that has to do with simple living. I'm a canning instructor, an avid gardener, and a constant learner of old-fashioned skills. Here is where I share it all. Welcome to the adventure!"
What Makes Tomatoes Split?
Growing Cilantro Step by Step
How To Bale and Store Hay
How to Grow Olive Trees Step By Step
Gardening on a Budget