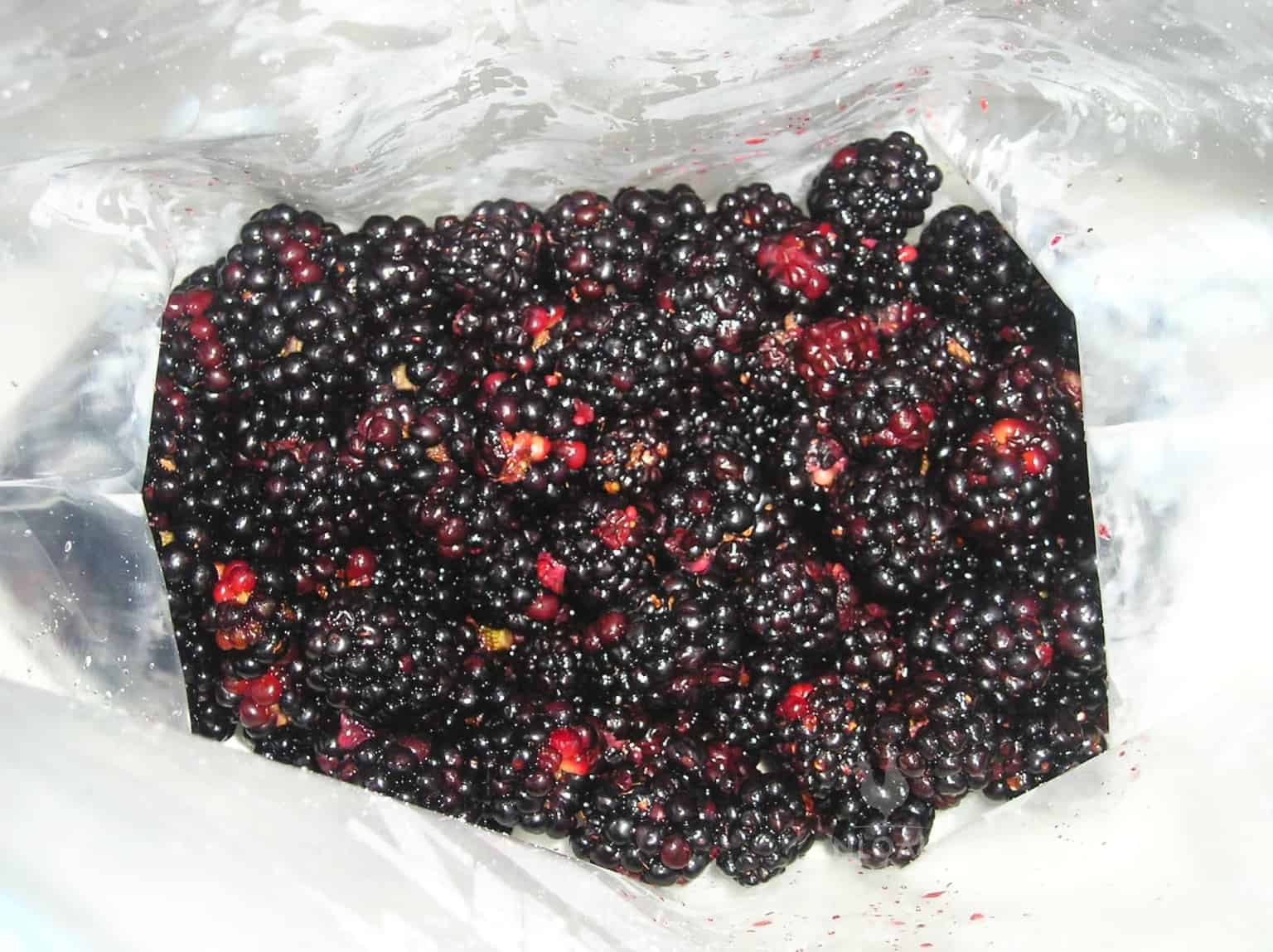 Our very thoughtful neighbor up the road has been saving blackberries for me from her bushes. We spent a lot of time harvesting wild blackberries around our property this year, but the fruits were so tiny and sour compared to her thornless variety.

When I first saw them, I couldn’t believe how humongous her blackberries were! They’re easily four times the size of the largest wild blackberries I’ve foraged.

I’m excited to have worked out a plant trade with her later this fall, some of my raspberries for some of her blackberries.

Both plants send off baby plants from the main stem, which are easy enough to dig up and transplant elsewhere, so trading will help us thin our beds as well as build our garden variety.

I’ve learned something from her blackberries that I never noticed with wild ones. Blackberries have worms. Teeny, tiny, white worms.

They burrow deep into the center of the berry, where you’d never see them unless you cut the berry in half or you just happen to see one sticking its ugly head out.

What Are Blackberry Worms?

As much as you might be horrified to admit it, blackberry worms are actually incredibly common. Almost all fresh blackberries have worms in them, in fact.

Most of the time, these worms are the larvae of fruit flies, Drosophila suzukii, or spotted wing drosophila. Fortunately, they’re safe to eat (besides being disgusting).

These fruit flies can be found just about anywhere, meaning very few blackberry-growers are immune. They are more common after mild, warm winters, as it makes it easier for the larvae and flies to overwinter.

Spotted wing drosophila was first found in Hawaii several years ago, and introduced to California in 2008. Now, it is found just about all over the country.

Blackberries aren’t the only plants that are at risk of worm-infestation either. In fact, these worms can be found in all kinds of fruit-bearing plants, including cherry trees and raspberry bushes. Even huckleberries can host these flies, as can apples, nectarines, pears, peaches, grapes, plums, strawberries, and more.

Closely related to the vinegar fly, the same kind of fruit fly that hangs out in your kitchen, this fly is more ruthless.

The fruit flies that eventually produce blackberry worms attack fruit in the early ripening process, inserting their larvae into fruit by piercing each berry with a needle-like ovipositor. Each blackberry can contain up to ten eggs, with the eggs hatching in about one day.

Once the fruit breaks down, the worm will emerge and fall into the soil, forming a pupa and eventually becoming an adult fly.

They are extremely hated by commercial growers, as they can kill all kinds of soft-skinned fruits. However, if you’re picking your own berries, you don’t have as much to worry about. Although they are admittedly disgusting, they won’t make you sick. Chances are, you won’t even notice they’re there.

How to Prevent Blackberry Worms

One of the easiest ways to prevent accidentally ingesting blackberry worms is to harvest your fruits early, before they get overripe. Put them in the refrigerator as soon as you do, as this will kill the worms.

Know the Signs When Harvesting

Although it’s often impossible to determine whether your berries have been infested with worms, you can sometimes get a good handle on whether there are worms hanging around by taking a close look at the berries.

Often, blackberries that are infected with the larvae will have a punctured area and will release some juice during handling (no matter how careful you are).

Sometimes, the stem part of the berry will soften earlier and you can actually see the larvae in the top of the berry.

Some growers experience some limited success when using vinegar traps to collect and kill flies in the berry patch. Although you might not get all of the worms out, it can certainly help cut down on their populations.

Consider hanging some plastic bags near your plants. Punch some small holes into them and add some leftover fruit, like banana peels. This should attract the flies and trap them inside so they don’t go after your berry bushes.

You can also add some unscented liquid soap to help the flies drown if you use a liquid solution, like vinegar or white wine.

There are various pesticides you can use to prevent blackberry worms, but it’s a good idea to check in with your local agricultural extension before using these on your plants.

Make sure the one you select is safe for use on food crops and only use pesticides as a last resort. There is a high risk of insecticide resistance with these plants.

There are some sprays that are approved for organic use, too, such as Spinosad. Consider these if you’re trying to stay organic.

Tips for Getting Worms Out of Blackberries

Some people recommend merely rinsing blackberries in order to get them clean. Unfortunately, while this does remove dirt, it doesn’t really do anything at all when it comes to removing blackberry worms.

You’ll need to soak the berries in cool water and add a bit of apple cider vinegar. This will help remove dirt and pesticides, if any were used, along with the worms.

Once the berries are in the bowl, use your hands to gently swish the berries around. You’ll likely see worms floating to the top. Drain them once, then soak again before you dry the berries. With any luck, this will take care of your blackberry worm problem entirely.

As soon as you harvest, chill your berries. This can help kill flies or prevent the formation of larvae, if the fly’s eggs have only recently been laid. Keep the fruit at 35 degrees for around 96 hours and you should be able to get rid of these pests.

Use a Fine Mesh Filter

If you plan on using your blackberries for recipes like jam, you may want to use a fine mesh to filter the finished product before you do it. This will gather up all the larvae before they make their way into the jam.

You can also make a puree or juice out of your blackberries, ideally using a juicer, to remove larvae. The augur should keep the larvae behind.

If you don’t need to use the berries right away – and don’t mind using frozen berries for your recipes – you might want to try freezing them. This will drive most large worms to the surface of the berry. You Can then rinse or brush off the worms before you fully thaw the rest of the berries.

Easy Way to Get Worms Out of Blackberries: Ice Water and Salt!

Of course, once you know they’re there you’re inclined to want to cut every single berry into several pieces, just to make sure there isn’t a worm. But let’s be honest here. Who has the time for that?

I’ve found a much better solution. And although I can’t guarantee you’ll get every single tiny worm out, you’ll feel much better about eating your berries once you’ve successfully removed a few.

It’s pretty much the same method that you would use to remove worms from cabbage or broccoli.

Fill a sink or large bowl full of ice water, and add about 2 Tbsp to 1/4 c. salt. Dump the fresh blackberries in, and allow them to sit for about 10 minutes.

I like to gently swish them around to help loosen any die hard worms. Sometimes they will die, but stay clung to the berry. What you should see after several minutes of soaking is that the worms are floating to the surface of the water, or just below the surface.

If you don’t see any worms, either there weren’t any to begin with or you didn’t use enough salt.

When you’re satisfied that you’ve gotten all the worms possible, gently rinse the berries in cold running water. You want to be sure not to squish them so that you don’t lose much of their juices.

Then drain and use right away, or freeze for future use. I’ve been filling a freezer bag until I have enough to make a good amount of blackberry jelly. I think I’d prefer the jelly to the jam, to avoid the seeds.

Anyways, that’s how easy it is to get worms out of blackberries! Aren’t you glad you don’t have to throw them all away?!

Again, blackberry worms aren’t harmful, but there’s definitely an “ick” factor involved. If you’ve tried all the steps above and are still feeling squeamish, there’s no shame in feeding the berries to your pigs or chickens (or tossing them in the compost pile).

Have you ever found a worm in your blackberries? Do you have a different method of dealing with them?

149 thoughts on “How To Get Worms Out Of Blackberries”