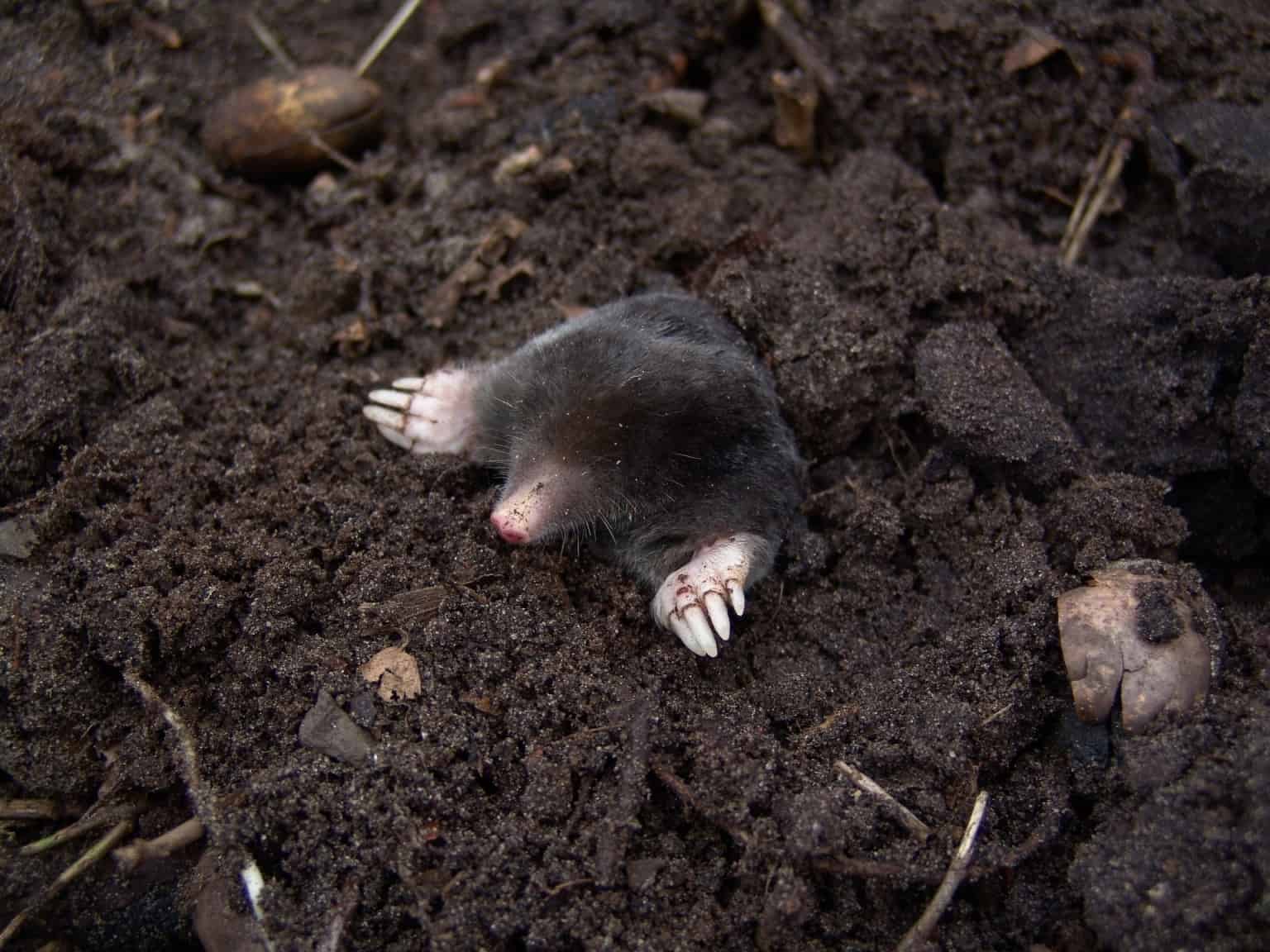 Moles, those burrowing little buggers can destroy your yard in a day. I have so many raised tunnels in my yard, we have made a game out of who can stomp them back down the fastest.

They also drive my dogs crazy. They occasionally catch one but, my yard sure gets destroyed in the process. Ahhh, I just want them pesky moles gone.

What Exactly Are Moles?

Moles are insectivores, meaning they mainly eat insects. They have a velvety fur that is grey to black in color and they grow to be six to eight inches long. They have a small hairless nose and small ears and eyes.

Moles are not blind, but have very poor vision where they mostly see light and movements. Their hairless snouts have scent sensors that detect prey and other moles. They have large front feet with long claws that do the digging on the underground tunnels.

Moles feed on insects and insect larvae. Their favorite eats are earthworms and white grubs. The moles are underground year round but are most active in the warm, wet months. They also prefer moist, sandy loam soils over dry, heavy clay soil. They also tend to live alone with the exception of breeding season, which is early spring.

This is a nasty grub worm of some sort that the mole finds absolutely delicious and will burrow your whole yard to enjoy:

Since moles generally live alone the tunnels you see in your yard are probably the work of just one or two moles. The tunnels we see are the feeding tunnels where they are digging for food.

They are constantly digging and therefore may not use the same tunnel twice. The tunnels we see are generally three to five inches across that are rounded and raised above the ground.

The main tunnel is used repeatedly and is about 12 to 18 inches underground, therefore not visible to you. You may see entry or exit mounds, which are usually round and pushed up like a dirt volcano by the mole. There is usually dirt in the hole but it is still visible. The mounds are connected to the main runways.

To fix the raised tunnels you simply step on them and smash them back down. If needed then reseed with grass seed. It will take a lot more muscle and work to fix the damage caused by a digging dog in the mole tunnels. Usually a bunch of soil and shoveling then reseeding is needed.

The damage caused by my dogs trying to dig up the mole. Now doesn’t she look proud of herself for “helping” me get rid of it:

Pros and Cons Of A Mole

Pro: The mole eats insects and larvae. By doing this they could eliminate the larvae of a destructive insect. Also, they really enjoy the nasty white grub that you find in your yard. The grub feeds on grass roots and then they turn into beetles.

Pro: The mole naturally aerates the soil, this is when the soil is pushed and moved around. Soil aeration allows for better plant growth and the soil to dry up better.

Con: Having moles attracts birds of prey such as hawks and owls. Also, they are preyed upon by fox, coyotes, and weasels. This is a problem as I have chickens and those same predators feed on chickens.

Con: The tunnels are like little booby traps. They can catch you off guard and you can step just right and really mess up your ankle. I have done this more times than I can count.

This is a piece of a tunnel under a dog box, you can see that they will burrow under anything to get a meal:

How To Get Rid Of Moles

If you are real spunky and adventurous you can try to stab them with a pitch fork while they are tunneling or set on your porch with a shotgun and see how accurate your shot is. Those methods aren’t likely to work very well though.

You can always rearrange your landscape to try to not leave space for the moles to bother. Rid your grassy areas and then the moles won’t have anywhere to go. This may mean that you need to make new walkways and make additional barriers and beds.

Of course, if you like your yard then this isn’t much of an option. Plus, this could get costly to revamp your whole yard.

Another option is to put in barriers to limit access. Physical barriers such as sheet metal or wire mesh can help repel them.

Simply bend the wire at the bottom, then bury it under the soil with the bend facing outward. This will keep the mole from getting through. Also, add fencing around your flower beds.Fencing is a barrier and it looks good.

Try not to overwater your lawn, remember they like moist soil. The watering causes to the grubs and worms to move to the top of the soil which in turn causes the moles to burrow to the top also.

It is recommended to do one good watering a week so that the worms aren’t as abundant at the top of the soil constantly. If your yard is naturally wet then you may want to consider reworking the drainage system you have in place to help dry it up to deter the moles from moving in.

Moles are said to not like certain plants, such as marigolds, daffodils, garlic and shallots. You can plant these to try to deter the mole from making an appearance in your space.

They also say castor oil is the safest non-lethal way to rid those pesky burrowers. Castor oil is all-natural and it leaves a foul smell in the tunnels. It also coats the worms leaving them with an unpalatable taste. This will cause them to leave.

Spread the castor oil around via sprayer, one quart will do about 5,000 square feet, Castor oil also comes in granules, spread the granules around your yard with a seed spreader for better coverage.

The granules will cover about 1,000 square feet for pound of granules. Follow the directions and water as recommended and your mole problem should cease. Now the smell of the castor oil will fade so you may need to reapply periodically.

Available mole repellents such as Tomcat Mole and Gopher Repellent Granules and Ready-to-spray. Both of these repellents allows for the castor oil to mix better with water so that it can penetrate deeper into the soil to help repel the menacing mole.

Mole baits are made of bromethalin, which is a neurotoxin. The baits are generally made in the appearance of earthworms or grubs, tricking the mole into eating them. The mole will die within two days.

Keep in mind that this is a poison and can be harmful to pets or other animals if ingested by them.

Using insecticides to remove the grubs from your yard doesn’t always work as the mole eats earthworms too.

The insecticides are a poison that kills insects, meaning that more than grubs can be killed and that isn’t necessarily good because some insects are beneficial to have around. Be sure to research your insecticides as some claim to kill the grub only.

Before applying insecticides be sure to read the directions. You generally need to water the yard immediately after applying the product.

Watering right after ensures proper absorption and clears it from the grass allowing the yard to be safe for your children and pets. It is important to let the yard completely dry before walking on it or allowing pets on it.

Killing grubs isn’t just for mole control as they also destroy your grass and plants. The main ingredient is the most vital part of the insecticide. There are several different insecticides to choose from for grub control, below I have listed some to make the process a little easier:

Products that will NOT kill grubs:

Some say that sound waves or vibrations can cause a mole to flee your yard. While this is not actually proven, it could be worth a shot.

These can come in the form of spikes that you insert into the ground. Press the spike into the ground and it releases vibrations and ultrasound waves that irritate the moles. There is a chance that the mole can get used to this and return.

The most efficient and humane way to rid moles is to trap them. You will need to check your state’s laws to be sure that trapping is allowed or if permits are needed to trap moles.

Mole traps will need to be moved daily to be sure that they are effective, as the moles are constantly on the move. Moles are active underground year round but they are more active and easily trapped in the early fall and early spring.

There are above ground and underground traps. The underground traps are pushed into the ground along the main tunnels and when the mole hits them the trap goes off and kills the mole instantly, no suffering occurs. There are several traps to choose from so you are sure to find one that works for you and rids those pesky moles.

These are the some of the top mole traps out there to purchase.

• Weather resistant box
• Good for all types of soil

• Humanely kills the moles
• Easy disposal
• Simple to set up

Quick tip: Don’t forget to wear gloves while working with and installing mole traps. You don’t want to leave your scent behind as the mole has a very strong sense of smell. It is not recommended that you use any kind of spray to mask your scent as the mole would notice something being different.

Lastly, for removal of ground moles you can hire an exterminator. Be sure that the exterminator does work with mole removal. This could be an expensive route to take but no work is required of you to eliminate the mole. This is also a good option if you don’t want the death of the moles on your conscious.

Good luck reclaiming your yard and keeping it your nicely manicured haven of lush grass. It will take some work and persistence but you can eliminate the borrowing nuisance that wreaks havoc on your yard.

1 thought on “How to Get Rid Of Moles For Good”