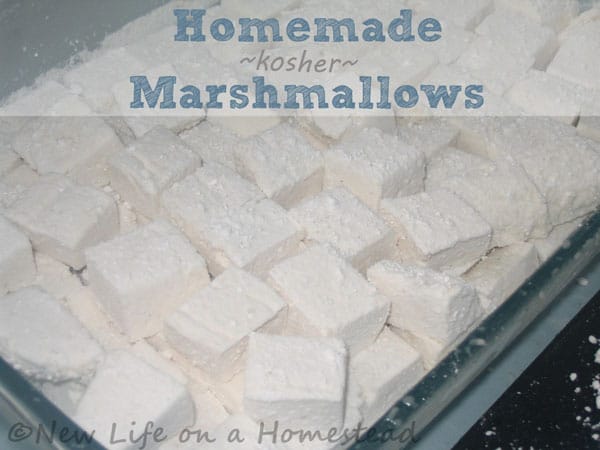 I started making these this past summer to cook over our backyard campfires, and have continued making them into the Fall bonfire season. They’ve been a huge hit everywhere I’ve taken them.

It took some experimenting to get it just right, and I had to combine a couple different recipes to suit our needs. But the final product is heavenly.

Homemade marshmallows aren’t hard to make, but they do require several hours of refrigeration before they’re ready to eat.

Step One: Make the corn syrup substitute. I don’t use corn syrup, so for this recipe it’s more practical for me to make a substitute from ingredients I keep on hand.

In a medium saucepan, combine sugar, water, cream of tartar, and salt. Stir; bring to a boil. Reduce heat to simmer, cover with a lid for 2-3 minutes. Uncover, cook until it reaches 235-240*F. Stir often. Remove from heat and allow to slightly cool.

(Note: I do not have a candy thermometer, so I eyeball it. Stirring with a wooden spoon, I test it until the syrup drips slowly off the tip of the spoon with the consistency of corn syrup.)

Step Three: Mix marshmallow ingredients and syrup together. Measure out 1/2 c. syrup and return to pot, pouring the rest into a glass container to store for future use.

To the syrup add: granulated sugar, 1/2 c. cold water, and salt. Heat over low until sugar is melted, stirring with a wooden spoon.

Bring mixture to a boil over medium (or just past medium) heat- do not stir this time. Allow to boil for about 11 min, or until it reaches 240*F.

Immediately pour the boiling mixture over the gelatin , stirring until the gelatin is dissolved.

Step Four: Make marshmallow fluff. With a standup or hand mixer, beat mixture on high until it turns white and nearly triples in volume; about 6-10 minutes.

Step Five: Don’t touch the fluff! At this point you are going to be tempted to stick your finger into the fluffy marshmallow cream for a taste. Let me just warn you, this stuff is sticky! One little touch and you’re likely to need rescuing from a web of goo. You’ve been warned.

Step Six: Add the eggs and flavoring. In a separate bowl with clean beaters, beat the egg whites until they hold a stiff peak. Pour this into the marshmallow fluff along with your desired flavoring (vanilla, almond, mint, etc). Beat all together just until combined.

Step Seven: Pour into pan. Prepare a 13x9x2 casserole dish by greasing with coconut oil (or your favorite oil); dust bottom and sides with powdered sugar.

Pour the marshmallow mixture into the prepared dish. Don’t try to spread it around, it’ll settle on its own.  Sift 1/4 c. or so of powdered sugar evenly over the top of the mixture.

Chill at least 3 hours until firm.

Step Eight: Remove and enjoy. Run a knife around the edge of the pan to loosen the marshmallow. Dump the dish upside down over a large cutting board dusted with powdered sugar. Using your fingers, gently help pull the marshmallow from the dish.

Using a knife or pizza cutter, slice the marshmallow into 1″ pieces. Roll the cut pieces into sifted powdered sugar. Store in an airtight container for up to one week.

If you’ve ever had store bought Kosher marshmallows, you’re going to love me for this recipe. They’re amazing. Plus, they melt perfectly over a fire for s’mores.