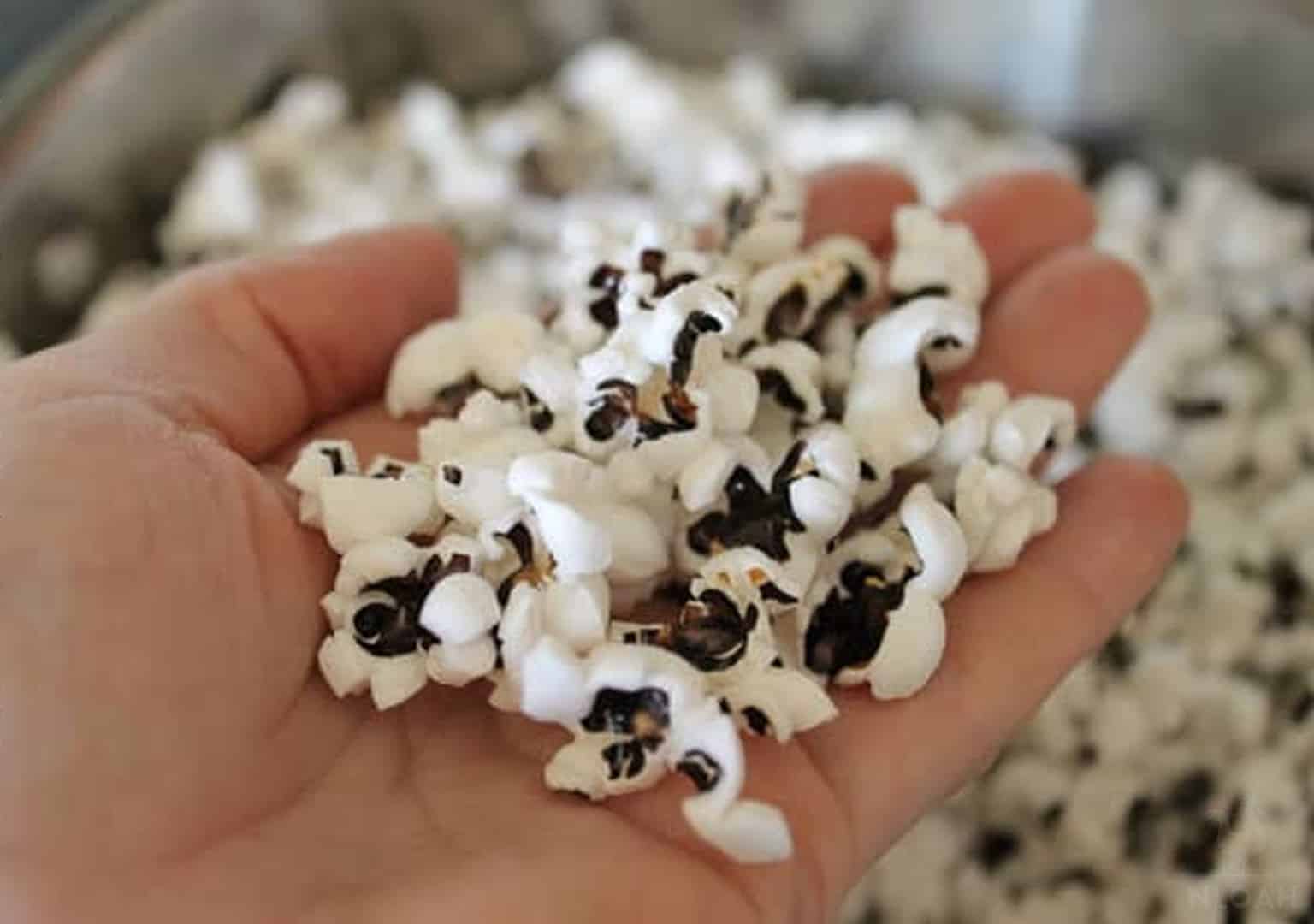 Over the summer we grew a test patch of Dakota Black Popcorn to see how well they’d do. We let the ears dry on the stalks until the husks had turned brown and brittle, then we harvested them and allowed them to continue curing indoors.

I left them in their husks placed in a basket to dry for a few months. From what I gather you’re supposed to remove their husks and hang them upside down to cure until the kernels come off easily.

There is a particular moisture content you’re seeking for best popping results. (Here’s a good article with more information on that.)

There were a couple of ears that had a little bit of fuzzy mold growing on the kernels. I think exposing them as they cure is a good idea to prevent this from happening in the future.

The kids have been begging to try our popcorn, so we sat down the other day and set to the task of shelling the corn. Boy did our hands take a beating! Those little pointed kernels are sharp.

It wasn’t until we were almost through the batch when we figured out that rubbing two ears together works amazingly well at removing the tough kernels, and made quick work of what remained.

We made such a mess, but the kids and I had a lot of fun. Next time we’ll shell into a paper bag or something to avoid crawling on the floor hunting down the little black beads that shot all over the kitchen.

The kids made little dolls with the remaining husks and cobs. I used the rest of the scraps as fire starter. Dried corn cobs make excellent fuel.

Homegrown popcorn is awesome because…

I had originally planted 30 stalks of corn. From our harvest we were able to fill a quart jar to within about two inches from the rim. The ears of this particular variety were quite small, though they filled out well.

The next test would be to see how well it would pop.

I melted 2 Tbsp of coconut oil in the bottom of a medium sized pot, then poured in enough kernels to cover the bottom, plus a little more.

After placing the lid on the pot, I kept it at medium heat until I started to hear popping, shaking the pot back and forth by the handle every now and then.

Once the kernels started popping I turned the heat down to medium-low, continuing to shake the pot  several times per minute.

When the popping slowed I took the lid off the pot, and gave it all a stir. When the pot was full I removed it from the heat and poured the kernels into a bowl to prevent scorching on the bottom.

The kernels looked burnt, but the dark bottoms you see are what remained of the dark red kernels. They were very good without any additional flavoring, but I still drizzled them with melted butter and sprinkled lightly with salt. Perfection.

I was pleased to find that our kernels had a much better success rate of popping than store-bought kernels we’ve used in the past. There were hardly any unpopped kernels leftover in the pot.

It took about a pint of kernels (or half my jar) to provide enough popcorn for five of us to snack on. We’re going to have to plant a whole lot more than 30 stalks this year if we want more popcorn than 2 snacks worth!

Have you ever grown popcorn? What’s your favorite variety?

18 thoughts on “How to Pop Homegrown Popcorn”