This is hay. Fresh hay is greenish. This is what you feed the animals. You’d give this to the animals in place of letting them graze, like in the winter time when the grass isn’t growing. It costs about $3 per square bale of hay. 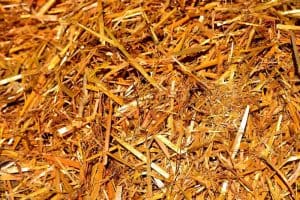 This is straw. It’s a yellowish color. This is used as bedding for the animals. It also costs about $3 per square bale, depending on where you get it of course. (We got some old straw for like $1 per bale a while back, so it can be pretty inexpensive to buy.)

Sometimes I forget which is used for what, and then I remind myself of the childhood saying, “Hay is for horses”! And then I remember that hay is for feed.

So, there you have it. And you don’t even have to feel silly asking anybody!! Now you know.