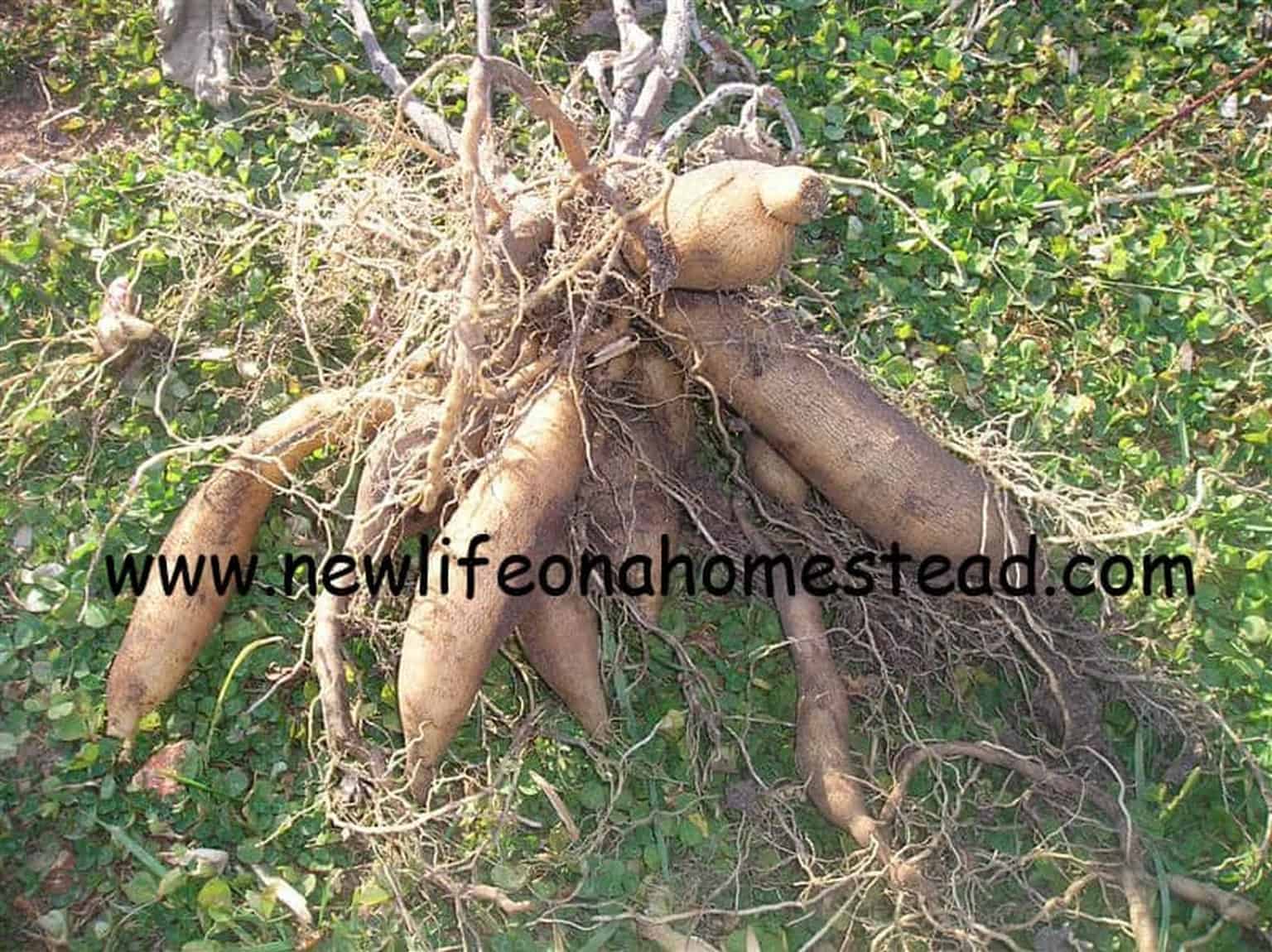 What is yacon? It’s a question I asked myself before I ever even tasted the crisp, apple-like tuber.

And though it’s still relatively unknown in North America, this Peruvian native has been gaining popularity in recent years as a dietary supplement and natural sweetener. Prized for its prebiotic qualities and low calorie content, yacon can be harvested fresh or dried and enjoyed all year long.

Wondering how to grow yacon – and perhaps most importantly, how to harvest it to preserve its flavor for all of your favorite recipes?

Keep reading to find out everything you need to know!

What is the Yacon Root?

The Yacon root is a tuber that is native to South America and countries like Ecuador and Colombia. It is a plant of many names, going by other monikers like Bolivian sunroot and Peruvian ground apple.

It has a long, thin shape and a dark brown skin. The flesh of the Yacon root is white or yellow in color and has a sweet, slightly sticky texture. It is similar to a sweet potato in terms of its taste and yield but I also think it’s similar to foods like Jerusalem artichokes or even sunflowers!

The yacon perennial has a high concentration of fructooligosaccharides (FOS), which are prebiotic fibers that nourish the good bacteria in your gut. This snack is one that’s great for digestion!

It is often used as a sweetener in South American cuisine, as it contains high levels of fructose. It’s a great alternative for diabetics, since the sugars are more easily processed, and yacon tubers are also low in calories.

The Yacon root is also known for its many other health benefits, as it is rich in fiber and antioxidants.

Additionally, the Yacon root has been shown to boost metabolism and promote weight loss. As a result, it is becoming increasingly popular as a natural health supplement.

Yacons are relatively easy to grow in well-drained, organically rich soil in full sun to partial shade. They can be grown in most climates. They are tolerant of a wide range of soil types but prefer a moist, sandy loam.

If you live in an area with clay soil, you can improve drainage by amending the planting bed with organic matter prior to planting.

Yacons are sensitive to frost and should be planted after all danger of frost has passed. In warm climates, they can be planted in early spring or fall.

Yacon plants do not require much fertilizer and too much nitrogen can result in lush foliage growth at the expense of root development.

If you choose to fertilize, do so lightly using an organic compost or balanced fertilizer applied according to package directions. Excessive fertility will also promote weed growth so it’s best to err on the side of caution.

I harvested my Yacon a few days ago. After writing my post about planting Yacon, I learned that a friend of mine is also growing some.

When I went to visit her the other day, she asked me if I’d harvested from my plant yet. I hadn’t. Actually, I was debating on just leaving it alone through the winter, which she advised against.

She showed me the nice sized harvest from her many plants, and she even peeled one of the well aged tubers right there and let me have my first taste of Yacon.

The taste and texture were very different from any type of tuber I’ve sampled. It had the crunch of a crisp apple, with the mild sweetness of a melon. Very refreshing.

My friend explained that in order to get the best flavor, you must allow the tubers to sit in a somewhat cool and dry (not the fridge) environment until they start to shrivel and look “ugly”

After probing her for how exactly I should go about storing the tubers, and the crown which I will use to grow more plants in Spring, I was confident enough to go home and dig up my own Yacon plant.

How to Tell When Yacon is Ready to be Harvested

When yacon is ready to be harvested, the leaves will begin to yellow and die back. The roots can then be dug up and eaten fresh or cooked.

Yacon plants have yellow flowers – these should be gone by the time you are ready to harvest.

Separate the Rhizomes from the Tubers

It had died back completely, so all I had to do was gently pull the plant from the loose soil in its pot.

And here is my first harvest! I was actually quite delighted to have this many tubers in the pot I was growing my plant in.

Yacon root tubers can be a bit of a challenge to clean, but it’s definitely worth the effort.

In order to clean yacon root tubers properly, you will need to scrub them vigorously with a brush. This will help to remove any dirt or debris that may be clinging to the surface. Once you have scrubbed the tubers, you can rinse them off with cool water. Make sure to pat them dry before storing them.

You can even save yacon crowns for propagation later on.

If you’ve ever propagated other plants, like a strawberry plant from a runner, you shouldn’t have too much trouble doing the same with your yacon roots. You just need to store the crowns over the winter.

You can store the crown in slightly moist sand, in a cool dry place until 2-3 months before your last frost date. I didn’t have any sand, so I just put the crown in a bucket of compost and placed it in a cool (no warmer than about 50*) and a dark place.

If it starts sprouting, then I may divide the crown and put it in a growing medium in our greenhouse. It’s all experimentation at this point.

When to Harvest Yacon Root

For best results, yacon root should be harvested in the fall, after the leaves have died back.

The tubers can be difficult to dig up, so it is important to use a sharp spade or shovel. This will prevent you from severing the base of the stem.

I’ve found that it can be tough to harvest yacon in compacted soil, since the depth at which the roots grow is often inhibited by heavy soils.

Make sure your soil is light and airy and consider putting mulch around your plants to make it easier to harvest your plants!

Can You Leave Yacon Roots in the Ground?

Unlike other root vegetables, yacon can be eaten raw or cooked, and the roots can be left in the ground for an extended period of time without rotting.

However, there are a few things to keep in mind if you plan to leave yacon roots in the ground. First, yacon roots are susceptible to pests and diseases, so it is important to keep them well-watered and free from debris.

Second, yacon roots should be planted in well-drained soil to prevent them from sitting in water and becoming waterlogged.

Finally, yacon roots will need to be harvested before the first frost of winter, as they will not survive being exposed to freezing temperatures. With these considerations in mind, you can successfully leave yacon roots in the ground for an extended period of time.

How Long Does Yacon Last in Storage?

When stored properly, yacon will retain its freshness and flavor for up to twelve months.

To extend its shelf life, yacon should be stored in a cool, dry place. If you plan on storing it for longer than six months, it’s best to keep it in the refrigerator.

With proper care, yacon can be a delicious and nutritious addition to your diet for many months to come.

How to Use Yacon Root

Yacon root can be stored in the refrigerator for up to two weeks.

To prepare yacon root, wash it thoroughly and then slice it into thin pieces. It can be eaten raw or cooked. When cooking yacon root, steam or bake it to preserve its nutrients.

Yacon root is a versatile ingredient that can be used in many recipes. Try adding it to smoothies, salads, or baked goods for a touch of sweetness.

Here are some ways to use yacon root in your kitchen:

If you’re looking for a healthy and delicious way to add more fiber to your diet, look no further than yacon. This sweet root vegetable is loaded with antioxidants, vitamins, and minerals, making it the perfect addition to any meal.

And because harvesting a yacon is so easy and doesn’t require any special tools or equipment, there’s no excuse not to give it a try!

I’m excited to have harvested a few good sized tubers of yacon!! In several weeks they should be sweet enough to enjoy raw.

Do you have any experience harvesting Yacon?

5 thoughts on “Harvesting Yacon: What You Should Know”

"Hi! I'm Kendra. I'm a wife, mother, and homesteader. I love everything that has to do with simple living. I'm a canning instructor, an avid gardener, and a constant learner of old-fashioned skills. Here is where I share it all. Welcome to the adventure!"
How To Grow Vegetables Indoors - The Ultimate Guide
How To Bale and Store Hay
17 Plants Highest in Saponins
Growing Cilantro Step by Step
How To Grow Mustard Greens From Seed