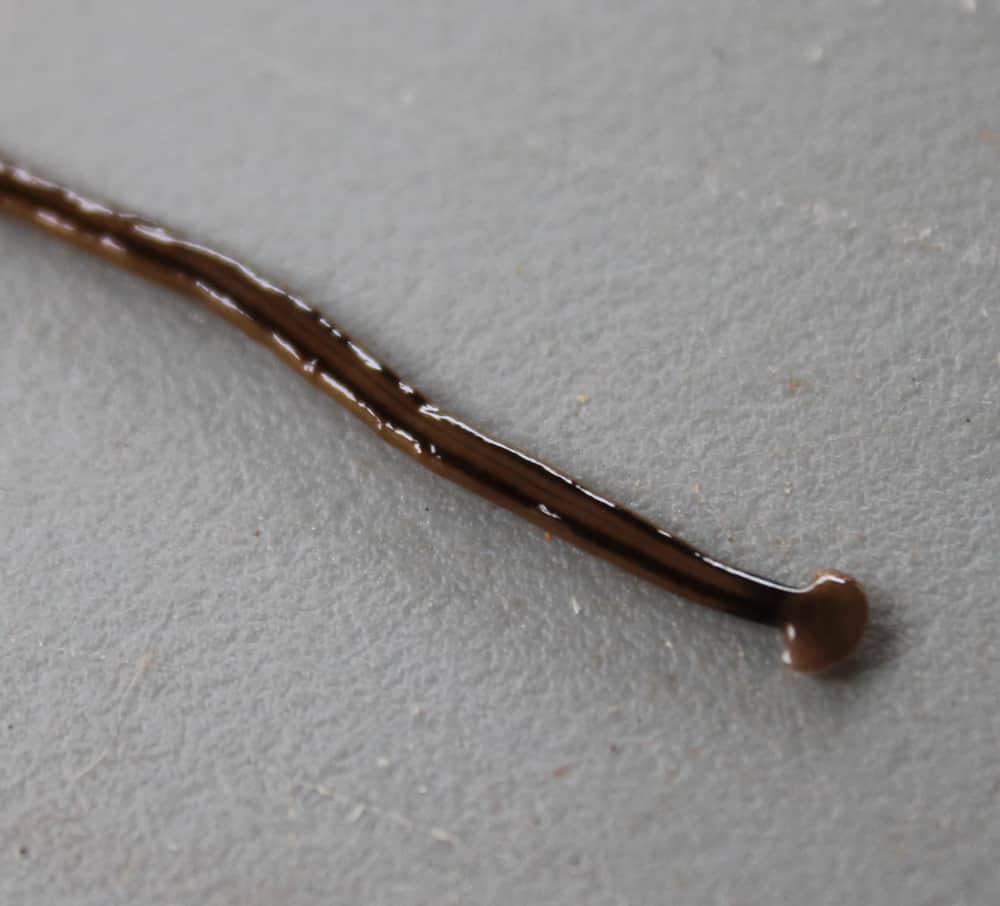 My youngest daughter was playing outside, rolling over logs and railroad ties trying to find bugs to catch, when she discovered a funny looking worm. She studied it for a minute, and then brought it to me in great excitement.

Mommy! Look at this funny worm I found!

I was just as fascinated as she was. As it inched along, it stretched from just a couple inches to nearly six inches long!  What a strange worm, I thought. It’s head resembled that of a hammer-head shark.

Of course I set straight to researching what it was. Not really knowing what to look up, I googled “hammerhead worm”. Sure enough, Wikipedia has a whole article devoted to Bipalium, loosely referred to as the “hammerhead worm”.

What I found out next wasn’t so exciting.

What Are Hammerhead Worms?

The hammerhead worm, the full name of which is Bipalium kewense, is a hammerhead flatworm or land planarian. Its head looks just like a hammerhead shark, as I mentioned. These worms are massive, with some growing to 20 inches long. Most, however, will only grow to about an inch – at least that’s a nightmare to save for another day!

Hammerhead worms secrete thick, dense mucus from their undersides as they move. Some hammerhead worms have stripes, but others do not. They can be found in shades of black, gray, orange, or brown. Sometimes, you might hear hammerhead worms referred to as shovelhead or arrowhead worms. They are frequently found in caves.

Hammerhead worms are often called hammerhead slugs. To be fair, they look a lot like slugs as they move in a slug-like fashion. The cilia on their creeping soles help them glide, and they leave behind a thick string of mucus just like slugs, too.

Other names for hammerhead worms include:

They’re also called the Broadhead Planarian, but the broadhead planarian is a flatworm family. Hammerhead worms are just one member of that family.

Where do Hammerhead Worms Come From?

Hailing from southeast Asia and Madagascar, hammerhead worms tend to prefer humid tropical and subtropical climates. They’ve been reported across the USA since the1980s, but they’ve been around since the early 1900s, arriving in shipments of exotic plants from Asia and Madagascar. These worms have been found in many states including:

They are typically found on the Gulf Coast due to its warmer climate; they are also often found in nursery plants and greenhouses in colder regions of the USA.

If you’re a landscaper then you’re probably carrying a lot of soil and/or plants around to be used in your work. Hammerhead worms typically stow away in these things and then hide themselves under rocks, leaves, and logs, keeping out of the sun.

Big Trouble for Your Garden

Although they’re harmless to people, they can be devastating to a garden. Hammerhead worms are considered an invasive species. They prey on earthworms, and can completely decimate a garden if they aren’t taken care of.

Supposedly, if you try to squish them or cut them they’ll multiply and grow into more worms. And other animals don’t like to eat them because they secrete a foul tasting slime – which means they have no known predators.

Great. Another garden pest to worry about.

However, it’s important that you take the time to worry about them. Earthworms are so crucial in any garden because they help fertilize and aerate the soil.

Without them, the soil health will deteriorate and you won’t have much of a garden. Hammerhead worms, particularly a severe infestation of hammerhead worms, can completely ruin you garden’s success.

Not Kid or Pet-Friendly

Hammerhead worms aren’t toxic to people, but they are toxic to other creatures because of their neurotoxins.

They also have nasty parasitic nematodes in them which cause extra trouble by causing diseases in humans and animals – some of which can be deadly.

That being said, while it’s perfectly safe to touch or interact with a hammerhead worm, we don’t recommend it. The chemicals they release when handled can cause some nasty skin irritation. If you must handle them with your hands, please wear gloves.

If you don’t have gloves, use paper towel or a stick, and make sure that you wash your hands in soapy water and rinse them in disinfectant or alcohol when you’re done.

It’s also not a good idea for you to eat them as these planarians contain tetrodotoxin, the same kind of toxin found in pufferfish, rough-skinned newts, and blue-ringed octopus.

If ingested, hammerhead worms can cause nausea – if you’ve got kids and/or pets, this is something you’ll have to keep in mind. Tetrodotoxin produces a variety of symptoms other than nausea including lethargy, paralysis, and seizures.

How do Hammerhead Worms Eat?

They make earthworm shakes – I wish I were kidding. Earthworms are their favorite snack. They track their meal using chemoreceptors in their heads. Once they’ve found a morsel, they grab it and use their potent neurotoxins to paralyze it.

Once it’s been paralyzed, they dissolve the earthworm or whatever prey item they’ve caught and slurp it up like a milkshake or slush puppy. Isn’t that lovely?

What to Do About Hammerhead Worms

As I mentioned, you can’t get rid of hammerhead worms by squishing or cutting them. They will regenerate into new worms when you cut them into pieces, so you will only make your problem worse by reacting with this sort of violence!

They are hermaphrodites, with each worm possessing both types of reproductive organs. The worms reproduce via fragmentation, leaving behind a tail tip stuck to a leaf which then turns into an adult. It only takes a few weeks for the pieces to regenerate, and injured worms can easily repair and produce new tissue.

The best way to kill hammerhead worms is to fill a spray bottle with citrus oil. This is often sold in the cleaning aisle at your local grocery store, although you can also make your own at home.

Here’s the deal – you can’t kill hammerhead worms by simply spraying citrus oil in your general garden area. You have to spray each and every worm until your population is dead.

Designate a certain day of the week – and a time – to spend in “hammerhead hunting.” Go out first thing in the morning, ideally after a heavy rainstorm and before sunrise (they’re light sensitive and prefer hunting in the dark) when the worms will rise to the surface of the soil.

Spray the worm until it is completely soaked in citrus oil. If the worm is on a plant or leaf, knock it on the ground so you don’t hurt your plant.

You Can Also Use Salt or Vinegar

You can spray with citrus oil as often as you’d like, but keep in mind that you will need to do this at least once a week to control the population. If you’re unsure of whether you’ve killed off all the hammerhead worms, check for eggs.

These look like tiny black or red cocoons – the cocoons will be filled with eggs. These should be removed and destroyed immediately.

If citrus oil doesn’t seem to be doing the trick, you can also try using vinegar or salt. These, like citrus oil, need to be applied directly to the hammerhead worm in order to be effective. Use a spray bottle or simply pour the ingredients directly on top of the worms to dissolve them.

You can also use neem oil, boric acid, soapy water, and/or certain pesticides to get rid of them.

Don’t think you’re immune just because you live in a cold environment, either. These creatures can establish themselves in a greenhouse and disperse quickly into the surrounding area.

In a cold climate, they can survive freezing and below freezing temperatures by hiding out in protected locations.

We’ve been collecting them in a jar and sprinkling salt over them, which kills them very quickly.

I thought I’d share so you guys can be on the lookout for hammerhead worms around your home and garden. If you find one, sprinkle it with salt or drown it in a jar of water.

Have you ever seen a hammerhead worm? Are they a problem in your garden? Be sure to pin this article to your Pinterest so you know where to look should this pesky pest ever pay you a visit.

54 thoughts on “A Garden Bad Guy: The Hammerhead Worm”