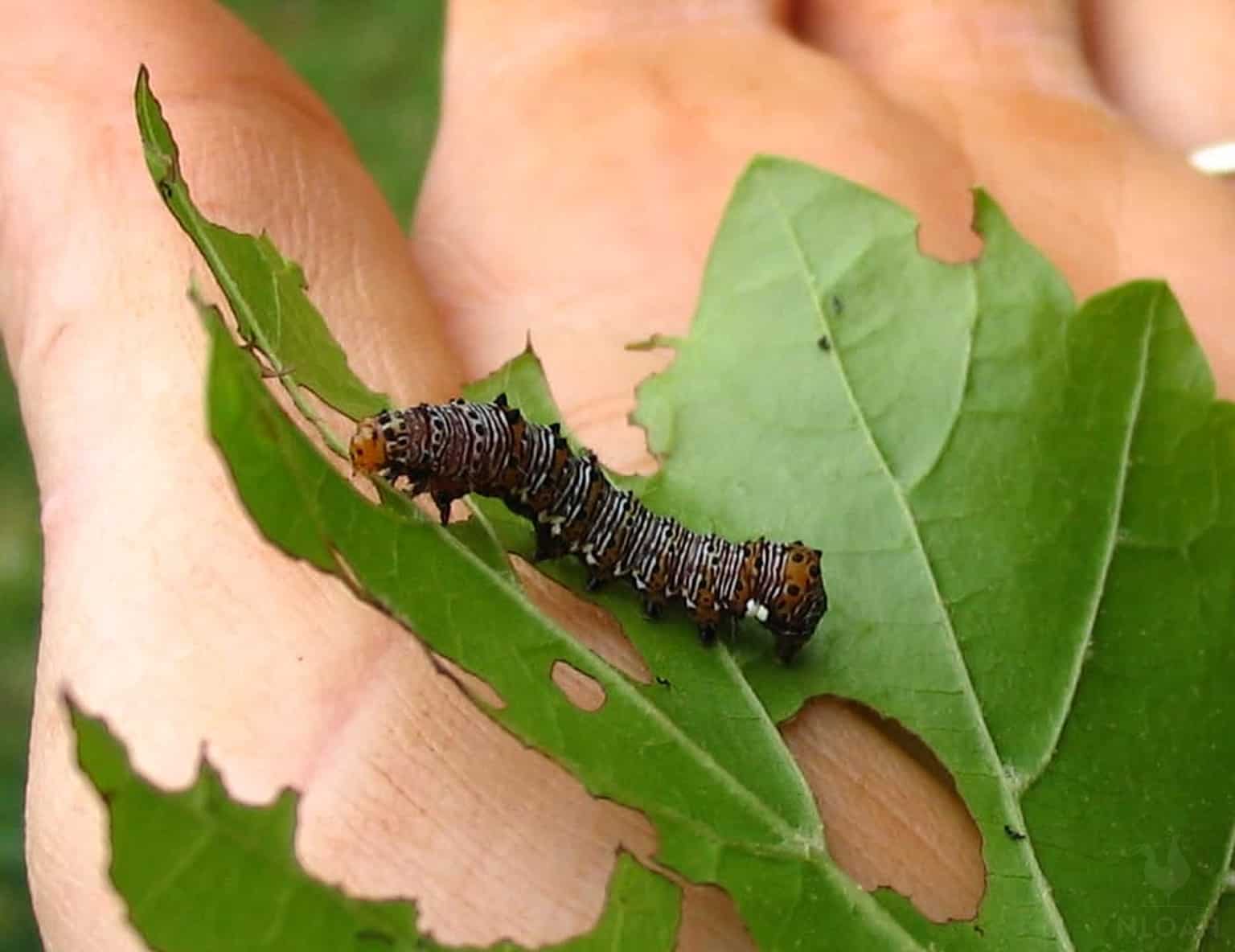 I’ve learned that it’s a good habit to walk around the garden every day or two to examine all of your plants up close.

Pest and disease problems seem to spring up overnight, and the earlier you catch them, the better your chances of saving the harvest.

Today, as I walked around the yard looking things over, I noticed something going on with my grape vines that I didn’t like the looks of.

Holes. In my leaves.

A closer look revealed the culprit. Little tiny larvae like the one you just saw…

I immediately grabbed my pruning shears and a bucket, and set to work clipping and removing all of the leaves that had larvae or any evidence of them.

It’s important to collect the leaves in a container and dispose of them properly (ie: the burn barrel), or else the larvae will just grow, multiply, and return to your plants.

Dutifully, I went through all of the vines, lifting leaves and examining the undersides, trying to find as many pests as possible. And then I came across this guy:

This is a European Grapevine Moth:

I looked it up, and found this alarming information:

In May and June, first-generation larvae web and feed on the flower clusters. Second-generation larvae (July-August) feed on green berries. Young larvae penetrate the berry and hollow them out, leaving the skin and seeds. Third-generation larvae (August-September) cause the greatest damage by webbing and feeding inside berries and within bunches, which become contaminated with frass (excrement).

This is so not good. We’ve never had these moths before. In the past, our main grapevine pest has been June Bugs (Japanese Beetles), but at least they only eat the leaves of the vines and leave the fruit alone. From the sound of it, grapevine moths decimate the entire plant.

The European grapevine moth (EGVM) is a destructive pest that affects grapevines. First discovered in Europe, this little moth has since made its way to North America, where it has become a serious problem for grape growers. They’re a relatively new pest in the US, first spotted in California in 2009.

If you have EGVM in your garden, it’s important to take steps to get rid of it as soon as possible. Here’s what you need to know about this pesky little moth and how to get rid of it.

What Are the Caterpillars on My Grapevine?

Without a doubt, the European grapevine moth caterpillar is the most common type of caterpillar you’ll find on your grapevines. However, there are a few other pests you may want to be on the lookout for.

The larvae then move to the grape clusters, where they feed on the fruit for about two weeks before pupating. The adult flies emerge a few weeks later and lay their eggs on the leaves, starting the cycle over again.

While Endopiza viteana is not as damaging as some other pests, it can still cause problems for grape growers if left unchecked. In particular, this pest can reduce yields and produce fruit of poor quality. If you think you may have Endopiza viteana on your grapevines, be sure to contact a professional for assistance.

These caterpillars are small, but their voracious appetite can quickly destroy a crop. The first signs of infestation are usually small holes in the leaves of the vine. These holes are caused by the caterpillars feeding on the plant tissue.

As the infestation worsens, more and more leaves will be eaten, and the caterpillars will begin to feed on the fruit as well. This feeding can cause deformities and render the grapes unmarketable. European grapevine moth caterpillars can also spread diseases to grapevines, further compromising the health of the crop.

What Are European Grapevine Moth Caterpillars?

The European grapevine moth is a small moth with a wingspan of only about ½ inch. The top of the moth’s body is brownish-gray, while the bottom is whitish-gray.

The most distinguishing feature of this month is the row of dark spots on its wings. Male moths also have feathery antennae, while females do not.

EGVM larvae are small, yellow-green caterpillars with brown stripes running down their backs. These caterpillars are very destructive and feed on grape leaves, stems, and fruit.

Feeding damage appears as small holes in leaves or as damaged fruit with brownish winding tracks through the flesh. In heavy infestations, vegetation can be completely skeletonized, and fruit can be completely ruined.

Even if the fruit isn’t heavily damaged, it can still be affected; grapes infested with EGVM larvae are often smaller and have a lower sugar content than healthy grapes.

Why Are Grapevine Moths a Problem?

The adults are small moths with brownish-gray wings. They lay their eggs on the leaves or fruit of grapevines in late spring or early summer.

From eggs that were laid in the prior season and overwintered. The eggs hatch into caterpillars that feed voraciously on grape leaves for several weeks.

As they grow, they molt four times. When they reach maturity, the caterpillars spin silk cocoons and pupate inside them. After about two weeks, the adults emerge from the cocoons and mate. The females and males fly at dusk to find each other, with mating occuring in flight.

Adult moths only live a few weeks, but the pupae and larvae can cause extensive damage.

Because of its wide host range and rapid reproduction, the EGVM is difficult to control.

What Else Do They Eat?

The European grapevine moth is a voracious eater, and it can have a devastating effect on crops. The moth primarily feeds on grape plants, but it will also attack berries, carnations, cherries, currants, lilacs, nectarines, and plums.

The moth is most commonly found in agricultural areas with dry climates, such as the wine-growing regions of California.

When the moth attacks a plant, it chews through the leaves and fruit, causing extensive damage.

The first generation of caterpillars attacks the flower clusters, while the second generation feeds on green berries. The third generation is by far the most destructive, feeding on ripe berries and contaminating them with their waste.

How Do I Get Rid of Grapevine Caterpillars?

If you think you might have EGVM in your garden, it’s important to take action right away. These moths are very difficult to control once they’ve become established, so early detection is key.

You may want to introduce natural predators into your garden. Ladybugs, lacewings, and parasitic wasps all feed on caterpillars and can help to control their population. Some species of spiders can also help to control populations of the European grapevine moth caterpillar, too.

Be Vigilant With Inspections

Hand-pick the caterpillars from your grapevines. This is the most labor-intensive method, but it is also the most effective. Check your vines on a daily basis and remove any caterpillars you find.

When you inspect the plants, make sure you destroy the egg masses of the grapevine caterpillars. Egg masses are typically found on the underside of leaves and can contain up to 100 eggs each.

Apply Bacillus thuringiensis (Bt) to your grapevines. Bt is a biological insecticide that is effective against caterpillars. It is available in both liquid and powder form.

Use an insecticidal soap on your grapevines. Insecticidal soaps are effective against a variety of pests, including caterpillars. Be sure to follow the instructions on the label carefully.

Apply neem oil to your grapevines. Neem oil is a natural insecticide that is derived from the neem tree. It is available in both liquid and powder form.

Set up a trap for the caterpillars using pheromone traps. Place pheromone traps in your grapevineyard to capture adult male moths before they can lay eggs. Pheromone traps use a synthetic version of the female moth’s sex pheromone to attract males, which are then trapped in the trap.

Give Row Covers a Shot

Use row covers to prevent adult moths from laying eggs on your grapevines in the first place. Row covers are pieces of fabric that are placed over rows of plants to create a physical barrier between the plants and the outside world.

There are a number of different grapevines that are resistant to caterpillars. One variety is the riesling grapevine, which is native to Germany. Riesling vines are particularly resistant to the larvae of the European grapevine moth, which can cause extensive damage to grapevines.

Another variety is the muscadine grape, which is native to North America. Muscadine vines are resistant to several species of caterpillars.

Finally, the Madeira wine grape is a hybrid variety that is resistant to both the European grapevine moth and the common grape vine caterpillar. Madeira wine grapes are grown in Portugal and are used to produce a sweet dessert wine.

After doing a little more reading, I’ve learned that supposedly Stink Bugs (aka Shield Bugs) are predators to the Grapevine Moth larvae, and lucky for us- we’re infested with Stink Bugs!

I’ve instructed the kids to put as many as they can catch on the grapevines. In the meantime, I’ll be hand picking any and all damaged leaves and baby moths that I can find on my vines.

The European grapevine moth (EGVM) is a destructive pest that affects grapevines. If you have EGVM in your garden, it’s important to take steps to get rid of it as soon as possible using a combination of insecticidal sprays, pheromone traps, and other methods. With time, you can eradicate this frustrating pest – just be patient!

Have any of you ever dealt with Grapevine Moth Moths? What have you found to work best for you?

"Hi! I'm Kendra. I'm a wife, mother, and homesteader. I love everything that has to do with simple living. I'm a canning instructor, an avid gardener, and a constant learner of old-fashioned skills. Here is where I share it all. Welcome to the adventure!"
How To Grow Raspberry Bushes in Raised Beds
How and When To Harvest and Store Carrots
5 Reasons Weeds Are Bad For Your Garden
My First Garden: 9 Weeks Later
How To Grow Lavender in Your Garden