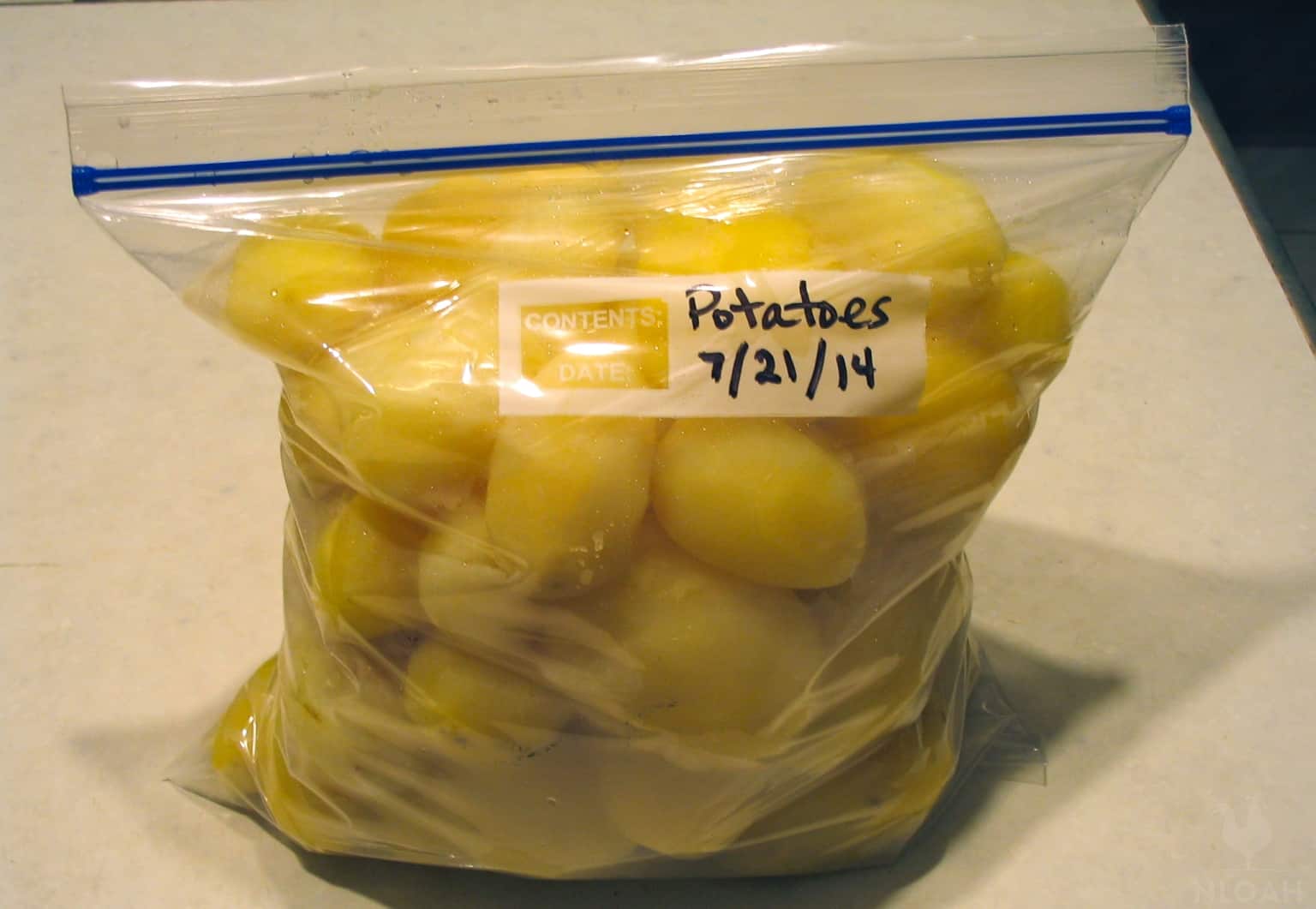 Yesterday, my oldest daughter and I spent a good chunk of the day peeling potatoes. This wonderful potato harvest has made me realize how important good potato peelers are.

I’d like to buy a few extras to keep on hand, so we can all peel them together as a family as the little ones get old enough to handle a peeler safely.

Freezing is a great way to preserve an excess bounty of these tasty spuds. Potatoes grow prolifically, which you likely already know if you have a garden on the homestead.

While canning potatoes is a great way to preserve your leftovers (and you can also keep potatoes for quite some time).

While you ultimately will need to take more time to thaw and cook your frozen potatoes, freezing them is a great way to preserve them if you don’t have the time to dedicate to preparing a canner load.

I planned on canning them once they were peeled, but life got in the way and it didn’t happen. I had to get the potatoes put up before I went to bed to keep them from spoiling.

Sometimes I’ll cover peeled potatoes with cold water and place the bowl in the fridge overnight, which works great for keeping the spuds from browning.

But my bowl was much too big to fit, and I didn’t have room in the fridge regardless. I decided I’d make it easy on myself and freeze this batch.

When you’re freezing potatoes – or preserving them in any way, really – the most important thing to remember is that you must choose high-quality produce.

Pick potatoes that are at the peak of their growing season, and keep in mind that this varies depending on the species and variety of potato you have chosen. You want a potato that is firm and has no bruises or sprouts.

When deciding what kind of potato to freeze, keep in mind that waxier potatoes tend to hold up better under the extreme cold than other varieties.

The best options to consider? Red Skins and Yukon Gold. These will freeze nicely and cook evenly once they are thawed.

It’s also best to pick potatoes that have very few spots where the skin has been peeled back or removed.

Even though you will peel them anyway, potatoes that have damaged skin may be susceptible to other issues like diseases or pests, so you don’t want to put yourself at risk for any foodborne illnesses by choosing iffy spuds.

How To Freeze Potatoes

First, peel your potatoes and place them in a bowl of cold water. Be sure they aren’t poking up out of the water, or the spot exposed to air will turn brown:

I actually don’t wash my potatoes before peeling them, as I’ve found it isn’t necessary. The potatoes will be washed again after being peeled. If your potatoes are considerably large, consider chopping them into small pieces.

They will store better if they are able to cook evenly. This is more difficult with large spuds.

If you come across any green on the potatoes this is where the skin was exposed to the sun; peel it away- it can make you sick.

Green skin on potatoes is caused by light exposure and often happens when you store potatoes in improper conditions, like on the window sill.

It can also happen when you don’t mound your potatoes properly during the growing process.

When potatoes are exposed to light, triggering the chlorophyll pigmentation, they also increase their production of (invisible) solanine alkaloid.

This solanine is incredibly toxic and can make you extremely sick. Make sure you never eat the green parts of potatoes – it’s not worth it.

Next, bring a large pot of water to a full rolling boil. Give the peeled potatoes a second rinse, then carefully put them in the boiling water and allow to blanch for 3-5 minutes.

(I lean toward three minutes for less mushy potatoes.) Make sure you have enough water in the pot to completely cover the potatoes.

Using a slotted spoon, quickly remove the potatoes from the boiling water, and plunge them into a bowl of icy cold water to stop the cooking process. Allow to sit for 5-10 minutes. Add more ice cubes, or replace the water as needed to keep it cold.

Drain, allow to completely cool, then fill freezer bags with the blanched potatoes. Don’t forget to label them with the date. They’ll stay good for several months as long as they’re sealed well.

If you are unsure whether those potatoes you canned last season are still safe to eat, take a close look. Signs a potato has spoiled include green coloring or other discoloration.

Sprouts are another sign – these generally indicate that a potato’s starch has begun to convert to sugar. Shrinking, wrinkling, and a loss of firm texture are also indicative of spoilage. Mold growth, too, is another indicator of rotting food.

However, in the freezer, these signs can be delayed or difficult to detect. Pay attention to discoloration and dullness, as well as the formation of ice crystals.

If the package of potatoes has begun to leak, or if there is a rancid odor, these are also signs that something has gone bad.

If you have the option, consider using a vacuum seal system like FoodSaver. Freezer bags generally work just fine, but if you are able to remove all the air, your potatoes will store for much longer and you’ll be less likely to have potatoes develop with ugly brown spots.

Vacuum sealers remove all the air so you don’t have to think twice about storing them in the freezer for long periods of time.

If a vacuum sealer isn’t an option, again – no need to panic. Freezer bags work just fine. You can actually use a more primitive method to suck out extra air.

Simply insert a plastic straw into the opening of the bag after closing the zippered bag nearly all the way.

Suck out the remaining air using the straw, and then withdraw the straw once the air is out. This way, frozen potatoes will last for up to a year.

Can You Freeze Raw Potatoes?

Now, many people wonder whether they can also freeze raw potatoes. This isn’t as effective a method as freezing blanched potatoes for several reasons. Raw potatoes have a high water content, which can make them challenging to freeze.

When you thaw them and cook them either by boiling or frying them, they can become discolored and mushy. That being said, it can be done. You need to choose younger, fresher potatoes (older ones are more likely to become mushy). Waxy potatoes also tend to work best for this purpose.

I mostly use frozen potatoes for quick mashed potatoes. Thaw in the fridge overnight. Alternatively, you can also chop them into fries and freeze them that way.

Leftover cooked potatoes can also be frozen and thawed at your convenience. Except for potato salad. That doesn’t work so well.

That being said, potatoes used for soaps, potato pancakes, dumplings, stews, and more are absolutely delicious and you can’t tell the difference between fresh and frozen varieties.

Try not to freeze and thaw potatoes more than once. This can cause them to become mushy when reheated and they will lose a lot of their delicious flavor.

While potatoes frozen once don’t sacrifice texture or taste, those that have frozen multiple times are unpalatable.

If this batch of potatoes doesn’t end up too soft, I may try quickly reheating them in boiling water and canning them today. If I get the time. That’s a big “if”.

Do you freeze potatoes? What’s your favorite way to use them?

21 thoughts on “How To Freeze Potatoes”

"Hi! I'm Kendra. I'm a wife, mother, and homesteader. I love everything that has to do with simple living. I'm a canning instructor, an avid gardener, and a constant learner of old-fashioned skills. Here is where I share it all. Welcome to the adventure!"
How to Freeze Horseradish Step by Step
How To Freeze Corn - Blanching Method
Freezing Leftover Spaghetti
How to Dehydrate Eggs Step by Step
Can You Dehydrate Jello / Gelatin?