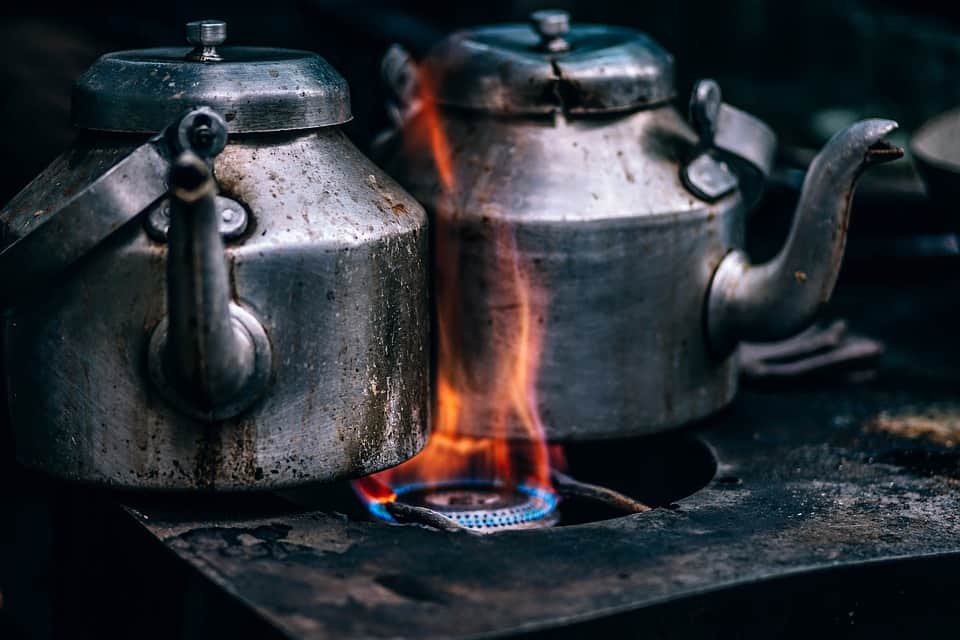 I cook a lot, and luckily, I’ve never had any kind of fire while I’ve been enjoying my time in the kitchen.

Most people can’t say the same, though. In fact, according to statistics by FEMA, from 2014 to 2016 alone, fire departments responded to an average of nearly 189,000 cooking fires in residential buildings.

On average, those fires caused 195 deaths per year along with thousands of injuries and millions of dollars’ worth of damage.

Unfortunately, many of those losses could have been lessened – or even eliminated altogether – had people followed some simple tips when handling and preventing kitchen fires.

There are some easy ways to put out a kitchen fire – here’s what you need to know.

The easiest way to stop a kitchen fire? Don’t start one.

One of the most common ways that kitchen fires start is from your own clothing. It’s a good idea not to wear your fancy, billowy clothing while you’re cooking. Instead, wear safer clothes.

You also need to watch the food you are cooking. Anything greasy has the potential to cause fire as it emits grease that splatters and pops.

Always pay attention to the stove and oven while you’re cooking. Whatever you do, don’t fall asleep!

If you can, keep grease at the recommended temperature and use a thermometer to keep track of this. Remove moisture from your food before cooking it – and never put frozen food directly into hot grease.

When you add food to a pan, make sure you do so slowly and gently to prevent splatter.

Also, avoid using plastic or glass anywhere near the stove.

How to Put Out a Kitchen Fire

When you open it you allow oxygen in to feed the flame. Supposedly the fire will burn out on it’s own, though I didn’t want my whole stove to melt while I stood there watching!

This will work if the fire is in the microwave, too, as the lack of oxygen will suffocate the flames.

Another good reason to keep the oven door shut is because you could burn your face or set your hair on fire. Fire needs oxygen, as I mentioned, and if you open the door, you could create a massive fireball.

The fire will die down once you shut the oven off. Just stay in the room and keep an eye on things.

Put a Lid On It

If the fire is in a pan on the stovetop, a good way to get the fire out is to cover it with a lid and move the pan off the burner. Turn off the stove. Just as keeping the oven door shut can help suffocate the flames, so too can putting a lid on things.

When you’re cooking in a pan, always have a lid close by. If the pan you are cooking with doesn’t come with a lid, you can always make a makeshift one with a cookie sheet or something similar.

Just make sure all flammable items, like oven mitts and wooden utensils, are stored away from the stovetop.

Once you get that lid on the pan, keep it on their for a long time. It needs to be on there for at least 20 minutes or else the fire can reignite.

Avoid the Urge to Bring it Outside

Some people recommend bringing the pan outside when it’s on fire. This is a bad idea for a couple of reasons. First, do you really want to set your lawn on fire?

Also, if you’re panicking, your hands are likely to be shaking – meaning you’ll splatter grease (and the fire) all over the rest of your kitchen.

Don’t Pour Water on the Fire

It could cause a fireball to flame up and catch the ceiling or cabinets (or you!) on fire (yeah, obviously!). Water repels grease and can cause it to splatter.

Well, it did work for us, but I could see how it could have easily set something else on fire. Am I the only person who didn’t really know this??

Smother With a Wet Towel

Sometimes, in the movies, you’ll see people swatting at a kitchen fire with a towel or apron. Don’t do this! Instead, smother the fire using a large wet cloth or wet towel.

Be extremely careful doing this, though, as it can sometimes cause the flames to push out the back of the pan. Try these other methods in this article first.

Use Baking Soda or Salt

Pour lots of baking soda or salt on the flames, then shut the door! Do NOT use flour, it could catch on fire. It could also cause blow up. Good to know. Baking powder is also not an acceptable substitute.

You Have a Fire Extinguisher, Use It

It’s important to use a Class B Fire Extinguisher though, which is meant for grease fires, otherwise it could cause the grease to splatter and spread the fire.

(Personally, I’d try the baking soda first… but I can’t say that’s the best thing to do, just what I would do.)

When you use your fire extinguisher, aim at the base of the fire – not at the flames themselves. You will need to stand about eight feet away.

Unfortunately, after using a fire extinguisher, everything in your kitchen will need to be thoroughly cleaned.

If you haven’t invested in a fire extinguisher yet, now is a good time to get out. Purchase one that is marked with the “UL” symbol. These are rated for A (combustibles like wood and paper), B (oil and gas) and C (electrical fires).

It needs to be rated B, as most kitchen fires involve grease in some ways. Get the largest fire extinguisher you can, as small ones will require you to get closer to the fire.

Avoid water-based fire extinguishers. These can cause the fire to double in size.

Use a Fire Blanket

Believe it or not, there are handy tools that you can use in a time of emergency – when you need to put out a fire in a snap. They’re called fire blankets.

Fire blankets are designed to be tossed over a grease fire to quickly extinguish them. Unlike throwing a towel on a fire, fire blankets won’t cause the fire to snap up in the back and spread up the wall.

Anybody can use a fire blanket – all you need to do is pull it out and throw it on the fire.

You can purchase these in several sizes, but most measure about 3×3 feet and can be used on any kind of fire, including grease, gasoline, wood, electrical, or even leaf fires.

Get Out and Call the Fire Department

If a fire is growing out of your control, it’s a good idea to just get out and call the fire department.

I know this can be a tough call to make, especially if it means risking losing your home – but the reality is that it’s better to lose possessions than it is your life, right?

Hopefully, though, by following these tips you’ll be able to avoid having to make that decision at all. Remember, safety first, and you’ll thank yourself later!

Have you ever had a kitchen fire? What happened?

"Hi! I'm Kendra. I'm a wife, mother, and homesteader. I love everything that has to do with simple living. I'm a canning instructor, an avid gardener, and a constant learner of old-fashioned skills. Here is where I share it all. Welcome to the adventure!"
How to Make Lard Step by Step
How to Pick the Best Pressure Cooker
Quick and Easy Zucchini Bread
How to Cover Half a Watermelon (Does Plastic Foil Work?)
Chicken and Dumplings From Scratch