Over the past couple of weeks, our egg production has significantly dropped. We were getting 5-6 eggs per day, and then all of a sudden we were getting *maybe* ONE. I wasn’t sure what was going on, until one day I discovered the problem.

Our hens were eating their eggs!

I’m not sure if it was one naughty girl breaking the eggs and then the whole gang jumping in on the action, or if there were multiple delinquents responsible. No matter how hard I tried to beat them to the eggs, they seemed to be waiting for a hen to leave the nest so they could devour the egg while it was still warm. I would be inside the house and hear them cackling (as they do when one has just laid an egg) , but no matter how quickly I threw my boots on and ran to the coop, I kept getting there just in time to find a group of hens fighting over the yolk and broken shell on the coop floor.

I’ve heard that they will eat eggs when they’re lacking calcium. OR, if the young layers haven’t had enough protein, the shells can be very thin and prone to cracking. And once hens get a taste of that fresh yolk, you can be sure they’ll be back for more. It’s an incredibly hard habit to break.

Many resources recommend that you find the egg eater and either separate it from the flock for a while, or cull it (either by butchering, or selling the hen).

After giving it some thought, my first plan of action was to move the nesting boxes. Up until now, the boxes were sitting on the floor of the coop. I figured if I moved the boxes up higher where the eggs would be out of sight from the other hens, that might help solve the problem. 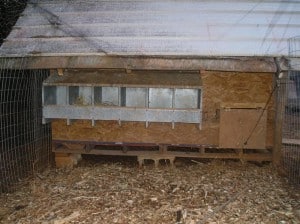 I pulled the boxes out of the coop, cleaned out the old bedding, and sprayed the poopy top off with the water hose. Once it had dried, I hauled it back to the coop and used my husband’s drill to screw the boxes about two feet off the ground, on the outside of the coop. By having the nests away from the roosting area, the boxes (and the eggs) should stay cleaner.

My husband also made a trip to Tractor Supply to get some crushed oyster shells (for calcium) and a poultry block, just in case there was some other mineral deficiency going on.

But before he even made it back home with the supplies, the hens had discovered the new setup, with fresh straw in each box, and within an hour or so I had 3 fresh, clean, UNEATEN eggs to collect!

For good measure, I put a golf ball in a few of the nests to frustrate the egg eater, as recommended by some of you on facebook.

I’m happy to say we’re back up to 5-6 eggs a day. And not a single cracked egg has been discovered since. I’m hoping the trend continues, and that the problem is solved. Of course, you never can be sure what these crazy hens will do, but it seems that all is well again. 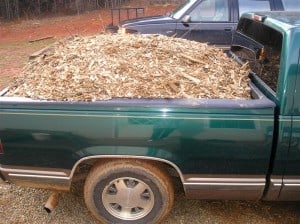 Now that the nesting box has been moved outside the coop, and I’ve got more room inside, I’ve got the bug to do more improving. Jerry didn’t have any work today, so I called around and found a tree removal company that had a ton of woodchips we could come and get for free. Jerry was able to get a pickup truck load, and we spent the afternoon unloading the woodchips and spreading them in the chicken run, which has been nothing but mud for the past week. 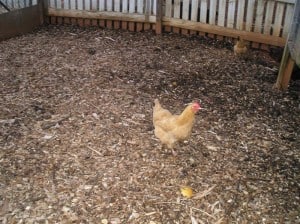 It’s fun watching the flock enjoying their new digs. There are so many things I’d like to do, eventually. Our next project in the coop is to build a separate pen in there for the sick and injured, or for a broody hatching eggs. I plan on taking apart an old rabbit hutch to use the pieces for this project.

Anyways, always something more to do!

Have you ever had trouble with an egg eating hen? What did you do to solve the problem?

19 thoughts on “Egg Eating Chickens & Woodchips in the Run”

"Hi! I'm Kendra. I'm a wife, mother, and homesteader. I love everything that has to do with simple living. I'm a canning instructor, an avid gardener, and a constant learner of old-fashioned skills. Here is where I share it all. Welcome to the adventure!"
So, Can Chickens Eat Grass and Grass Clippings?
Finding Free Range Eggs
So, Can Chickens Eat Zucchini?
What’s That Lump On My Chicken’s Chest? Does It Have A Tumor?
So, Can Chickens Eat Avocado?