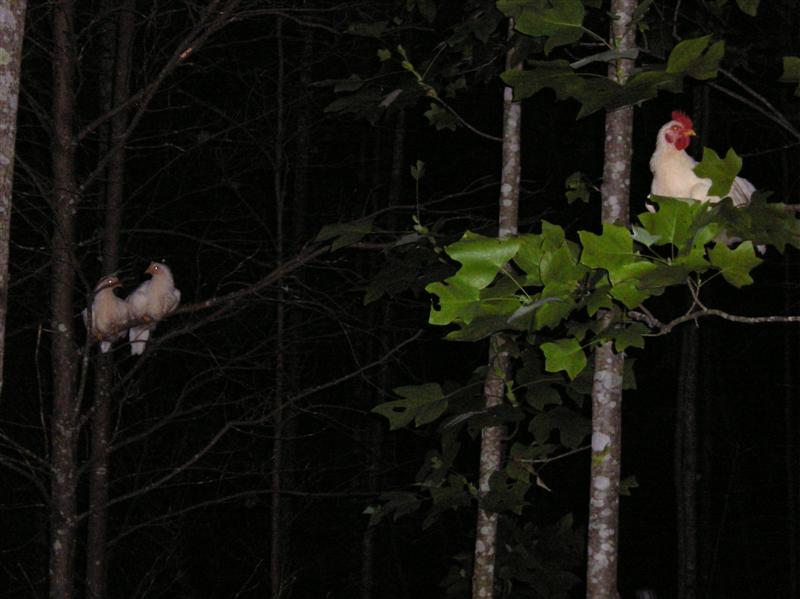 For a while we had trouble keeping our chickens out of the trees. Every evening when I would go outside to put them up for the night I would find them roosting high in the branches above their coop.

We’d have to get a rake, reach up there and get them to climb onto it. Then we’d lower them down and put them back into their coop.

Well, this got old really quick. How could we keep them out of the trees? We don’t want to clip their wings, in case they need to flee from a predator.

Why Do Chickens Fly Into The Trees?

Left to their own devices – and their own instincts! – chickens will more or less do whatever they want. Depending on the personality of your chicken – as well as how flighty it is by nature- it might decide that the treetops are a perfectly fine place to be!

Chickens generally fly into trees for one of three reasons – they are bored, they are threatened by predators, or something in their genetics is telling them that this is a good idea.

In general, chickens prefer to roost off the ground but not too high off the ground. This is because their short, squat bodies and short wings make it difficult for them to catch enough “air” to elevate themselves high into the treetops.

That’s not true of all chicken breeds, though. Those that are wilder and more “feral” by nature – such as Leghorns, Fayoumis, and Araucanas – are simple going to want to take flight at all times.

They are lightweight and will roost in trees whenever they are given the opportunity to do so.
Other flighty chicken breeds include:

Understanding why your chickens are flying into the trees is the first step in getting them to stop. They might take flight out of sheer curiosity – is there a tasty morsel in the tree, like a piece of fruit? – or fear.

There are typically two things your chickens will be afraid of – you, or a predator.

If you’re the cause of fear, you may want to start handling your birds more often. If they fly into the treetops every time you approach, try bringing treats every time you go out for a visit – even if it’s not time to gather the chickens in for the night.

Handle your chickens as often as possible to reduce their flighty behavior.

If predators are to blame, you need to do your best to figure out where the fear is coming from and get rid of that anxiety.

Make sure the coop and run are tightly secured against potential predators, and consider installing lights to spook predators away when they approach in the dead of night.

Should I Let My Chickens Roost Outside in the Trees?

No, you shouldn’t. You might be tempted to say, “screw it!”, throw up your hands, and leave the chickens roosting where they are. After all, it’s going to be tough to get them down!

However, you shouldn’t let your chickens roost in the trees for several reasons. There are a ton of predators that can – and enjoy – killing chickens. Chickens are particularly vulnerable to nighttime predators as they have poor night vision.

They also are more likely to catch a chill or suffer from exposure. Even if it’s the dead of summer when they’re doing this, the occasional rainstorm can soak your chickens and chill them to the bone.

Plus, they’re going to leave droppings all underneath the tree where they are roosting – which in some cases, can add another headache for you to deal with.

How to Get Chickens to Sleep on an Actual Roost

Before you work on getting your chickens to roost appropriately, make sure you are taking steps to keep them adequately contained.

They should be housed within a suitable fence and run not only to keep them contained and out of the trees, but also to keep them safe from predators.

If your chickens aren’t being threatened by predators, they’re less likely to spook and take flight.

Ideally, fences should be several feet tall so flighty birds can’t simply hop over them. You may need to totally cover the run if you have a super flighty chicken breed.

You may also have to resort to clipping wings. This is a somewhat controversial practice, but if your chickens continuously end up in the treetops, that’s a safety hazard that could lead to them getting killed. Trimming wings doesn’t hurt the chicken at all. To do this, you will just need to clip the flight feathers on one wing.

Only cut the hollow quills and avoid cutting too deeply. You will need to redo your trimming every year after the molt, as new feathers will grow back in, but the idea here is that by clipping one wing you are causing your birds to become off-balance so they can’t take flight.

If you raise exhibition chickens, clipping wings is not an option as it disqualifies them from showing. You can, however, brail them, which involves tying up the wing with a soft cord so it can’t be opened for flight.

Lock your chickens in the coop for at least a week. Do not let them out during the day. Make sure they have plenty of food and water (and that it isn’t too hot or crowded). Chances are, when you let them back out, they’ll start returning to the coop at night to roost.

If your chickens still aren’t roosting in the right spot, it might be time to reevaluate your roosts. Are they, for some reason, not desirable to your chickens?

They should be made out of wood, as metal becomes too cold and can actually hurt your chickens’ feet in the winter. PVC or plastic might seem like good choices, but it’s slippery and can injure your chickens, too.

Your chicken roosts also need to be an appropriate height for your birds. Usually, this will be about 18 inches or so, but it depends on the type of chickens you are raising.

Heavier birds and those with shorter legs need shorter roosters, while flightier birds prefer to roost higher off the ground.

The Easiest and Quickest Solution to Getting Chickens Down From Trees

Well, I’m proud to say that I figured out a solution. Every morning I let them out to free range, but I don’t fill up their feed containers.

I let them peck and scratch all day long. Then, around 6 p.m. I go out to their coop and fill their feed container up.

When the chickens see me coming, and hear that feed in the tin container, they all come running and are more than willing to go back into their coop to eat.

I simply shut the door and go in for the night. Problem solved! And since there are only 3 of the original 6 left, I can now sleep at night knowing that they are safe and sound in their coop.

However, it’s only a temporary solution. I’m going to work hard at keeping them where they need to be during the day – and getting them to roost in the coop! – so that this doesn’t keep happening every night.