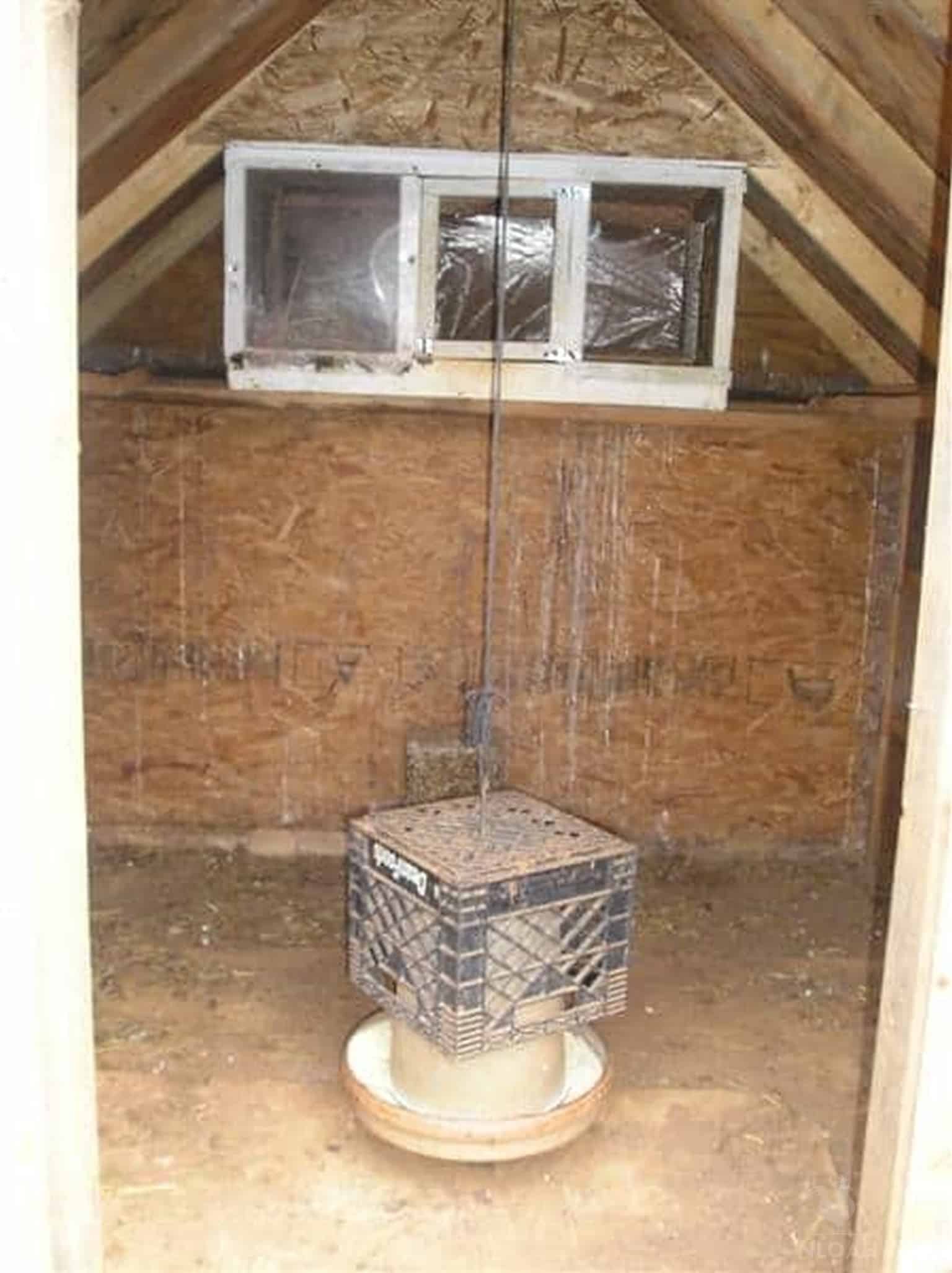 Yesterday, we built a hospital ward in our chicken coop. It’s nothing fancy, just an old rabbit hutch converted into a small pen for times when we need to separate a chicken from the flock.

There was a ledge on the back of the coop that wasn’t being used for anything but roosting which was a perfect spot to add in a cage. The new pen is big enough for two full sized hens, or for a mama hen and several babies.

When you’re raising backyard chickens, it’s important to have a separate area where you can keep sick, injured, or broody hens.

If one of your chickens begins to show signs of being sick, you want to quarantine them right away just in case it’s something that might be contagious to the rest of your flock.

Keep the sick chicken away from the others until it either gets better or it dies. If it dies, be sure to sanitize the pen with bleach before using it again.

If you have an injured chicken, especially one that is bleeding, the other chickens will begin to bully it and will actually peck it to death if you don’t separate it until it has completely healed.

If you have a broody hen (one trying to hatch a clutch of eggs), it’s best to separate her and her nest from the rest of the flock.

Do this at night, as carefully as possible, so as not to ‘break her up’, or cause her to stop sitting on the eggs. You don’t *have* to separate a broody, but a couple of things could happen if you don’t…

While she’s sitting on her nest, other hens may climb in there with her and lay eggs in the same nest. When they leave, that mama hen will take her wing and gather that new egg in with the rest.

If you haven’t marked which eggs she’s been sitting on, you won’t know which egg is the new one. Soon, she will have more eggs in the nest than her body can cover, and some of the eggs will be pushed out from under her and away from the heat of her body.

If any of the eggs she had initially been sitting on, which would have partially formed chicks in them, aren’t kept warm, the chicks will die.

The new eggs will begin to grow chicks, but because they would have been laid later than the rest of the eggs, they’ll hatch later.

If they don’t hatch within 3 days of the first eggs to hatch, the mama hen will leave the nest to take her chicks to look for food and the almost ready chicks will be left in the cold and will die.

Of course, this is all assuming you have a rooster to fertilize those eggs to begin with.

So, if you do decide to leave a broody hen in with the rest of the flock, make sure to write the date on each egg underneath the hen, and don’t let her sit on more eggs than her body can cover (12 if she’s a large breed hen).

Also don’t let her sit on any eggs that have been laid more than three days after she first started sitting on them.

The incubation process begins the day she starts sitting on those eggs. You’ll have to pick her up and count her eggs every day to make sure you don’t have any new, unmarked ones in there.

Another problem with leaving a broody in with the rest is that the other hens could peck the newborn chicks to death.

A broody hen is very protective of her babies, and she will defend them in most cases, but if your flock decides to gang up on a chick, there isn’t much she can do to stop them from killing it.

I’ve lost one of my chicks this way when it wandered away from mama. It’s best to just keep them separated until they’re big enough to fend for themselves.

You’ll also need to feed baby chicks a different type of feed than you would the rest of the flock. If they’re all in the same pen together, the big hens will eat up all of the chicks’ starter feed, and the chicks may eat the hens’ laying mash, which is lower in protein and will mess up a developing chick.

It really is difficult to make sure chickens of different ages and stages of growth are eating what they should if you have them all mingled together.

Another good reason to have a separate pen is to quarantine new additions to your flock. Anytime you acquire a new chicken, it’s best to keep it separated from the rest of your hens for a week to make sure it isn’t sick and carrying a disease that could get the rest of your flock sick.

This is why I’ve been dying to have a coop within a coop. Up until now, we’ve used another large rabbit hutch for separating our hens or chicks as needed. But I’m going through a major yard declutter phase, and I really wanted to reduce the amount of “structures” you see around our home place.

By taking the legs off the old rabbit hutch, and moving the house part of it into the coop, I’m still putting it to good use, in an out of sight place.

Plus, with it being inside the larger chicken coop, it’s better protected from predators, such as raccoons. (I’ve had a raccoon reach up through the wire floor of our rabbit hutch, and rip a chick right through, completely dismembering it in the process. So sad.)

I’m so happy to have this new addition to our coop! Like I said, it’s nothing fancy, but it’ll do the job perfectly. Jerry closed off over the top of the hutch so the chickens wouldn’t roost up there and poop it up.  I think I’ll hang a sign above it that says something catchy.

What do you think about my hospital ward?