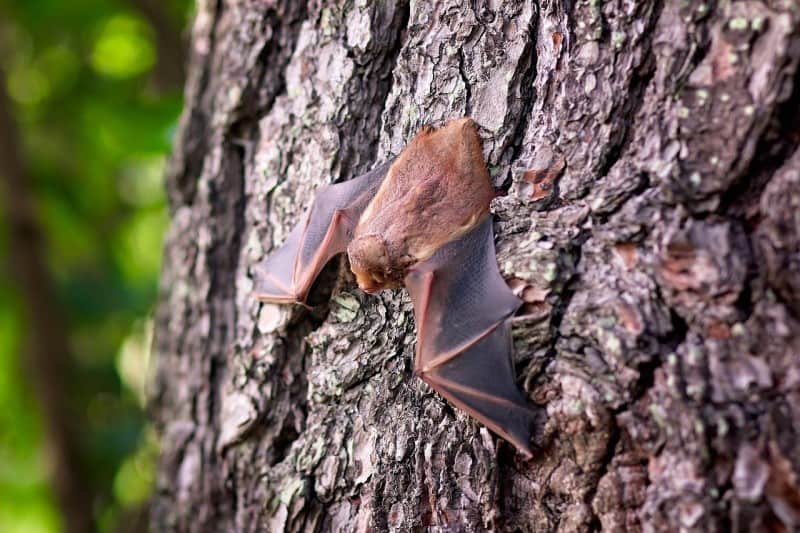 Bats have gotten a bad rap over the years, thanks to their associations with blood-sucking vampires, and the scare of them carrying rabies. However, despite these myths, bats are actually really useful in the garden.

In fact, only 3 species of bats carry rabies and all of them live in Central and South America. Instead, bats – which are the only flying mammal – spread much more useful things such as seeds, fertilizer, and nectar.

Why Attract Bats To Your Garden?

For anyone who enjoys sipping on a cold glass of white wine in the garden over a summer’s evening, mosquitoes can be a real issue. Aside from the fact they can spread a number of diseases, they have an annoying bite that really irritates you – especially if you’re allergic.

Luckily, bats eat mosquitoes, so with more bats in your garden, you’ll have a lower mosquito population.

Bats are an incredible technique for pest management in your garden. Depending on where you live and the climate you live in, bats can help to lower the insect population. If you live in a temperate climate, you’re more likely to be exposed to microchiroptera bats, which eat insects.

These bats will swoop down over water to guzzle tasty insects breeding on the surface, as well as eating bugs that inhabit your plants and flowers. Bats love to eat mosquitoes, but they’re also big on caterpillars – which saves the leaves of your plants – and some flying beetles – who tend to lay larvae that eat roots.

By encouraging bats to nest in your garden, you bring a predator of these pests, which helps to control the population.

Not many people realize that bats are very important pollinators. In fact, there are some species of plants, such as the agave (used for making tequila), that relies solely on bats for pollination.

It is said that bats are integral to the pollination of over 500 different plant species, including peaches, bananas, mangoes, guavas, avocados, cloves, eucalyptus, cashews, dates, and figs.

Bats are important reforesters. Studies have shown that forest regrowth is mostly due to bat populations, and declining bat populations lead to dwindling forest growth. This is because fruit eating bats spread seeds. They eat the seeds, fly away and excrete the seeds in a different location.

This is especially true of pioneer trees – the first trees in the forest’s succession. These trees, while not always terribly useful for food, tend to provide shade and shelter for the next level of useful plant to come through (usually berry bushes). You’ll find that bats spread date, fig, and cashew seeds especially well – these trees grow very quickly and are considered pioneers as well as being edible delights.

By giving bats a place to roost, you may find that they bring interesting species of plants with them as they excrete seeds. The other way round, bats may take your seeds elsewhere and help with reforestation – improving the overall environment. For people with larger properties that contain forest areas, you’ll find more healthy growth with a higher bat population.

What goes in, must come out, and bats on your land will excrete into your beds (if your bat box is well placed). Bat excretion is known as guano and is one of the most rich forms of manure.

Guano has the ideal ratio of nitrogen, phosphorus, and potassium. These are the three ingredients in chemical fertilizers. With more bats in the garden, you have a much richer and more suitable source of fertilizer without having to pour chemicals on the ground.

Moreover, guano is rich in good bacteria and fungus that help to move succession along in your garden. In this sense, by introducing guano to your soil, your mulch will break down more quickly and effectively, releasing nutrients for plant growth.

Guano is also fungicidal. If you have plants that are susceptible to verticillium wilt or powdery mildew, like tomatoes, strawberries, melons, and eggplants, guano can help to keep back unwanted fungi like these. Additionally, similar to the toxin in marigold roots, guano kills nematode worms that cause root damage to plants.

How to Attract Bats to Your Garden

The main ways to attract bats are to build them a suitable shelter, make sure they have food, and ensure they have a water source.

Depending on your geographical location, you’ll have different types of bats. In temperate climates, the predominant species of bats eat insects and fly at night. They are smaller, with shorter noses, and tend to live in caves of the hollows of trees in small groups. These are known as microchiroptera.

Megachiroptera tend to live in hotter climates and eat nectar and fruits. They have longer noses and live in forests in large nests of many many bats, and often cause disturbances with their large noises. They are much bigger than the insect-eating bats of more temperate climates.

Knowing the types of bat that are native to your area can better prepare you for how to attract them. You’ll have a better understanding of how to build shelter and where to put it, along with the types of food that will best attract them.

It’s important to understand that bats like to live in certain environments. Because they use echolocation and passive listening to get around, they prefer to be in quiet environments that are sheltered from conflicting noises. If you live next to a busy road, think about here the most quiet spot is on your property. Equally , if you have a barking dog, keep it away from the kennel.

You also want to consider predators. If you place your bat box in a big open space, predators, such as hawks and owls, will be able to swoop down and grab the bats when they exit the bat box. That said, you don’t want to place it in really crowded areas with lots of branches, as this can confuse bats.

Equally, while bats naturally live in trees, these are easy places for predators like racoons to cimb up. By putting your bat box on a high up (above 15 feet) on smooth pole or the side of a building, you reduce the chance of predators getting to it.

Another important point, especially in cooler climates, is that bats like to keep warm. 80-100 degrees fahrenheit is the perfect temperature for mother bats to raise their young. You need to keep this in mind when placing your bat box, as you’ll want it to face the sun for at least 6 hours a day. That means positioning it so that it faces south (in the northern hemisphere).

Bat boxes are not like bird boxes. They need to be tall and flat (instead of cubed like a bird box), and they have their opening on the bottom. At the bottom of the back of the bat box, you’ll have a slightly longer piece of lumber covered in mesh, so the bats can crawl up inside from the bottom edge. Inside, you want there to be a wall in the middle, covered in mesh, and a wall at the back covered in mesh, for the bats to crawl up and hang from.

Bat boxes needed vents because bats like to pack in tightly together to preserve heat. However, in doing this, they produce a lot of carbon dioxide. This needs to be able to escape so that they don’t suffocate, so you’ll want slits on the bottom of the sides and front, about a quarter of an inch in size, to allow air to flow through.

As bat boxes will hold more than one bat, the smallest size that is viable is 13.5 inches wide, by 3.75 inches deep, by 20 inches tall.

All you will need is: a pole for mounting, plywood, mesh, dark paint, screws, a screwdriver, a saw, and a staple gun.

Remember, that bats like the warmth, so painting your bat box a dark color, like black or brown, will absorb the sunlight during the day, keeping it nice and warm inside.

Another thing to consider is the placement for your benefit. By placing bat boxes over certain garden beds, you can take advantage of the fertilizer that is excreted during the night time.

You may want to mount your bat box on a moveable pole so you can change its location. Alternatively, place a bucket underneath to collect manure that is released during the night – you can make fertilizing manure teas with this to spray on your garden beds.

As bats fly at night, you want to plant night-blooming flowers as these will attract more bats. The best flowers are pale in color or white, not because the bats can see them, but because these attract far more bugs for the bats to eat.

For bats that eat nectar and fruits, it’s important that you implement native night bloomers as bats will only really eat things they know from their environment. The plants should be extremely fragrant as this attracts bats more easily (as they’re blind!). Bats are attracted to plants with high levels of alcohol, esters, aldehydes, and aliphatics in their nectar as these are very pungent chemicals.

Here are some great night-blooming flowers for your moonlight garden to attract bats:

Give Bats a Water Source

Bats like water for two reasons. Firstly, for insect guzzling bats, they find water as a great place to hunt for food, as insects like mosquitoes like to lay their eggs on the water, so they tend to hang out there. Interestingly, as bats can swim, some like to also eat frogs and fish and will swim dive into the water to hunt for food.

Secondly, bats like to drink without landing. They skim the top of the water and sip little mouthfuls. If you have a pond, this is a great place for them to drink safely without being subject to predators.

However, if you can’t introduce a big body of water, a bird bath will also work. Bats need to be able to climb out the water quickly, however, so ensure you give them a place to exit.

High walls make it hard for them to get out, leaving them exposed to predators. Make low walls and a ramp to get out. Score the ramp so it is easier for them to climb out with their claws.

If you’re looking to add high quality fertilizer to your garden, while increasing pollination for higher yields, and keeping down the insect and mosquito population, bats are a great way to do this. By inviting them into your yard, you get all the benefits of these night fliers.

You want to make sure they have a quiet place to roost, that stays warm in the day and is out of reach of predators, along with a rich source of diversified food and an accessible water source.

It’s been noted by researchers that if you put a bat box up and prepare you area, it will be inhabited almost instantly – often within one hour!

Print or Save this article as PDF
Jessica Faidley

Jessica Faidley is a stay-at-home, work-from-home, homeschooling mom who loves to teach her children how to live off the land.

Herbalism is another topic that Jessica has studied. Keeping herself and her family healthy through a natural approach is her way of doing things.

1 thought on “How and Why Attract Bats to Your Garden”