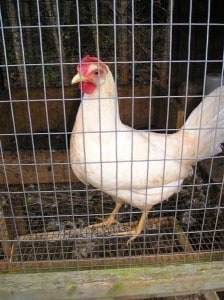 So, if you remember from a while back, my chickens stopped laying for a couple of weeks when we made the mistake of switching their food from laying mash to just straight corn feed. After getting them used to a mixture of the two types of food for a couple of weeks, the chickens were back on track, and laying better than ever!

I was also free ranging them during the day, and they were happily giving us like 7 eggs a day! But then I started losing chickens. For four days in a row every evening when I would put them up, I would count one less chicken. I decided I would have to keep them cooped up for a while.

I figured the girls were made at me. They were protesting their loss of freedom. They couldn’t hold their eggs in forever, could they? I also noticed that their cages were full of feathers. Man, they were stressed out!

But I started talking to my homesteading friend Melissa, and shared with her my frustrating chicken dilemma. She suggested that it could be due to them molting. She said that when they molt, they stop laying for a while. And if they were all about the same age, they could all be molting together.

Ah ha! That was it! That totally explained the loss of feathers and lack of eggs. And most of the chicks were just about the same age, so that made perfect sense. So, she solved the mystery.

She also told me that the chickens will stop laying so much at this time of year, when it’s beginning to get cooler outside. I sure am glad I froze a bunch of my eggs when there was an abundance of them! (Though they aren’t good for frying up, they are perfect for baking with.)

So it’s been back to store bought eggs for breakfast. Oh well. It’ll be nice when we get our fresh eggs back!

3 thoughts on “Why Chickens Stop Laying”