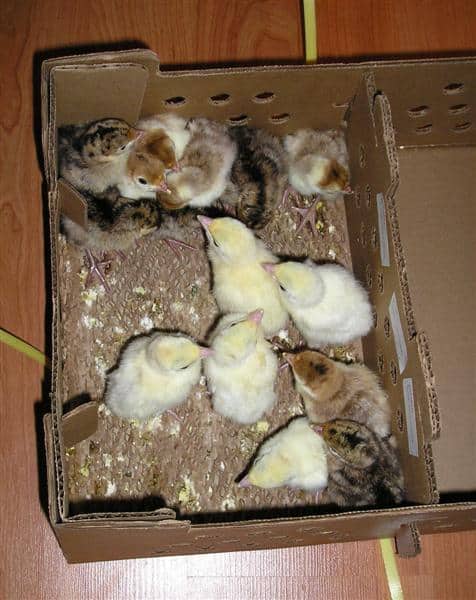 They arrived this morning with another 6:30am phone call from the post office.

Our turkeys are here!!

And gratefully, another box full of healthy, beautiful birds!

I ordered 15 in all, to be split between us and three other friends. Five Royal Palms, five Bourbon Reds, and five Narragansetts. I’d originally ordered Broadbreasted Bronze Turkeys, but they didn’t hatch well and had to be substituted with the Narragansetts. But that’s cool.

I put them in a brooder with our newly hatched guineas.

Here they are sleeping all snuggled together under the heat lamp. I swear, every time I see one laying like this I’m afraid it’s dead! Aren’t they ADORABLE?!

They’re all doing fine for their first day in our home! It has been so funny watching them, and hearing the new noises they make.

I LOVE HAVING TURKEYS!!

I’m not sure yet which breeds we’ll end up keeping, but I’m REALLY hoping for a breeding pair. They send them to you straight run (meaning it’s a coin toss which gender you’ll end up with), so I won’t know if I have a male and female until they’re a bit older.

And any advice would be greatly appreciated. Please and thank you.