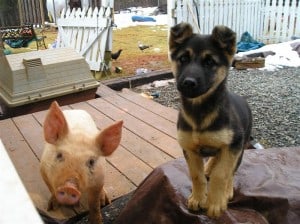 So, a lot has happened with the pig since the last time I wrote about her. I had decided that I’d let her free range, and was letting her out of her pen during the day so that she could forage with the goats and chickens. That went fine for a few days, but one day in particular I opened the door to let her loose, and instead of running off to play she decided she’d start bumping my leg with her snout.

Frankly, this scared me. Was she gonna bite me? I liked it much better when she was scared of me! But that day she was feeling brave. She came charging out of her pen and went straight to my heels, nudging them and squealing like she was being branded with a hot poker! Yeah, I was pretty intimidated.

I tried to nudge her back with my foot, but she just shoved me harder and squealed louder. I took off running to my backdoor. She matched my pace; she was on my heels the whole way! I jumped up on the back steps, flung the door open to jump inside, and slammed it shut again before she could get in. She stood on my back steps squealing at me. Oh my goodness! This was so not cool.

I was able to lure her back into her pen with food later on, but decided that I was not going to let her out any more. She was becoming too aggressive. That evening I told my husband what she had done. He shared with me that the day before she had bitten the top of his shoe. Yup. That was that. I was not gonna get bit by a pig!

Every day I would go out and put food in her bowl, careful to not let her get out. In just a matter of a couple of days her whole pen was nothing but mud. She had turned over her food and water containers and the house we had her in, and was going crazy squealing and biting the fencing trying to get out. Every day she seemed to be getting more aggressive.

I started feeling really bad for her though. I couldn’t keep her like that. Maybe she was just lonely. She is still a baby, after all. So, after about a week of confining her, I let her loose again. I know, I know, I’m such a sucker. I really am normally more consistent than this! I’m just so unsure still of what I should be doing. Truly, we had no idea what we were getting into.

When I finally did let her out again, I went prepared. With me I carried a bag of hamburger buns, which I dumped on the ground before opening the pig’s pen. I had barely cracked her door open, when she shoved through and went straight for the bread, giving me time to book it back to the house before she could get to me again. It was nice seeing her enjoying herself in the yard again though.

We figured that she was probably lonely, since pigs are herd animals. So we thought we’d try putting her in with the goats. I was kinda afraid she might try to bite them or something, but she never bothered them. She just tagged along behind them, grazing where they grazed. It actually made it easier for me. During the day I would open their cage and let them run loose, and in the evenings the goats would just go back to their house when it started getting dark, and the pig would follow along. We’d go out to shut their door for the night, to keep them safe from dogs, and there they would all be snuggled together in the warmth of their cozy little house.

The pig was finally happy. And the goats didn’t seem to mind her at all.

The leg bumping thing, however, did not stop. Every time I would go out and open their door Pork Chop would run after me and shove me around with her snout. For a while I just opened her door, and took off running to get inside before she could catch me. But that got old. Was I gonna let a baby pig intimidate me? Me!? No way. I had to braven up! 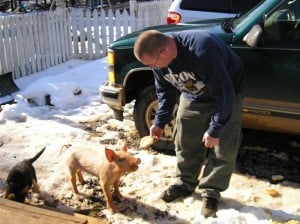 My husband was braver than me though. Whenever the pig would nudge him, he would reach down and scratch her back. She would squeal like crazy, but she never tried to bite him or anything. She actually seemed to enjoy it! It cracked me up to see him rubbing her and her squealing in delight. He even hand feeds her… carefully of course.

Okay, okay. My turn to be brave.

A few days later I was trying to hang clothes on the line, when the animals spotted me outside and decided to bombard me from all sides. The chickens and goats were all under my feet, and little ms. piggy was squealing and shoving her way between my legs, and nudging at my feet. (Man, I wish someone had been around to get a picture of that!) I kept telling her, “Baby, leave me alone! I’m trying to do some work here! Don’t bite me, okay!? I’ll pet you in a minute.” And after I was finished hanging the diapers on the line, I gathered my courage, reached down, and scratched her back.

Now, I had no desire to scratch her back. Pigs aren’t soft and fuzzy like I thought. Pig hair is course and wiry. Nevertheless, I scratched her, and rubbed her, and scratched her some more. Boy, did she love it! I laughed.  So that’s what her problem was. She just needed a little love!

She’s still entirely too friendly, in my opinion, but when she comes at me all crazy I just rub her, and ask her kindly not to bite me! She likes to hang out on the back steps with the dog, hoping I’ll throw out some food or something, which I do on occasion. It’s a good thing we don’t have neighbors. They’d think we’re nuts. Maybe we are.

So… my plan is to keep the pig in the goat’s pen. This is pretty genius, really. See, the area we’ve fenced off for them is in a great spot for a garden, but it’s all grown up with thick weeds and roots. Well, pigs are great at tilling up the dirt, and eating roots and stuff. So the idea is to have her clean out that spot, and get the soil nice and turned over. Plus, all of the manure from the animals will add some great nutrients to that spot. I think it will make a perfect corn patch in a year or so. Pretty good thinking, huh?!

Anyways, that’s where we are at the moment. What in the world were we thinking? Tell me it will all be worth it in the long run!