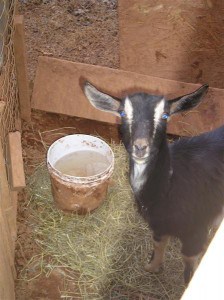 Here’s Flurry, in her temporary pen.

We got a new goat over the weekend. Her name is Flurry. I’m not sure what kind of goat she is. She’s about a year old now, and still pretty tiny! She was the smaller of a set of twins, and was babied by her owners, so she’s super sweet.

A friend of mine gave her to us ’cause her other goats weren’t letting Flurry get any food, and were bullying her. As we were picking her up, my friend pointed out that there was a bald spot on the goat’s side, and said that it was just “rain rot” and to rub any old fungicide (even for athlete’s foot) on it, and that it should go away pretty quickly.

I didn’t really look her over, just assumed she was fine and took her home. Well, once we got her back to our place I noticed that she had some major dandruff. Not thinking much of it, I put her in the pen with Mocha and went inside to look up “rain rot”. While I was searching I came across some articles about goat’s having dandruff. Turns out that noticeably flaky skin is a major sign of lice!

It was getting dark outside. Should I separate the goats? What if Flurry does have lice? I don’t want my beautiful Mocha to get it! What if she has something else that Mocha could catch?

I debated on what to do. I didn’t have anywhere to put Flurry. I really didn’t want to infect Mocha though. I went outside in the freezing night with a little flashlight to check on the goats. They were both in their house. I figured it was probably too late to do anything anyways, they’d already been together, so I left them there.

The next morning I went outside to check her out better. Wearing a pair of rubber gloves, I pulled back some fur from her back and took a closer look. Sure enough, there were little tan bugs crawling all over her!

Yes. I freaked out. Not sure, but I’m assuming they are lice.

Now my head is itching.

Great! What do I do?

I cleaned out the dog lot where we were keeping the pig, and put Flurry in there to keep her separated until we fix the problem. The pig is now back in with Mocha.

I’ve been asking around for advice on how to treat lice. I found a billion different suggestions, but nothing that says “this will definitely work”. On one forum somebody said that they’ve successfully treated their goats with Sevin Dust for years, soooo… that’s what I’m trying first. I’ve sprinkled her back and her bedding. *Hopefully* that will do it.

Now I guess I have to wait to see if Mocha gets it. I’ve cleaned out her bedding as well. Just gonna keep an eye on her. Maybe I’ll get lucky and she won’t get infested too.

Oh, and because I know you are wondering, No, people cannot get lice from goats. That’s what everything says anyways, so I just keep telling myself that every time my scalp crawls!

I have to be honest. At first, I was totally disgusted and wanted to take her back right then. I do not want a goat with something that can spread to the other animals!

But then I was reminded… this is homesteading. Animals get yucky stuff. You can’t keep them perfect forever. And you shouldn’t get rid of one just because it isn’t perfect. This is treatable, it will just take a little bit of work.

So, we’re gonna bite the bullet and get whatever is necessary to take care of the bugs and get this little goat healthy again. In the meantime, we’ll keep her separated from the other animals until she’s all cleared up.

Which brings us to the big lessons learned:

1. Always check over a goat to make sure that it is in good health before bringing them home, no matter where you are getting it from!

2. Always keep a new goat separated from the rest of the herd for the first two weeks of having her home… just in case she does have something they could catch!

Print or Save this article as PDF
About Kendra 1035 Articles
A city girl learning to homestead on an acre of land in the country. Wife and homeschooling mother of four. Enjoying life, and everything that has to do with self sufficient living.