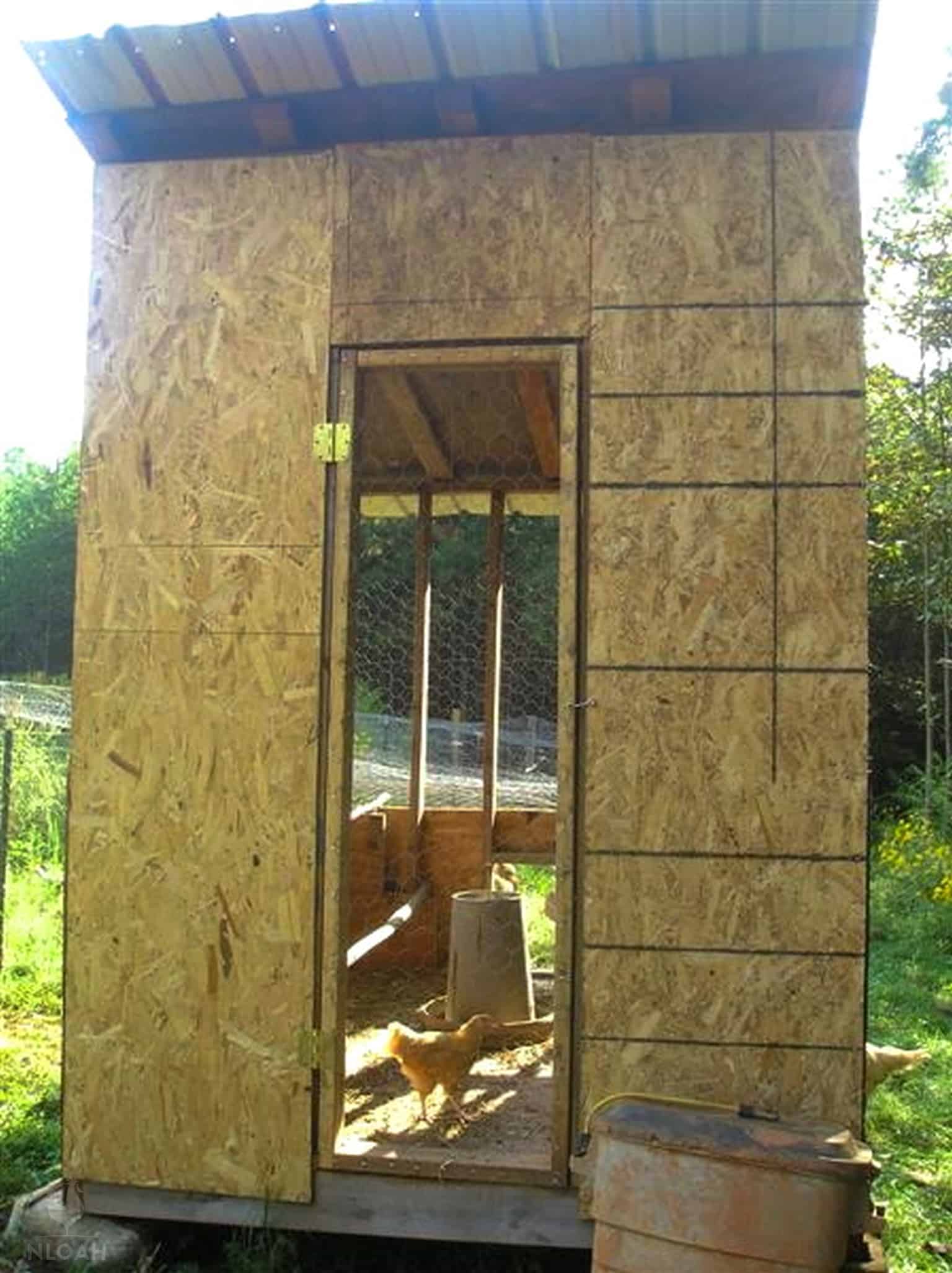 Well, here’s our new chicken coop. We’ve moved the hens and one roo from the rabbit cages to their new super deluxe condo! Made completely free from scrap materials we’ve had laying around.

We had to prop one side of the coop up on blocks since it was built on a slope. We had some bags of concrete that had gotten wet and turned solid, so we used them as well as some cinder blocks and bricks to hold the corners up off the ground.

Then Jerry just built the frame from 2×4’s, covered the floor with plywood, and built the walls up. The dimensions are 6’x7’x7′. For the roof we covered it with plywood and some scrap metal sheeting somebody gave us. We also made it slope so that the rain would fall off.

The walls are mostly chicken wire, as you can see. Jerry is thinking we’ll wrap it in heavy plastic over the winter. I’m not sure I like it like this,  but we’ll see. The whole front door is chicken wire as well, with a latch hook to keep it closed.

Here’s the backside of it. (Notice the roosters scrapping through the fence… that’s another story!) There’s a hinged door on the back side that opens into the covered yard.

We’re going to rig some contraption for opening and closing that door from the outside. For now, we crawl into the run to open the door in the mornings, and close it up at night.

On the inside of the coop we have roosts on one side made from small tree trunks. They are staggered so that the hens roosting above don’t poop on the ones on the lower roost.

There are 6 laying boxes up on the other wall, 12″x12″. We put a piece of wood as a lip to hold the bedding material in because hens will scratch around a lot before laying. There’s another small tree trunk roost in front of the boxes. Most of the hens like to roost on top of the boxes at night.

The feeder is in the middle of the house so that they don’t poop on it. I may have to suspend it from the roof, or the bottom of the laying boxes though, if they start perching on it. I keep a big waterer out in the yard.

Here’s the run, or really, “yard”. We used metal stakes around the perimeter, and attached chicken wire to them (that was a pain!).

Then we ran the chicken wire over the top, and secured it by twisting the wires together or using sandwich bag twistie ties.

We also used metal stakes along the bottom of the fence to keep it flush with the ground. One side was attached to the garden fence, to save on fencing materials.

We have 11 Buff Orpingtons in there, 9 Bantams, one Rhode Island Red, and two White Leghorns, and there’s plenty of room. I think they are happy with their new setup! And I love that I can let them out and know that they will be safe from predators.

13 thoughts on “The New Chicken Coop and Covered Yard”