When we first moved to our land, this section of the property was full of brambles and brush. It doesn’t look that bad here in the picture ’cause it was winter time and everything was dead, but believe me, when it was green it seemed it would be impossible to clear out. It was in a perfect location for a garden though, so we really wanted to get rid of the overgrowth.

We decided we’d fence it in and put a couple of goats in the lot to clear out the weeds. They did a fantastic job of clearing most of it, but there were still a few thick plants, stumps, and large rocks that were in our way. So, we put a pig in there. The pig was exactly what we needed to till up this piece of dirt. Not only did the combination of the goats and the pig work wonders for clearing the brush and unearthing large rocks, they also helped this future garden area by fertilizing the ground.

Eventually, we sold the pig and those particular goats, so we didn’t need to use this spot for a pen any longer. This Spring, the fence came down and Jerry went at it with a tiller. We couldn’t believe how nice of a garden area it had become. Jerry worked hard hoeing rows and planting corn. We also put several mounds of soil in the corner of the lot for watermelons and pumpkins.

As our seeds have begun growing into beautiful plants, we’ve noticed something humorously unexpected. In between the rows and cornstalks, random plants are growing. But they aren’t just weeds… they’re edibles!

We first noticed them as we were weeding one day, and right off the bat we could tell they weren’t like the rest of the invaders we were busy uprooting. They were definitely worth keeping… but what were they exactly? It was a guessing game for a while!

It has been really fun watching over the past two weeks as these plants have grown, blossomed, and have finally begun to fruit.

There are still a few plants that are unidentified as of now. But I’ve definitely counted 9 watermelons, 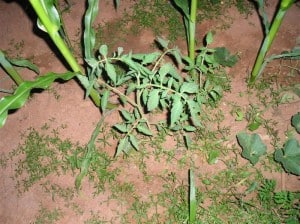 3 tomato plants (which, by the way, may have to go as they are not supposed to be planted with corn), 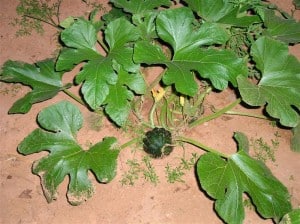 an acorn squash, and… 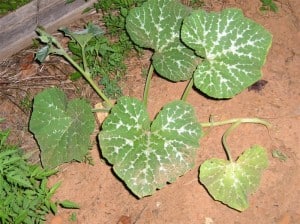 Anyone have any idea what this could be?? I’m DYING to know what it is!! It’s much too pretty to be a weed!

I gotta say, I’m having a lot of fun watching how this silly garden develops! I’m excited about the acorn squash, too. I don’t even think I’ve ever had an acorn squash! And if we get as many watermelons as I see growing on these vines, we’ll be some very happy gardeners!

So, just where did all of these random plants come from you ask? When we first noticed all of the watermelon vines sprouting at the same time the ones we had actually planted were coming up, I playfully accused my husband of having a hole in his pocket. But he swore up and down that he didn’t have the watermelon seeds anywhere near the corn at planting time. We laughed as we realized that all of these volunteers no doubt came from stuff we’d thrown to the pig at some point. It’s amazing the seeds survived in the ground since last Fall, and had even been tilled up and everything!

I don’t know how well our corn will do this year, but at least if it doesn’t do well we’ll still get something from this plot!

I love having a mystery garden.